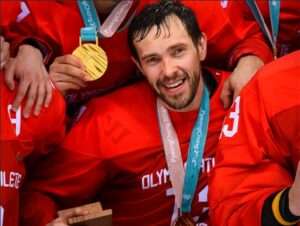 Datsyuk won the Stanley Cup with the Detroit Red Wings in 2002 and 2008, and he won World Championship gold with Russia in 2012. And now he won Olympic gold with the Olympic Athletes from Russia in an overtime win in the final against Germany.

“I’ve not even thought about the Triple Gold Club yet,” he said after the game. “But when it sinks in, I guess I’ll need a new dream to shoot for because all my dreams have come true.”

Russia had six previous TGC members, including Valeri Kamenski, Alexei Gusarov, Vyacheslav Fetisov, Igor Larionov, Alexander Mogilny, and Vladimir Malahkov. Datsyuk is the first Russian to join since Malakhov & Mogilny in 2000 after winning the Cup with the Dallas Stars.