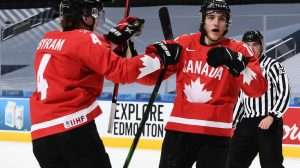 Defending champions Canada stormed out of the gates, scoring early and often in a 16-2 victory over Germany in its first game of the 2021 World Juniors. It was the second loss in as many days for the 14-man German squad that has been hammered by positive Covid results and the ensuing quarantining of nine of its players.

Dylan Cozens led all scorers with three goals and six points while Dawson Mercer had two and two.

“It’s the first game of the tournament, and we have to establish our good habits,” Cozens said. “We want to play the right way, so just because we’re up by a lot we’re not going to change. We want to pretend it’s a close game and keep those good habits. We weren’t too focused on the score, just playing the right way.”

Canada now owns a decisive 15-0-0 record over Germany in World Junior history, with a goal advantage of 91-21 all-time.

“It’s not about the score,” coach Andre Tourigny reiterated. “It’s about our play to move forward in the tournament. We have no time to waste. The thing I liked the most about our game tonight was our third period because that’s the period we were the best at doing the little things, all the stuff you need to do to win, winning faceoffs, battles in front of the next, that sort of thing.”

Tonight, the short-handed Germans had no chance against a Canadian squad wearing their Summit Series-inspired sweaters and chomping at the bit to get started.

“It’s obviously very disappointing,” said Samuel Dube. “But all we can do now is focus on the next two games and winning those two.”

“We were tired, but we’re not looking for excuses,” added John Peterka. “We knew we were short-handed, but in the end we have to skate and battle hard. We didn’t do that.”

The Germans now have a day off before two critical games against Slovakia on Monday and Switzerland on Wednesday, games that almost certainly will decide who advances to the quarter-finals. Canada is right back at it, facing Slovakia tomorrow afternoon.

“You have to give a lot of credit to the Germans,” Tourigny added. “They’ve had sickness on their team, playing two games in 24 hours against two really good countries. They fought hard, especially in the first period.”

While Devon Levi had a solid two periods in goal for Canada, Germany was also undone by some weak goaltending from Arno Tiefensee, who also played 24 hours ago. He should have had the first goal, just 1:51 in the game, which came off a short-side shot from Kaiden Guhle.

Moments later, Levi made his finest stop of the opening 20 minutes, a desperate left pad save while on his stomach as Tim Stutzle tried to slide the puck around on a nifty deke.

Canada made it 2-0 at 7:27 when Tiefensee mishandled the puck behind his net on a Germany power play. Dawson Mercer stripped him of the puck and wrapped it in the vacated cage.

Canada’s Braden Schneider took a senseless penalty for a direct hit to the head of Jan-Luca Schumacher. After gaining his composure, Schumacher was able to leave the ice without help, but Schneider was given a five-minute major and game misconduct. Late in that lengthy power play the Germans cashed in. Florian Elias made a brilliant pass to John Peterka, unguarded in the slot, and he whistled a shot over the shoulder of Levi, who had dropped to his knees.

Philip Tomasino got that one back for Canada. After skating patiently down the right side, he wired a low shot to the short side as Tiefensee moved off his post. But the backbreaker came as time expired. Germany was short-handed thanks to a penalty for too many men, and after Tiefensee failed to control a routine shot Peyton Krebs jammed the puck over the goal line.

Although video review seemed to show time had expired before the puck crossed the line, the referees indicated otherwise. That goal made it 4-1, and took the wind out of the German sails.

Coach Tobias Abstreiter put Jonas Gahr in to start the second period in place of Tiefensee, but things went from bad to worse as Canada racked up seven goals, the last of which, as in the first period, came in the dying seconds and was confirmed by video review. In this case, the goal, by Krebs again, was the result of a quick shot that went in and out too quickly for the officials to see during game action.

Alex Newhook scored twice in the second, and in addition to Krebs, Tomasino and Mercer also scored their second of the night. The seven in the second tied a team record.

Tourigny took advantage of the blowout to give his other goalie some playing time, and so Dylan Garand stepped into the blue ice only to stand idle most of the final 20 minutes. He stopped four of five shots he faced.

Just 37 seconds into the third, Cozens scored his second of the night, on the power play, and the 12-1 score just made things worse. He scored again soon after to complete the hat trick, the first of this year’s tournament.

Florian Elias scored for Germany on the power play with 18.3 seconds left to finish the scoring.