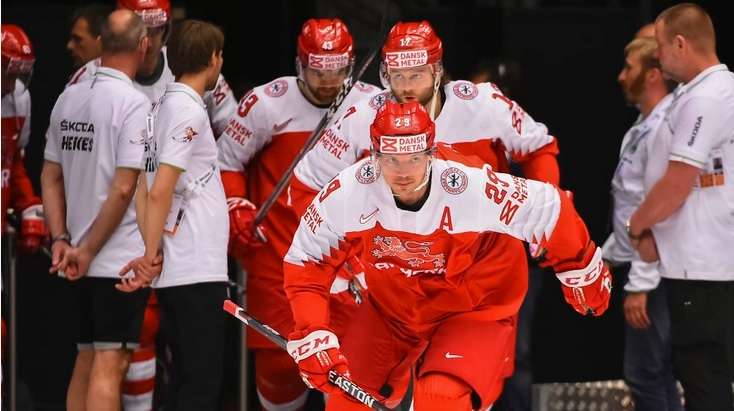 Denmark enters the 2021 IIHF Ice Hockey World Championship in Riga in search of its first quarter-final berth since 2016 and third all-time. While that’s certainly a long shot, anything is possible in this season like no other.

This isn’t the strongest team ever iced by the Danes, who currently sit 12th in the IIHF Men’s World Ranking, but they’re a tight-knit group. If all the pieces come together like a LEGO model of Copenhagen’s Amalienborg Palace, the Danes might have something to smile about in early June.

Sebastian Dahm has served as Denmark’s number one netminder at four out of the last five Worlds. The exception was 2018, when Frederik Andersen of the Toronto Maple Leafs took over for the 10th-place home-ice finish in Herning. Dahm was just named the ICEHL’s MVP after backstopping Klagenfurter AC to its second straight championship. The 34-year-old Copenhagen native provided more reason for optimism on 29 April, as he led the Danes to a 3-2 exhibition win over Sweden, who outshot their opponents 34-8.

Youngsters like the 25-year-old George Sorensen (Aalborg Pirates) and Frederik Dichow (Odense Bulldogs) round out the netminding trio, but this load is Dahm’s to carry. At the 2019 Worlds, he recorded a sparkling 1.95 GAA and 92.7 save percentage, and he’ll see plenty of rubber again.

Malmo has played a big role in recent IIHF history, from hosting the 2014 World Juniors and 2015 Women’s Worlds to sending a wave of Swedish fans across the Oresund to attend the 2018 Worlds in Copenhagen. This year, Denmark’s blue line owes another debt of gratitude to southern Sweden’s biggest city.

Five defencemen on the Danish roster suited up in 2020-21 for the Malmo Redhawks. Who are some noteworthy names?

No Dane played more minutes in Kosice in 2019 than Jesper Jensen Aabo, who averaged 25:32 per game, and is heading into his 11th Worlds in Riga. Markus Lauridsen, who led Danish blueliners in 2019 in points (1+3=4), equalled Jensen Aabo’s 14 points with Malmo this season.

And even though finishing ninth in the SHL after getting swept by Farjestad Karlstad in a best-of-three placement series wasn’t optimal for Malmo, Danish fans hope Matias Lassen keeps showing the unexpected offensive flair he showed with two goals in the final 5-4 overtime loss. Everybody needs to step up.

There are challenges up front, starting on the leadership side. Two-time Worlds captain Peter Regin, who just jumped from Jokerit Helsinki to HC Ambri-Piotta, is out due to injury, and 37-year-old Danish NHL trailblazer Frans Nielsen (Detroit Red Wings) has declined to play after a tough season.

Winger Oliver Bjorkstrand posted career-best numbers with the Columbus Blue Jackets (18+26=44) in this abbreviated NHL season, but unfortunately, the 26-year-old forward won’t be making the trip to Riga. With Nikolaj Ehlers of the Winnipeg Jets and Lars Eller of the Washington Capitals both questing for the Stanley Cup, who will put the puck in the net for the Danes?

At 31, Mikkel Boedker is unlikely to return to the NHL, but as a newly minted assistant captain with Lugano, the swift-skating winger enjoyed a solid Swiss NL season (18+17=35 in 51 games). Boedker tied Eller for Denmark’s points lead in 2019 (1+4=5), and he’s looking for redemption after going pointless in four Swiss playoff games.

Nicklas Jensen led Denmark in scoring (5+2=7) en route to the 2016 quarter-finals, and the 28-year-old Herning-born forward is coming off his fourth straight strong season with Jokerit (18+13=31 in 51 games), so he’ll be expected to chip in as well.

Morten Madsen’s best offensive days are behind him at age 34, but the Timra assistant captain continues to make history as Denmark’s active leader in World Championship games played (90). Madsen, like Norway’s Jonas Holos, will amazingly appear in his 15th Worlds this year, second all-time only to Switzerland’s Andres Ambuhl (active) and Mathias Seger (retired).

Heinz Ehlers, the father of Nikolaj Ehlers, earned an 11th-place finish in his 2019 Worlds debut as head coach. This 55-year-old member of the Danish Hockey Hall of Fame, who coached in Switzerland for many years, needs to make sure his team maintains good structure, with every man trusting his partners. The effort will be there.

Inculcating strong defensive play is key, as only four teams tallied fewer goals than Denmark (18) in 2019. The Danish PK also struggled in Kosice at 73.9 percent. That’s an area where new assistant coach Andreas Lilja – a 45-year-old Swede who played 580 NHL games and won the 2008 Stanley Cup on defence with Detroit – could provide valuable input.

Denmark has avoided relegation since reaching the top division in 2003, and even though there’s no relegation this year, it’s fair to predict Ehlers’ men won’t finish 15th or 16th. Their Group A schedule starts off as a grind, with uphill battles against Sweden (22 May) and Switzerland (23 May) before a should-win date with Great Britain (26 May).

The Danes have never defeated their next opponent, Russia (26 May), in 10 World Championship meetings. So likely, they’ll need to win their last three group games to advance: Belarus (28 May), Slovakia (29 May), and the Czech Republic (31 May). It’s possible, but finishing somewhere between tenth and 13th place is more realistic.