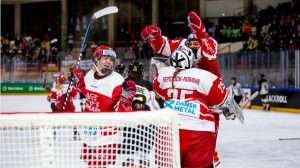 Denmark’s women’s national team will compete in the Olympics for the first time in history.

The ladies in red are bound for Beijing! Securing an all-important point in its last game of the Women’s Final Olympic Qualification Group D, Denmark’s women’s national team will compete in the Olympic Games for the first time in history following a 3-2 shootout loss to Germany.

For Danish women’s hockey, never has a loss felt so good.

“Yeah definitely,” said Danish defender Amalie Andersen. “I was pretty much shaking the whole game but just trying to stay calm, breath and take it one second at a time.”

“It was crazy, everybody was really loud, crying and shouting, I’ve never experienced anything like that before,” said Sofie Skott about the team’s emotions after the clock ran out in the third period, giving Denmark its Olympic spot.

Denmark came into the game needing just a single point to reach the Olympic Games for the first time in history. The Danes so far were unbeaten in two games in Group D after defeating Italy 4-0 and Austria 1-0.

Down 2-1 in the third period, the Danes were fighting to equalize or go home empty-handed. On a 4-on-4, defender Silke Glud shot the puck on net, where it was deflected into the back of the goal by a German player to tie the game at 2-2.

That score would be enough as the Danes held on to force overtime and earn the most important point ever in the history of the Danish women’s program.

“Really admirable,” said head coach Peter ELander about Denmark’s performance. “We started out good but got on our heels in the second period and they got a 2-0 lead. We were resilient and the performance of the team was admirable.”

For Germany, the road to the Games was much more difficult due to the team having dropped its opener against Austria. In order to finish ahead in a tiebreaker, the Germans would either need to win in regulation and get a win from Italy, or defeat the Danes by a six-goal margin in the event of an Austrian victory against the Italians.

But before anything the Germans needed to solve Danish defence and goalie Cassandra Repstock-Romme, who together were riding a 120-minute shutout streak. A scoreless first period played into Danish hands, with shots even at seven apiece although Germany did get a pair of quality chances against Repstock-Romme.

German pressure continued in the second, and finally hit paydirt midway through the period. Tanja Eisenschmid got the puck coming down the high slot area and fired a shot that went past the net to the left of Repstock-Romme. The puck bounced up off the boards behind the net and landed to the stick of captain Julia Zorn who buried it into the back to the net for the 1-0 lead.

Then on a power play, Bernadette Karpff found teammate Lili Welcke at the bottom of the circle with a cross-ice great pass, allowing Welcke to fire it into the top corner on a one-timer.

But with 42 seconds left in the frame, the Danes responded and put a stop to the German momentum. A great individual effort by captain Josefine Jakobsen got the puck into the German zone and eventually to Malene Frandsen, who fired a laser from just inside the blue line past goalie Franzizska Albl. That goal gave the Danes a boost going into the final frame, where they got the second score and held on to force overtime and punch their ticket to their first-ever Olympic Games.

The successful qualification marks a historic double for Denmark’s ice hockey program, which back in August saw its men’s national team also earn an Olympic trip for the first time ever.