Despite Our Utter Indifference, These Boys Will Battle for India in Malaysia 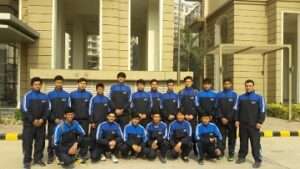 With conversations on sports dominated by cricket, football, hockey or even kabaddi, ice hockey receives scant attention. Unsurprisingly, very few Indians are aware of the thriving ice hockey culture, a Winter Olympic sport, in this country.

You would be interested to know that India will participate in the men’s Under-20 International Ice Hockey Federation (IIHF) Challenge Cup of Asia (CCOA) in Malaysia from December 12 to 17.

In a passionate Facebook post, the Ice Hockey Association of India wrote about how the team made it to Malaysia, despite no dedicated ice rink in India, lack of equipment, institutional support and funds for airfare and accommodation, among other shortcomings.

Speaking to The Better India, Harjinder Singh Jindi, the general secretary of the Ice Hockey Association of India (IHAI), explained the situation. He said that financial support (practice and participation) for national teams across tournaments is dependent on crowdfunding campaigns, the odd donation from corporates, not-for-profit organisations, state governments, parents of participating athletes and well-wishers, besides funds available to the IHAI.

This constant hustle for funds by key stakeholders in the IHAI is symbolic of the inadequate institutional support it receives.

Although the IHAI is recognized by the Ministry of Youth Affairs and Sports (MYAS), the only sort of financial support it received from them was the ₹2 lakh it got for a national championship in the cold climes of Leh. The organization has stopped seeking financial help from the ministry as the amount allocated isn’t nearly enough to even conduct such tournaments.

As for institutional support, Sarbananda Sonwal, former Union Minister for Sports & Youth Affairs, assured Parliament in May 2015 that the ministry will help restart the only international-sized ice rink in Dehradun. The establishment remains shut even today. With a functional international-sized rink, teams representing India need not travel abroad for training, which comes at a significant cost for the IHAI.

“When we trained on an international-sized facility (in Kyrgyzstan earlier this year), both the men and women’s team achieved better results,” says Harjinder. The men’s team finished second in the IIHF CCOA Division 1 tournament in Kuwait, while the women won two international matches for the first time ever, finishing fourth among seven nations. 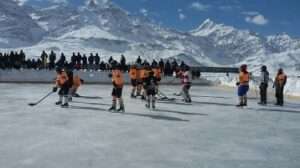 In India, practice facilities are limited to the Ladakh and players practice on natural ice

These natural rinks do not have any dasher boards made of steel or aluminum, which form the fence around an ice rink. Dasher boards are a critical piece of infrastructure which teams use to clear the puck out of their zone or to help execute a pass.

Allied with the fact that regional championships take up most of those two months, the national team gets barely any time to practice. The only solution is training camps abroad. Four years ago, the Jammu and Kashmir government promised to set up international ice-rinks in Leh and Kargil. These projects remain incomplete to date.

“Kyrgyzstan and Malaysia are the two countries, where we can train at an economical cost. The Indian Embassy in Bishkek helped us greatly in 2016 and 2017; negotiating cheaper rink cost, accommodation and food for the men and women teams in Kyrgyzstan. Exemplary dedication and courtesy was extended to us by Indian Embassy in Bishkek, Kyrgyzstan and now the Indian High Commission in Malaysia,” he added.

Before heading out to Malaysia, the Under-20 team practiced at Iskate, a small ice rink in Ambience Mall, Gurgaon, which is barely 1/4th the size of an international rink. The players were only able to hone their basic skills here.

For accommodation, Harjinder found help in his neighbour and friend, Prabhjot Singh, a sports aficionado who runs Jaguar Football Club, a small club side in New Delhi. “He voluntarily stepped in to offer his place in Manesar free of charge for our U-20 boys during their initial training camp in Gurgaon,” Harjinder said.

The gear and equipment for the Under-20 side were bought and delivered by Subrat Mahapatra, who happens to be a parent of one of the boys on the team. He bought all the gear in the United States, where he currently resides, and sent it to the team in India.

To the uninitiated, the squad is composed of 20 players from different corners of the country. It’s a unique blend of individuals from Ladakh, Maharashtra, Odisha and Himachal Pradesh. Boys from the cold climes of Ladakh dominate the composition of the squad with 14 players (13 from Leh and 1 from Kargil), and the rest split among the three states noted above.

Led by captain Tsewang Dorjey, who turns 20 after the tournament on December 29, and under the tutelage of coach Mushtaque Ahmad Giri, a former India player with coaching stints in the United States, the team feels up for the challenge. Competing with the likes of United Arab Emirates, Malaysia, Philippines and Kyrgyzstan, this tournament is modeled on the round robin format. Some of the squad members will miss exams with their respective schools and colleges, but will have the opportunity to write them after the tournament, says Harjinder.

In an earlier article on corporate social responsibility, we had noted that companies could invest more in sports. With state support non-existent, ice hockey in India could really do with an injection of corporate money. It has worked for football, badminton and even kabbadi.

The Indian Under-20 side will play their first match on December 12 against the United Arab Emirates at 1pm (IST). We wish them all the very best.

If you wish to support Ice Hockey in this country, you can donate here.