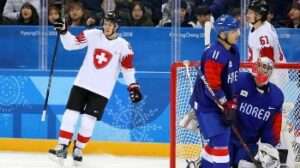 In a season culminating with hosting the 2020 IIHF Ice Hockey World Championships in Zurich and Lausanne, Switzerland got its international season off to a winning start in dramatic fashion. The Alp nation claimed their third win in Deutschland Cup with previous top place finishes arriving in 2001 and 2007.

Heading into the final round of games, Germany clung on to hopes of getting their hands on their first Deutschland Cup title since 2015. In the final game, they first needed Switzerland to slip up against Russia’s second team, before gunning for glory against Slovakia in the final game of the tournament played in Krefeld.

Switzerland’s young team had first convincingly seen off Slovakia 5-2 in their opener as seven newcomers were fielded. Against Germany, they silenced an enthusiastic home crowd of 6,217, when tournament top scorer Pius Suter netted the game-winning 4-3 goal with one second remaining of overtime. Against Russia B, Alessio Bertaggia’s power-play goal with 13:48 left of the third period appeared to put the Swiss back in control, but Ivan Igumnov tied the game at 3-3 with less than three minutes of regular time play. Artyom Galimov then scored the winning penalty shot for last season’s Deutschland Cup winners Russia B, who eventually had to settle for third place.

But all was not yet for the Swiss. Following the game first from the stands and later at the airport, they needed Slovakia to get a point of Germany in their closing game.

Germany´s Andreas Eder scored a brace to put the hosts in front with a two-goal cushion before the home fans watched with disbelief as Slovakia rallied back with Filip Krivosik’s tying the game to push the game into overtime. With any chance of Germany tournament victory now gone, Peter Zuzin piled on the misery scoring for the Slovaks 2:08 into overtime to win 3-2.