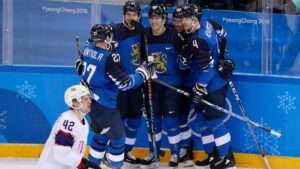 “I like scoring every game,” Tolvanen told reporters, “so that’s a big thing for me. I don’t know, I just go out there and have fun and try to play my game.”

The 18-year-old Tolvanen has three goals and three assists through two games in PyeongChang.

With Finland down 1-0 at 16:36 in the first period, Tolvanen teed off on a one-timing pass from Sami Lepisto, a former NHL player, to beat Norwegian goalie Lars Haugen for the power-play equalizer.

Then, at 5:32 of the second period, Tolvanen found himself on a break on Haugen and beat the Norwegian goaltender with a forehand-to-backhand deke, slipping it through Haugen’s five-hole.

Tolvanen’s second marker was the game-winner. He scored twice on six shots on goal and was a threat to score every time he had the puck.

“It’s amazing. It’s a pleasure,” Finland captain Lasse Kukkonen said. “It’s a privilege to be on the same team with him and I get a chance to enjoy watching him play.

“Everybody can see he’s enjoying the hockey. He’s playing the hockey that everybody wants to play, having fun and doing the things he loves out there.”

While the Predators will be keeping a close eye on Tolvanen’s performance in PyeongChang, Jokerit, too, has high stakes on how the 5-foot-10 winger performs.

So far, so good as Tolvanen is emerging as the early star of the Olympics.

“Eeli is a great player with an unbelievable shot,” Finland head coach Lauri Marjamaki said. “He brings us so much, his open-minded game and fearless (approach). And the whole atmosphere is excited because Eeli is on our team.”

A disallowed goal in the second period from Norway shifted the momentum fully into Finland’s favor. Factor in the 12 penalty minutes by the Norwegians, plus the two power-play goals from Finland, and it’s a losing formula.

“I don’t think it did but it looks like it did,” Norway defenseman Jonas Holos said of the disallowed goal. “After that, Finland took over the game completely.

Norway winger Patrick Thoresen, formerly of the Philadelphia Flyers and Edmonton Oilers, opened the scoring in the first period, depositing a loose puck past Finland goalie Mikko Koskinen on the power play.

Thoresen’s goal was Norway’s lone against Koskinen, who made 21 saves in the win.

Lepisto’s goal was his second of these Olympics.

“We played well the first two periods,” Haugen said, “but the lack of discipline was tough, especially against this team. It was frustrating. We were not disciplined enough.

“But the referee is the same for both teams and I guess, the other teams are managing to understand how he calls the games.”

Finland returns to action Sunday against Germany at 7:10 a.m.