End of an era for France 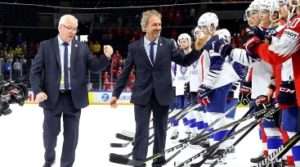 It’s been a long journey. In 1975, when Dave Henderson first arrived in Amiens and started playing for the local Gothiques, the club history recalls ‘a little Canadian who barely spoke a word of French’. In 2018, after taking charge of the national team for the 346th time, Henderson retired from his position of head coach.

In the 14 years that Henderson and his assistant Pierre Pousse have led Les Bleus, the country has made enormous progress. They masterminded a return to the top division for the 2008 World Championship and the country has stayed there ever since. Eleven consecutive seasons of top-flight action have brought memorable victories against some of the biggest teams in the game. In tandem, the French Ice Hockey Federation has boosted the country’s sporting infrastructure. At all levels of the game, French national teams are making progress, and last year saw Paris co-host the World Championship as the main event returned to France for the first time in the modern era.

“It’s been a fun ride, most of it,” Henderson acknowledged after running down the final curtain on his time in charge of the team.

Among the many highlights, Pousse unhesitatingly picks out the 2008 World Championship in Quebec City. “We had three years in the B pool, including that difficult World Championship [Division I] in Amiens; we went to China, to the end of the world, where there was only one journalist, and won promotion,” he said. “Then we went to Quebec and it was such an eye-opener. Very few of the players had experienced anything like it, and we certainly hadn’t.”

Hockey in France was very different back then. Most of the national team was drawn from the domestic league, whereas the majority of players in Copenhagen are playing abroad, gaining greater experience. The local competition is also much improved.

“French hockey has come from being like kitchen hockey, I guess you’d call it, to something much more professional. We have more preparation, more games, more intensity and more organisation. It’s going in the right direction and it will keep going that way under the direction of our Federation.”

Pousse, who played under Henderson in Amiens before working with him as a coach with the French Juniors and then the national team, is expected to keep working on the French hockey program. For Henderson, there’s a slight pause – but no plans to stop working altogether.

“I’ll find something to do,” he said. “I’d drive my wife nuts if I didn’t do something.

“I’m in touch with the Federation and I’ll just play it by ear for now. In the next couple of months everything will be decided.”

For all the emotion of the final game – and a guard of honour as the French and Swiss teams applauded Henderson and Pousse off the ice – the 66-year-old is confident that this is the right step for the team.

“I think it was a global decision,” he said. “After 14 years I’d gone past retirement age and I think the team needs a change. The decision was made and I think it’s going to be a good decision.”

For Henderson and Pousse, who have worked in tandem since the 1990s, it’s going to be a big change. And for their players, the arrival of the legendary Philippe Bozon, the first French-trained player to reach the NHL, is something new.

“Personally, I was [Henderson’s] player for nine years, and now it’s the end,” said Damien Fleury, who wore the ‘C’ as Henderson took charge of his final game. “It’s tough, but it’s hockey. I just wish them the best, and thanks for everything they did for us.

“As for Bozon, I don’t know. I know him, but I’ve never had him as a coach. I know it’s going to be tough. I know we’re going to work hard. Maybe this is what we’ll need to go to the quarter-final.”