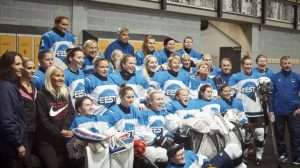 The Estonian women’s national team at its first camp after a 10-year break.

This season the Estonian women’s national team was scheduled to stage its comeback in the IIHF Ice Hockey Women’s World Championship program.

Unfortunately, the Covid-19 pandemic scratched these plans with most international ice hockey tournaments from the IIHF and its member nations cancelled. However, the hopes of the Estonians are still alive to make women’s ice hockey bigger in the country.

The Estonian women’s national team played internationally in 2007 and 2008 but then disappeared when women’s ice hockey was in a decline after the financial crisis and most teams in the country disappeared.

Things changed in 2016 when the Estonians joined the educational program at an IIHF Women’s High-Performance Camp and organized the country’s first World Girls’ Ice Hockey Weekend with many new players but also some who were national team players many years earlier.

In the meantime, Estonia has again a women’s ice hockey championship and will this year also have a team that will compete against Latvian and Lithuanian club teams as the three countries join forces with a Baltic League.

With a growing program and a national championship in place, the Estonians were ready for their international comeback and had the first national team camp in August. The women’s national team would have played in the lowest tier of the IIHF Ice Hockey Women’s World Championship, not far from home in Kaunas against host Lithuania, Ukraine, Belgium, Romania, Bulgaria, Hong Kong and Bosnia & Herzegovina.

While their comeback in an official IIHF tournament will have to wait a bit longer than expected due to the pandemic, the team continues to work on its comeback and on a documentary “On Silver Heels” about the story of the national team’s comeback.

With the aim to make the team and women’s sport more visible in Estonia, the team started a crowdfunding campaign where they hope to generate as a first step €18,000 for both the documentary and the team’s games against Latvian and Lithuanian teams. Click here to find out more and be part of the crowdfunding campaign.