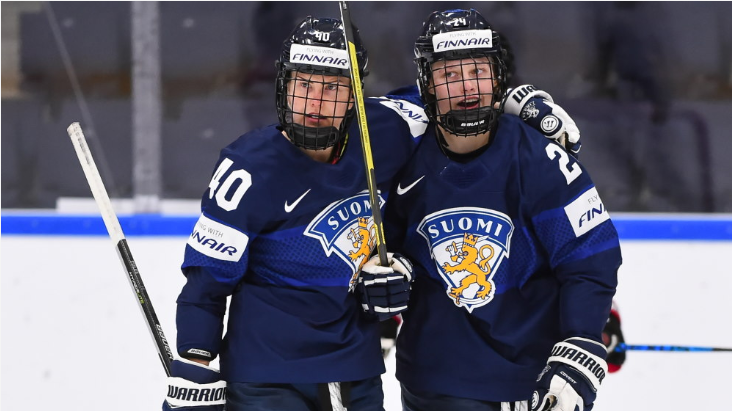 Viivi Vainikka and Noora Tulus led the tournament in Finland in scoring.

With the 2022 IIHF Ice Hockey Women’s World Championship season behind them and the 2023 tournaments on the horizon, women’s national team programs are preparing for the new international season with tournaments and exhibition games against other nations.

Nine countries competing in the Top Division and Division I Group A were the first to do so this fall, with Finland finishing first in the Five Nations Tournament on home ice in Vierumaki and Hungary finishing first in the Four Nations Tournament in Vaujany, France. While most nations were missing a number of key players due to other commitments (such as the NCAA season), these tournaments provided others with an opportunity to make a case for their inclusion on the national team next spring.

Four wins and only two goals against led Finland to first place in their first competition since their sixth-place performance at the 2022 IIHF Ice Hockey Women’s World Championships. Played from 8 to 12 November, the Finns collected two 4-0 shutouts over Switzerland and Germany and two 3-1 victories over Sweden and Czechia. Noora Tulus and Viivi Vainikka led the tournament in scoring, Tulus with one goal and six assists, and Vainikka with five goals. Defender Rosa Lindstedt also stood out with five assists.

While they lost to Finland and Czechia, the Swedes – led by Anna Kjellbin wearing the C – also collected two significant shutout wins. Fanny Rask scored a hat trick in a 7-0 win over Germany to open the tournament, while Felizia Wikner Zienkiewicz collected two goals in a 5-0 win over Switzerland to close out the tournament.

Perhaps the closest game of the tournament was the match-up between Czechia and Switzerland, who last met in the bronze medal game at the 2022 Women’s Worlds, which Czechia won 4-2. While Czechia took a 2-0 lead in Vierumaki, Switzerland tied the game early in the third period. However, it was the Czechs who skated away with the win, with Agata Sarnovska potting the game winner.

It was a tough tournament for Germany, who iced a young team and were shut out in their three games played (the Germany-Czechia game was cancelled due to a power outage). Two teenage goalies shared duties for Germany, 19-year-old Lilly Uhrmann and 18-year-old Felicity Luby.

Hungary followed up their eighth-place finish at the 2022 Women’s Worlds – a historic best-ever performance – with first place in the Four Nations Tournament, which took place 10-12 November. They were followed by Slovakia in second, France in third, and Norway in fourth.

Hungary and France gave a sneak peek into the 2023 Worlds, which will see France return to the Top Division for just the second time. Imola Horvath was the hero of their match-up, scoring a late goal to give the Hungarians a 1-0 win.

Norway, which will compete in the Division I Group A in April along with Slovakia, was the only team able to beat Hungary, which they did by a score of 3-2 with contributions from rising stars Silje Gundersen and Lotte Pedersen and veteran Andrea Dalen.

The host nation’s Clara Rozier, who is on her way to a standout season in Finland’s Naisten Liiga with 14 goals and 13 assists in 17 games, led the tournament in goals scored with three, one to open scoring in a 3-2 win over Norway and two in a 4-3 overtime loss to Slovakia. While France tried to settle into a 3-1 lead, Slovakia made a comeback, tying the game with two goals in the final 10 minutes and securing the win with an overtime winner from Livia Kubekova.