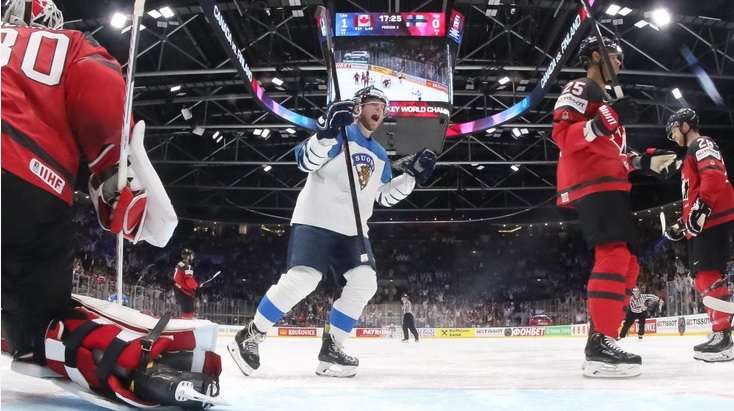 Finland’s 2021 IIHF World Championship roster features a whopping 14 rookies. For some countries, that amount of inexperience would spell doom. Yet for the defending champions under head coach Jukka Jalonen, this is not necessarily a problem.

The Finns, who have won this tournament three times (1995, 2011, 2019), famously tend to overachieve when they don’t bring a roster laden with NHL talent. In 2019 in Slovakia, their commitment to team defence, coupled with a marvellous transition game, yielded three monster playoff upsets over stacked opponents, even they only had two active NHLers in forward Juho Lammikko and defenceman Henri Jokiharju. Finland topped Sweden 5-4 in overtime in the quarter-final, Russia 1-0 in the semi-final, and Canada 3-1 in the final.

After an extended two-year wait due to the global pandemic, the road to gold begins anew for the Finns in Group B in Riga. In 2006, the previous time the tournament took place in the Latvian capital, Suomi earned the bronze medal by beating Canada 5-0. Let’s take a closer look at the weapons Jalonen has in his 2021 arsenal – including eight returnees from Slovakia.

In 2019, a 25-year-old Kevin Lankinen – fresh off paying his dues as an AHL rookie with the Rockford IceHogs – outplayed Henrik Lundqvist, Andrei Vasilevski, and Matt Murray in the medal round. That sets the bar high for the two experienced KHL netminders vying for crease time in 2021.

Harri Sateri has the edge in terms of experience. The 31-year-old former San Jose Sharks prospect was Finland’s starter in both 2017 and 2018, totalling an impressive 1.85 GAA and 92.6 win percentage in 11 World Championship games. However, Sateri also came home emptyhanded both times. This season, the Sibir Novosibirsk starter amassed a 2.27 GAA and 92.2 save percentage in 47 games, but that didn’t stop his club from missing the KHL playoffs for the fourth time in five years.

If Jalonen wants to ride the hot hand, Juho Olkinuora, 30, may be his best bet. In 2019, the 190-cm, 91-kg Olkinuora made 12 saves for a 5-0 shutout versus Great Britain in his lone Worlds appearance, but you can’t read too much into that. More importantly, the 2018 CHL champion with JYP put up some of the KHL’s best regular-season numbers this season with Metallurg Magnitogorsk (1.90 GAA, 93.5 save percentage). Olkinuora led his team into the second round of the playoffs before falling to eventual champion Avangard Omsk in a six-game series.

Should third goalie Janne Juvonen (Leksands IF) get to play, it’ll be the 26-year-old’s first IIHF game since an 8-0 relegation-round win over Germany at the 2013 World Juniors.

Olli Maatta, a two-time Stanley Cup champion with the Pittsburgh Penguins (2016, 2017), is hoping to recapture some of that winning feeling. The 26-year-old defenceman had a difficult season with the Los Angeles Kings. Maatta hit a career-low in average time on ice (16:38) on the third pairing and missed nine games after suffering an upper-body injury against Vegas on 21 March. Nonetheless, this Jyvaskyla native knows all about performing in big games.

Oliwer Kaski and Ville Pokka bring plenty of good vibes after helping Avangard Omsk take its first KHL title ever in April. Kaski, who spent 2019-20 with Detroit and Carolina’s AHL affiliates, is well-known for his hard shot, but the biggest of his 10 playoff points came when he fed Sergei Tolchinski for the 1-0 winner versus CSKA Moscow in Game Six of the final. Another freshly minted champion is 30-year-old veteran Miika Koivisto, who helped Vaxjo Lakers capture their third SHL title. Koivisto joins Kaski, Atte Ohtamaa (Lokomotiv Yaroslavl), and Petteri Lindbohm (ECH Biel) among 2019 blueline returnees.

Overall, don’t expect a ton of scoring from this group, but Jalonen should spread the minutes out smartly to maximize its potential.

Despite the unavailability of most Finnish NHL forwards and the top Salavat Yulaev Ufa trio of Teemu Hartikainen, Markus Granlund, and Sakari Manninen, the Finns will likely find ways to score by putting lots of pucks on net.

Among the nine newcomers at forward, the most eagerly anticipated debut surely belongs to Anton Lundell. The 2020 first-round pick of the Florida Panthers captained Finland to bronze at this year’s World Juniors in Edmonton with 10 points (6+4=10) in seven games. Lundell, a heady 19-year-old centre who also owns a 2019 World Junior gold medal and wore an “A” with HIFK, could be an impact player under Jalonen, whether or not he contributes offensively the way, say, an 18-year-old Sebastian Aho did in his 2016 Worlds debut (3+4=7 in 10 games).

Notching six points (1+5=6) in 17 games with the Buffalo Sabres, 23-year-old NHL rookie Arttu Ruotsalainen made a positive impression amid tough circumstances with the last-place club. The Oulu-born forward, who also racked up 27 points in just 19 games with Ilves this year, will look to fit in with a solid two-way game in his first Worlds. And winger Jere Karjalainen (HK Sochi), making his Worlds debut at age 28, led the Finns with four points at the just-concluded Czech Hockey Games. Shining in Riga would be a nice bonus for Karjalainen, since he’ll join Dinamo Riga in 2021-22.

Meanwhile, Petri Kontiola’s return to the Worlds after a six-year absence will be keenly scrutinized. The playmaking centre owns two Worlds silver medals (2007, 2014) and an Olympic bronze medal (2014) and last faced IIHF competition at the 2018 Olympics. The 36-year-old Kontiola led Liiga with 55 points (14+41=55) for HPK this season, and 29 of those points came on the power play, which is encouraging. Still, it’s hard to expect Kontiola to live up to his 2013 peak when he led the Worlds in scoring (8+8=16).

But never mind that: what can Marko “Morko” Anttila possibly do for an encore after his 2019 playoff run? Scoring the late equalizer against Sweden and the winners against Russia and Canada is an act that’ll be tough to follow for the 203-cm, 104-kg folk hero, who captained Jokerit this year. All we can say for sure is that anything is possible.

Over the last 10 years, Jukka Jalonen’s two gold medals (2011, 2019) as a head coach have only been matched by Sweden’s Rikard Gronborg (2017, 2018). The 58-year-old, whose resume also includes 2016 World Junior gold and KHL stints with SKA St. Petersburg and Jokerit, has long been touted as a potential NHL coaching candidate, and winning another championship could springboard him across the Atlantic.

After 2019’s triumph, Jalonen told The Coaches Site that creating a positive atmosphere where the players feel respected is essential for team spirit. That’s certainly reflected in the on-ice compete level of his teams. Karpat head coach Mikko Manner returns for the fourth straight time as a Worlds assistant coach, while Assat’s Ari-Pekka Selin, who served as Kazakhstan’s bench boss at his last Worlds in 2014, is a new assistant for Jalonen.

With recent success not just at the Olympics and Worlds, but also at the U18 and U20 levels, the Finns now expect to medal – if not win – at every tournament. Despite a lack of big names, they could certainly top Group B, especially if Canada and the U.S. struggle to come together.

Both goaltending and defence should be solid, so medal round success will likely hinge on Finland’s ability to generate sufficient and timely scoring. Sometimes that’s a problem. Veterans like Anttila and Koivisto were there in 2018 when the Finns fell 1-0 to Canada in the Olympic quarter-final and 3-2 to Switzerland in the World Championship quarter-final. However, if they can avoid those kinds of pitfalls, repeating as champions isn’t out of the question.