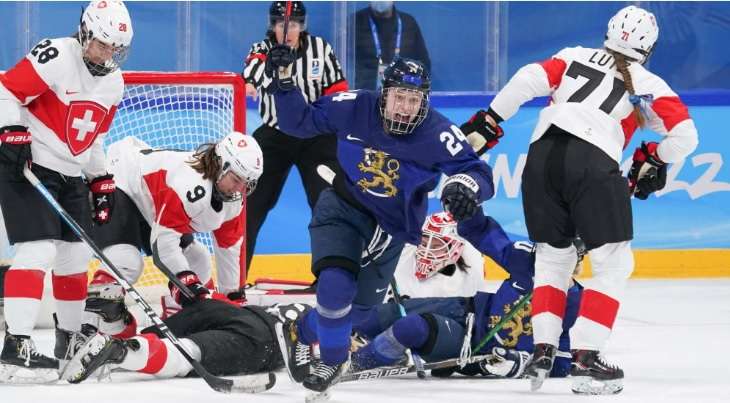 Finland defeated Switzerland, 4-0, tonight at Wukesong Sports Centre to win its fourth Olympic bronze medal. They scored at even strength, short-handed, and two on the power play, and were masterful at shutting down the top Swiss trio all game long.

“The first period wasn’t the best we had, but we talked about that in the first intermission and the second period was our best in a long time,” said Finland coach Juuso Toivola. “The players were so ready, so eager to get the bronze medal. That made it easy for me to coach the team. I’m honoured to be the head coach of that team. It’s a great privilege.”

Indeed, the Finns won in a manner similar to Canada’s men at last year’s World Championship–taking a medal after losing the first three games of the tournament. Just as special, coach Juuso Toivala arrived in Beijing as an assistant coach but had to take over after Pasi Mustonen was forced home to deal with a family emergency. Toivola coached the 2011 Finnish U18 women’s team to bronze and now joins a small group of coaches to win women’s medals at two events.

“It was a shock for everybody,” Toivola said of the last-minute change. Everything happened so fast. We talked openly about that. We talked a lot and I think it helped. We faced the fact that it’s the situation.”

“It was a tough game, but we got a really good job,” added Finnish forward Viivi Vainikka. “We just wanted to play a simple game in the last period. Just not make any mistakes and just play simple. I think that was the key for us for today.”

It was the first ever meeting between the teams for bronze, although previously the Finns had finished third three times (1998, 2010, 2018) and Switzerland once (2014).

For Finland, the win means Jenni Hiirikoski and Michelle Karvinen are now the most decorated European women at the Olympics in hockey, both having won three medals.

“I think we had a really good plan for this game and we stuck to it,” captain Hiirikoski said. “We struggled with scoring last time, so now we found ways to score a little more and also to defend better. That has always been our strong side, so we came back to that.”

Anni Keisala stopped only 15 shots for the shutout while Andrea Braendli was sensational in the Swiss net, facing  47 shots.

“It didn’t work out as well as we had hoped, but we battled hard,” Braendli said. “We worked together as a team really well. We had a tough loss at the start and then we battled back with two wins against Finland and one in the quarter-finals. It’s heartbreaking, but I think we’ll learn from this.”

“It’s hard right now,” said Alina Muller, who finished the tournament as the highest-scoring European player with 10 points. “It’s disappointing. I think we had a really good chance to win the medal. We had a young team. They were just battling. They were going hard, I’m really proud of them. In the end, we can be proud of how far we have came here but right now it’s just really hard. In the end today, our line needed to produce a little more. The Finns did a really good job, getting the loose pucks and always dumped and forechecked. We did a good job. Braendli kept us in the game. With her we have a chance to win every game, but in the end the Finns were better.”

While the Finns rolled over four lines and produced a balanced attack, the Swiss had only one line to rely on–Alina Muller-Lara Stalder-Phoebe Stanz. In fact, that line accounted for 10 of the team’s 13 goals in Beijing, and coach Colin Muller played Alina Muller and Stalder as much as he could. It just wasn’t enough, and the Finns were letter perfect inside their own blue line.

It was clear from the outset this would be a closely-fought game, and in the early going the Swiss looked to be the better of the teams. They had more of the puck and territory, but they also couldn’t generate a clear scoring chance. When they got the first power play thanks to a Tanja Niskanen interference penalty on goalie Braendli, they did little, and Finland’s PK did a masterful job.

The game’s first goal came off the rush on a play that hardly looked dangerous. Elisa Holopainen carried the puck into the Swiss end and set up Noora Tulus for a shot. Braendli made the save but went down with a defender, and Viivi Vainikka knocked in the loose puck at 11:36.

The Finns then had a power play of their own which proved ineffective, but Switzerland couldn’t penetrate the Finnish end. Suomi took control of the game in the second, and it was only the superb goaltending of Braendli that kept this a one-goal game. Early on she stopped a Sanni Rantala point shot and then stoned Nelli Laitinen on the rebound. She made great saves on Holopainen and Vainikka, and when Sanni Hakala tried to jam the puck in, Braendli stood her ground. Vainikka and Laitinen then worked a two-on-one beautifully, but again the goalie was there to stop the Laitinen shot.

All the while the Swiss couldn’t muster any offence. Colin Muller double-shifted Muller and Stalder, giving them different linemates, but they couldn’t get near Keisala’s net. And then in a flash, the Swiss had their best chance of the game. The puck bounced over the stick of Minnamari Tuominen at the Switzerland blue line, and Lena-Marie Lutz skated the length of the ice on a clear break. She didn’t get her shot high enough, though, and Keisala got her glove out to make the critical save.

Shots through two periods favoured Finland by a whopping 34-9 margin, but it was still just a 1-0 game. Early in the third, however, they doubled their lead with a key short-handed goal. A penalty for too many skaters against the Finns gave the Siwss just the chance they needed to get back in the game, but it was Finland that scored.

Sinja Leeman lost the puck at the Finland blue line and Susanna Tapani took the puck up ice on a two-on-one with Petra Nieminen, only Nicole Vallario back. When Vallario slid to take away the pass across, Tapani wired a shot over Braendli’s shoulder at 3:24, her sixth goal of the Olympics. That was the dagger to the Swiss heart.

Eight years ago, the Swiss overcame a two-goal deficit in the third against Sweden to win bronze. Not so this year. Laitinen added a third goal at 14:24 on a power play, her big blast beating Braendli over the glove and putting the game out of reach.

“It was a big relief for me,” Laitinen said of her nice shot. “I had a lot of chances today, and luckily that one went in.”

Michelle Karvinen closed out the scoring with another power-play goal with only 56.6 seconds remaining.

“The Finns did a good job taking us out of the game,” Stalder said. “It didn’t work out for us offensively. They eliminated us. I wanted to show my best hockey today and I couldn’t perform it. But in such an important game you need it, and it’s not acceptable. In the end, they were smart; they were physical. They got under our skin. It was the small details that decided it. We had that breakway. If it had gone in, it would have been 1-1 and it could have changed the momentum. Over 60 minutes they deserved to win.”