Finns march on to semi-final 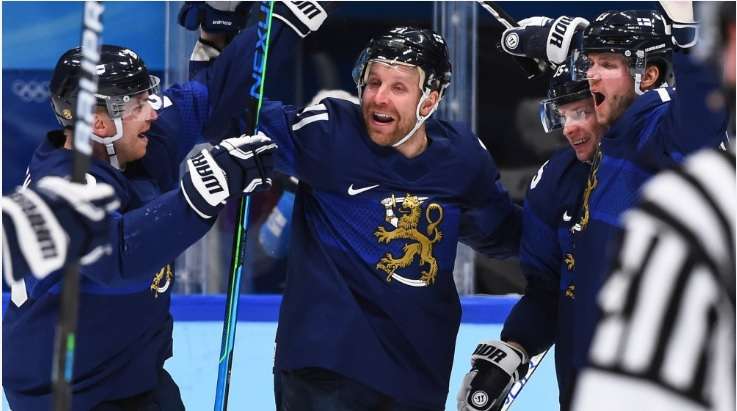 Finland’s Miro Aaltonen (#15) celebrates after opening the scoring in the quarter-final game against Switzerland.

Clinical finishing and traditional resilience saw Finland advance to the semi-finals with a 5-1 victory over Switzerland. Three goals from 12 shots saw Jukka Jalonen’s men into a 3-0 lead early in the second period and that proved sufficient to sink Switzerland and set up a meeting with Slovakia in the final four.

Finland went with the same skaters that defeated Sweden in an overtime thriller in the final game in Group C, with Jalonen bringing back goaltender Harri Sateri in place of Jussi Olkinuora. Switzerland, who played yesterday in the qualification round against Czechia, started with Reto Berra in goal today and returned forward Dario Simion to the team in place of Joel Vermin.

After an even opening, the Finns assumed control with a pair of quick goals midway through the first period. Miro Aaltonen, one of many KHL-based players on this team, got the first when he gobbled up the rebound after Berra padded away Niklas Friman’s shot. Two minutes later, defenceman Mikko Lehtonen doubled the lead and gave Switzerland a big headache.

Down 0-2 to a Finnish team renowned for its defensive discipline is always a tough place to be. And Switzerland’s problems were exacerbated by a misfiring offence. Throughout the tournament, goals have been a problem for the Swiss, who managed just three markers in three group stage games.

And things didn’t get any better for Patrick Fischer’s team at the start of the second period, when Hannes Bjorninen’s interception in centre ice left Michael Fora trying to defend a two-on-one break. Bjorninen had the perfect feed for Marko Anttila to shoot home number three.

That was the end of Berra’s game, with the Swiss bench eager to shake up a game that was rapidly getting out of reach. Leonardo Genoni took over, and immediately found himself busy. Finland generated a flurry of chances with Leo Komarov causing trouble on the doorstep and Aaltonen flashing in a dangerous shot in the second phase of play.

Once in front, the Finns tend to cling, limpet-like, to their advantage and the second period of this game was no different. As always, Jalonen’s team was drilled and disciplined, squeezing the life out of Switzerland’s offence and offering few scoring chances.

However, Lehtonen shot the puck over the plexi for a cheap delaying the game penalty late in the middle frame, and that offered the Swiss a chance. It was a lifeline eagerly grasped, with veteran Andres Ambuhl pulling a goal back off Enzo Corvi’s feed to give his country hope going into the third period.

Ambuhl’s second goal in two days gave Switzerland hope and Fischer’s team made a fast start in the third period. In the opening minute of play, Gregory Hofmann was buzzing around in front of Sateri’s net, asking a couple of questions of the Finnish goalie. And the Sibir Novosibirsk netminder was beaten soon afterwards, but Denis Malgin’s shot dinged off the piping and bounced safely back into play.

The momentum was building in Switzerland’s favour, but 49th-minute tripping call on Denis Hollenstein allowed Finland to regroup and take some of the sting out of the game.

As the action ended its closing moments, Switzerland then had a power play chance of its own. That proved decisive – but not in the manner Fischer & Co had hoped. Genoni went to the bench to produce a 6-on-4 power play, but the two-man advantage could not fashion a good chance and when Harri Pesonen returned to the ice, he helped to set up Iiro Pakarinen for an empty net goal that killed Switzerland’s chances.

Adding insult to injury, Teemu Hartikainen added a second empty-netter on 56:47 to put a favourable gloss on the final scoreline.