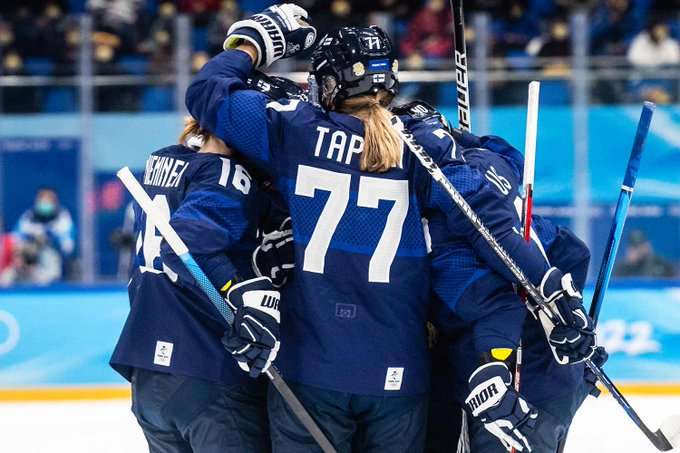 Finland scored twice in the first period en route to an impressive 5-0 win over ROC tonight at the National Indoor Stadium. The game was the last for both teams in the preliminary round of Group A, and with the win Finland finishes in third place in the group. Suomi will now face Japan in the quarter-finals on Friday.

Finland is a perfect 5-0 against ROC/OAR/Russia in Olympics women’s hockey history.

The win was the first of these Olympics for Finland and came after more ROC drama before the puck drop. ROC’s leading scorer, Polina Bolgareva, received a positive covid test and went to isolation instead of the arena with her teammates. She had three of the team’s six goals, and joined three other teammates in the press box, as it were, leaving coach Yevgeni Bobariko with only 18 skaters for the game. The Finns took the necessary precaution of playing with their N95 masks.

Both teams had good scoring chances early, but it was Finland that struck first. Elisa Holopainen walked in alone and fired a shot fof the post, and Polina Luchnikova took a beautiful stretch pass from captain Anna Shokhina but fired her shot right into the logo of Anni Keisala.

On the opening goal, Tanja Niskanen drove down the left side and fed Sanni Rantala with a nice pass in the slot, and Rantala made no mistake with her shot, firing it under the glove of Maria Sorokina at 9:06.

Late in the period the Finns earned the game’s first power play thanks to a flash of blazing speed by Michelle Karvinen. She took a pass at the ROC blue line and tore in on goal, only to be tripped up by Angelina Goncharenko. Soon after, a scrum in front of the ROC goal produced offsetting minors, and Finland doubled their lead on the ensuing four-on-three.

Jenni Hiirikoski set up Petra Nieminen in the slot, but Nieminen fanned on her shot. The puck dribbled to Karvinen on the doorstep, and she lifted the puck in at 18:17 to make it a 2-0 game.

Finland blew the game open in the second with the power play. Sorokina made two great stops early, denying Petra Nieminen and Karvinen from in close, but ay 7:09 the Finns increased their lead to 3-0. Sanni Vanhanen drove through the slot with the puck and dished to her left to Jenniina Nylund. Her shot went off the stick of Sorokina and between her pads.

Three and a half minutes later, they made it 4-0 on a power play. Minnamari Tuominen’s point shot was gloved by ROC defender Yelena Provorova and landed in behind Sorokina. The goal went to a lengthy video review to see if a high stick made contact, but the goal on the ice stood. Oddly, Bobariko then issued a coach’s challenge, which didn’t change the call, and his team was short-handed once again. While this was going on, he also changed goalies, pulling Sorokina in favour of Valeria Merkusheva, who was seeing her first action in Beijing.

Finland pounced on the ensuing power play. Hiirikoski’s point shot was tipped in front by Tapani and found the back of the net at 11:06, the first shot Merkusheva faced. Just like that it was a 5-0 game that was now out of reach.