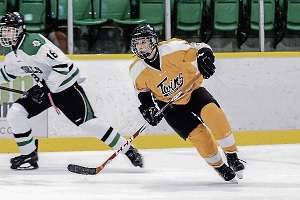 An injection of Canadian talent direct from Fort Garry will boost the Chilean national ice hockey team’s bench this fall in the Amerigol LatAm Cup.

Nicholas Opazo-Ceicko, 19, will suit up for Team Chile as the newly minted squad takes on teams from seven neighbouring South American and Caribbean countries at the Florida Panthers IceDen, Sept. 6 to 8.

“I just feel like I’m lucky to be in this position,” Opazo-Ceicko said. “I never thought I would be playing for any national team, so I’m just lucky to be a part of one.”

The second annual tournament is organized by the Amerigol Miami International Hockey Association which promotes ice hockey in Latin America through tournaments and showcases, with a goal of developing future players and expanding the market for the game in those countries.

In its first year, the tournament hosted teams from Argentina, Brazil, Colombia, Mexico and Venezuela, with Colombia ultimately securing the championship title.

Opazo-Ceicko, who is a dual Canadian-Chilean citizen, reached out to the Chilean team in late 2018. He sent videos of his time as a defenceman with the AA Winnipeg Twins to team captain Cristobal Vega and manager Monica Arias, and after some email exchanges and providing proof of Chilean citizenship (his mother is of Chilean descent), was invited to join the team at the LatAm Cup.

“Growing up, I was always proud to say I am half-Chilean,” he said. “To be able to play for a team that’s newer to hockey, and if even one or two kids who live in Chile watch the tournament and get interested, and they start to develop their skills, and hopefully become better than me, then they can start playing for the national team.

“I’m taking this opportunity to show Chile hockey, and I think that’s the same for everyone else on the team.”

Chile has been a member of the International Ice Hockey Federation since 2000 and won its first game in 2017 against Brazil in the Pan-American Ice Hockey Tournament. The national team, which has previously focused its attention on inline hockey and has just two indoor ice facilities at its disposal (according to the IIHF), is now looking beyond its borders for players, a strategy similarly employed by Colombia in its LatAm Cup debut.

Opazo-Ceicko, who has been skating since he was a toddler, played hockey out of the Fort Garry Community Centre, and with the Twins until 2018, hopes to contribute to the team as best he can and expects to be a strong presence on the blueline.

“I’m bringing some Canadian grit,” Opazo-Ceicko said, adding he and a few other imported players are coming with experience in the physical aspects of the game. “They are taking a chance on me so whatever (ice time) I get I will be happy with, and I will be proud to do it.

“I think this tournament is more to get an idea of how we work together and if it’s a team they’d like to keep together for a while,” he added. “This will be a learning experience for the team.”