France Prepares to Stake Its Place in World Hockey 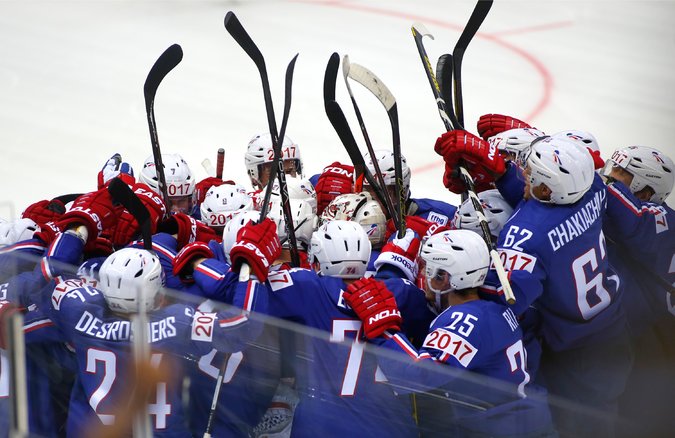 Philadelphia Flyers forward Pierre-Edouard Bellemare rarely gets more than a few days each summer to return to his native France. He typically spends his off-season in Sweden, where he developed his game as a pro before becoming an unlikely N.H.L. rookie in 2014 at 29. Having recently bought a house in Philadelphia after three seasons with the Flyers, he expects opportunities to visit family in France will become even more scarce.

Fortunately, he has been afforded a three-week business trip back home. Paris is the co-host, with Cologne, Germany, of the World Ice Hockey Championship, which begins Friday.

It is an opportunity for Bellemare and his national team colleagues to play in front of friends and family while developing their sport in an emerging hockey nation.

“My mom and some of my sisters have been to the world championships in different countries, but not in France,” said Bellemare, who was born in Paris. “Nobody has ever seen me play an important game in France.

One of the few French players to have earned an N.H.L. roster spot, Bellemare leads a group that is admittedly exhilarated to serve as a host nation at the worlds for the first time since 1951. But the French team, which has been at the top level of international hockey for less than a decade, is also hoping not to wilt under the pressure.

For much of hockey’s history, France has been a nonentity. But it earned a measure of legitimacy in 2007 when it defeated nations like Estonia, Poland and the Netherlands at the Division I, Group A world championships to earn a promotion to the International Ice Hockey Federation’s top division. France then lost, 9-0, to Sweden at the world championships the following year in one of the more humbling defeats in the country’s nascent hockey history.

But the French team avoided relegation year after year and eventually did the unthinkable. First, France defeated Russia, 2-1, in 2013. The next year France advanced to the playoff round after opening the tournament with a shocking 3-2 shootout victory against Canada.

“We had to build the confidence with some positive results,” said Dave Henderson, who has coached the French national team since 2005.

“Because you’re playing against better competition, your players have to play better and they have to progress. That’s what they did,” he added. “That’s what’s happening in France, not only with the senior national team but with the under-20 program and under-17 program and all through French hockey. It was sort of like a leisure thing when I first got here in 1975.”

Now 65, the Canadian-born Henderson never imagined any of this when he first came to France during a college sabbatical. Without a word of French, he went to visit the grave site of his grandfather, who died during World War I near the city of Amiens. Henderson ended up playing hockey in the city before taking on the job of grooming the country into a legitimate hockey nation.

That task could be greatly aided by the team’s overcoming the requisite hosting pressures to compete in a group that includes the powerhouses Canada and Finland, who won gold and silver in last year’s tournament in Russia.

“We have one of the toughest groups ever since we’ve been in the world championships,” Bellemare said. “So I think guys are trying to keep it down, keep it cool, because we know it’s going to be a tough one. It’s a great opportunity.

Since its national team became a mainstay in the I.I.H.F.’s top division, French hockey has shown signs of development. Arenas continue to be built throughout the country and the French Cup, the national tournament featuring the country’s top pro teams, draws about 15,000 fans to its final.

What’s more, France could soon see one of its own taken in the N.H.L. draft. Eligible for the 2017 draft in June, Alexandre Texier is ranked 16th among European skaters after starring in his first season with the pro team in Grenoble.

There may be no greater testament to France’s growth as a hockey nation than its national team roster, which now includes a few current and former N.H.L. players. Along with Bellemare, Dallas Stars forward Antoine Roussel is expected to be a key piece for the team, which will be led onto the ice by the 41-year-old goaltender Cristobal Huet, a veteran of 289 N.H.L. games Huet was the first French player to hoist the Stanley Cup when he won it in 2010 as a member of the Chicago Blackhawks.

The defense will be anchored by Yohann Auvitu, who, like Bellemare, navigated European leagues for years before making his N.H.L. debut this season at 27 with the Devils.

A decade’s worth of hard work has placed France at the center of the hockey world. Now comes the real challenge: performing in front of a home crowd for the first time in 66 years.

“We usually play in other countries, which is nice,” Henderson said. “But this year we’ll be at home. There will be media pressure, fan pressure, family pressure. We’ve been preparing for it. This is a special year for all of French hockey and for the players. It’s an exciting time for them.”