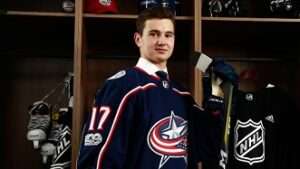 By Mitch Stacy – The Associated Press

Fortunately for the Columbus Blue Jackets, a team called KalPa in the Finnish hockey league completed its season last month well below the line to make the playoffs.

Alexandre Texier, a 19-year-old centre, scored in overtime to win KalPa’s finale on March 14 . Then he packed up and headed to North America, making his continental debut with the Blue Jackets’ top farm team two days after he stepped off the ice in Finland. The stay in the minors would be brief.

Last Friday, Texier, who is from Grenoble, France, made his NHL debut in a playoff-clinching win by Columbus at Madison Square Garden in New York with his parents in attendance. A day later in Ottawa, he scored his first goal , collecting a pass from Oliver Bjorkstrand in full stride and ripping it in like an NHL veteran.

Texier has impressed everyone who matters. He insisted he is not nervous even the slightest bit, even though the spotlight will get much hotter when Columbus opens the playoffs on Wednesday night at Tampa against the league’s best team.

It’s been a whirlwind for the kid who was a Blue Jackets’ second-round draft pick (45th overall) two years ago .

“No, to be honest, never,” Texier said when asked if he thought he’d be in the NHL right now. “You never know what’s going to happen tomorrow, so just enjoy the time here.”

Texier did not come out of nowhere. Columbus general manager Jarmo Kekalainen has been watching him and talking about him since Texier came under the team’s umbrella two years ago. He was one of three prospects the GM deemed untouchable at the trade deadline.

The Blue Jackets couldn’t get him here fast enough. After leading KalPa in assists, points and shots, he tore it up in Cleveland with the Monsters, collecting five goals and two assists in seven games. Then came his high-pressure NHL debut Friday in which he handled himself admirably.

“He’s not nervous,” Blue Jackets coach John Tortorella said. “In fact, he plays with a type of arrogance that for the age of the kid it’s pretty impressive. You can see his intelligence of the game, he’s physical when he needs to be, he’s engaged on pucks. He’s impressive, and he’ll play (in the playoffs).”

Blue Jackets centre Pierre Luc-Dubois knows something about being a hockey prodigy. He debuted in the NHL at 19 last season and turned into one of the team’s stars. He’s also from Quebec, so he can speak French and communicate with “Tex” better than his other teammates.

And talk about a small world: They discovered their fathers played together for a season in Canadian junior hockey years ago.

“He’s really smart, skilled,” Dubois said. “He’s one of those players that you can you just see plays with his instincts, doesn’t think about the game too much, just goes out there and has fun.”

Texier, who seems to have adapted seamlessly to the different rink dimensions in North America, likely will play with Bjorkstrand and Nick Foligno on the fourth line, although Tortorella is known for mixing things up.

“It was a bonus for me (to join the Blue Jackets) because they are a pretty good team and they want to make the playoffs, so I didn’t expect anything,” Texier said.

Tortorella said he’s not hesitant about throwing Texier into the playoffs, regardless of his tender age and lack of experience.

“This kid here, I just think he had an attitude that he’s not afraid of anything,” Tortorella said.