From Boston to Belfast 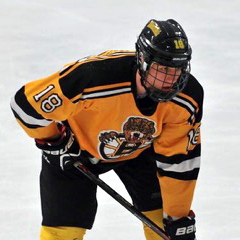 It’s been a tough week for the Netherlands. With the country’s top team, Tilburg Trappers, still in German playoff action, head coach Chris Eimers is forced to go with a young roster and hope that some of his more experienced guys can get to Northern Ireland in time to help the team’s bid to stay up in Division IB.

But crisis brings opportunity: that youthful line-up gives a chance to run the rule over the next generation of Dutch hockey talent. Among the youngsters who are growing up fast here, 20-year-old Guus van Nes has been one of the most eye-catching.

A year ago, he was scrapping for minutes on the fourth line in Jaca as the Dutch took gold in Division IIA. This time, he’s got a spot on the Netherlands’ top line, replacing injured assistant captain Raphael Joly and looking to supply the cutting edge that can preserve his country’s Division I status.

And, despite a tough tournament so far – three losses, 20 goals against and just three scored – the Boston Bruins junior prospect is enjoying the added responsibility.

“This tournament has been great for me,” he said. “The older guys on the roster – guys like Kevin Bruijsten – have been helping me out and I’m learning a lot. I know I’ll be a better hockey player after this experience. It’s great for my development, adjusting to a different level, playing against guys with a lot of international experience.”

That upbeat attitude typifies the Dutch approach to this tournament: dealt a rough hand by the conflicting schedules of club and international competition, Eimers and his team remain stoic – and optimistic.

“We understand the situation we are in, but there are still two games to go,” van Nes added. “If we can win one of them, we that will probably mean we stay in this division. It’s tough, but we’ll try to make the best of it.”

On a personal level, this season has been something of a break-out for van Nes. Coach Eimers was delighted with his player’s progress since Spain in 2016 and insists that the youngster’s current prominent role is on merit, rather than necessity.

“Guus really developed last year,” Eimers said. “He was with us last year in Jaca and he did well there, but since then he’s had a really good camp. When the situation arose with Joly [and his injury], we felt that Guus deserved to be bumped up to that line alongside Kevin [Bruijsten].

“He’s really grown this year, he’s definitely a young prospect and one of the better U20 guys who came here. Now we’re waiting to see if he can get a scholarship with the NCAA.”

For his part, van Nes credits his progress to a summer of hard work and a big opportunity with the Junior Bruins in the USPHL, a Junior A Tier 3 league. The Dordrecht native is in his third season with the organisation, and this time round he plundered 45 points in 43 games in the Premier Division in his most active and most successful campaign to date.

“Being over there is helping me a lot,” he added. “Playing in America is a totally different game. I’m skating a lot and I feel like I get better day on day. It’s very different to playing in Europe, but the whole thing is just an awesome experience.”

For a young player emerging from a relatively small hockey nation, the Bruins name is also a nice line on the resume – even if it’s some way from the fame and glamour of the world-famous NHL team.

“Obviously you don’t feel the whole Bruins history and mystique when you’re playing on a team at that level, but it’s still a good name to a part of and it attracts more people to come and watch, so it’s quite exciting that way,” van Nes added.

For now, though, the focus is on Division I survival. “We feel our performance is better than our results and we’ll see what we can do about getting that win,” van Nes concluded.