From the Himalayas to the world

We are in the middle of a short ice hockey season for India where the sport is mostly played at the foot of the Himalayas in Leh in the Ladakh region.

India’s hockey heartland is located in one of the most northern territories of the country where mountain ranges separate India from Tibet, China, while New Delhi is located 500 kilometres to the south.

The story of the local hockey community has created many stories that even led Canadian Hall of Famer Hayley Wickenheiser to travel there and bring equipment. Our first story on the Indian women dates back to 2012 with the header “Confidence through hockey”.

“There are many mountains in my region. It is very beautiful and mostly people depend on farming. In the city there are also government jobs,” said one of the Indian women’s national team players, Dorjay Dolma.

The parents of the 26-year-old work in farming too and even the sport of ice hockey is connected to it. The water reservoir that is used to irrigate the fields during warmer periods becomes a pond in the winter. With temperatures of currently between -22°C and -7°C (-7 to +19°F), it’s hockey time!

The hockey season runs from mid-December until mid-February, otherwise the players have no ice.

Dolma has been the second goaltender of the women’s national team and as such had a prolonged season because the team plays internationally each spring in the IIHF Ice Hockey Women’s Challenge Cup of Asia, a program designed for Asian nations whose hockey programs are developing and not big enough yet to participate in the World Championship tournaments. Although several Asian countries have made the move to the World Championship program in recent years after getting their international ice time on the continent.

“We play in winters in Leh and afterwards we go to the tournaments. Sometimes we go to the host country one week earlier to practise there,” she said. There the players have to cope with a different environment.

Ice hockey started first with the army located in the region in the ‘70s. In the first attempts of the men’s team in IIHF play about a decade ago they had to learn playing with boards when they didn’t have any in India where they played for the national championship on natural ice but in front of thousands of spectators at tribunes.

Meanwhile the first boards have been installed at one rink in Leh. The hockey rink gets some upgrading each year. Still, for the Indian women it means going from frozen ponds to ice rinks in shopping mall in places with hot climate such as Abu Dhabi, Bangkok, Kuala Lumpur or this year in Manila in the Philippines.

It also means having to save many pucks for the Indian goaltenders against opposition that can play the sport all year.

“Sometimes it looks very difficult to save the pucks but I want to do it and make it easier to me,” Dolma explained.

Having Wickenheiser visiting her and her colleagues and going to Wickenheiser’s festival in Canada was a big moment for her.

“She came to Ladakh to see us through the Ladakh Women’s Ice Hockey Foundation where we give coaching to young girls. She saw our documentary on YouTube and came to Ladakh, brought us some equipment and hosted us in Canada for 20 days. It was the best place I have ever been to play hockey,” she said. 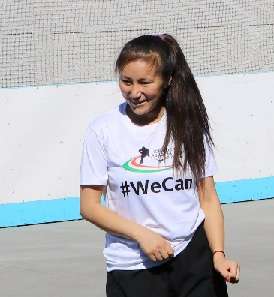 Dolma studied at SECMOL (Students’ Educational and Cultural Movement of Ladakh) where ice skating and ice hockey are part of the program in the winter season.

“We learn lot of things. We learn English, about the world, farming, everything. In winter we make our own rink with the teachers. We flood it with water and after one week we play hockey at the rink. The school is a very supportive institute,” Dolma said.

Her main topics were economics, English, Indian history and political science. After graduating she started working at a hotel last year. She came to ice hockey without previous knowledge about the sport and one of her four younger sisters plays the sport as well. In her free time she likes hang around with her friends in the village and make jokes.

“My parents don’t know how to play hockey. I showed them pictures on the phone,” said Dolma, who was also part of the IIHF Women’s Goaltending Development Camp last year in Slovakia.

“It was my first time in Europe. It was a very nice and beautiful place. My grandfather, my parents and the Ice Hockey Association of India supported me to go there,” she said.

“It was a really good camp for me. I have never had the chance before. I learned more about body movement, how to slide, to track the puck. Their teaching technique was very unique for me,” she said. And although she says she was hesitant because she’s shy, she had the chance to be on the ice with former goaltenders from the Olympic Winter Games helping the young goaltenders.

“We are all dreaming that we will one day participate in the Winter Olympics,” she said.

It’s still a long way for India to get there but soon after the ice season in Leh is over, the Indian women’s national team will travel to the 2020 IIHF Ice Hockey Challenge Cup of Asia in Manila where they are seeded in the Division I tournament with the United Arab Emirates and Kuwait.