GB Women To Take Part In EIHA U20 Cup Competition 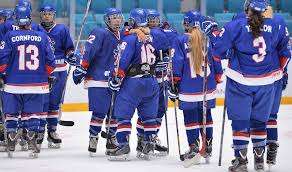 The games – against six men’s U20s sides – will form part of the national side’s preparations for the 2018 Women’s World Championship Division II Group A, being held in Dumfries in April 2019.

GB Women will be joined by Billingham Stars, Coventry Blaze, Deeside Dragons, Kingston, Nottingham and Whitley Bay in the cup competition and a full list of fixtures will be announced shortly.

Cheryl Smith, Great Britain Women head coach, said: “Playing games across the season ahead of the World Championship will be of massive benefit for us.

“Camps are always useful and we will still have those at times throughout the year, but getting game-time is invaluable.

“I would like to thank the EIHA – and in particular Geoff Hemmerman and Jackie Pye – for making this possible.

“It will really help our preparations for the World Championship in Dumfries and give us a great opportunity to see players in game situations throughout the season.”

“It is an important year for GB with a World Championship on home ice and we are glad to be able to provide the national side with games by playing in the cup competition.”

All matches in the U20 cup competition will be played under women’s non-checking rules.