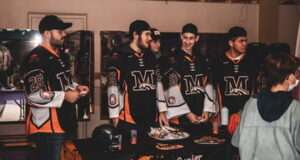 Temur Vedyapin went down in history. The twenty-year-old striker of the Georgian ice hockey team became the first native of this country to sign a professional contract in Canada’s homeland of hockey. Now Temur is a Foward of the Maniwaki Mustangs club, which serves in one of the youth leagues – CPJHL (Canadian Premier Junior Hockey League). This is one of hundreds of hockey leagues in North America, and the tournament in its format can be considered as the championship of the province of Ontario.

Vedyapin successfully started – in his debut match, he scored a goal for his new club. The other day will be another debut – after a short field trip, the Mustangs return home and play on their home ice with their fans.

And this significant event occurs when the Georgian hockey players playing in group “B” of the second world division, in fact, have no ice. By and large there is nowhere to train. At their disposal are non-standard-sized ice rinks (one hockey zone in size, i.e. one third of the court) in Tbilisi, built for skaters back in 1950, and where they were very reluctantly and very irregularly allowed to go, an ice rink in Batumi, and in winter an open area in the winter resort of Bakuriani, built by local hockey players of the Mimino team – the most titled in Georgia. Tbilisi clubs Fiery Crusaders, Ice Knights, Gray Wolves are trying to stop her from winning the country’s champion year after year. By the way, Temur Vedyapin also played for the latter.

The conditions for Georgian hockey players who are a few steps away from knocking on the next division in the class, after which the elite already follows, the one where Canada and Russia, Czech Republic and Sweden, etc., Spartan fight for the world title. The authorities promise to start building a normal sports palace for winter sports in 2020. But there were many such promises, and so far the matter has not budged. Therefore, I don’t want to say that the problem is about to be solved. At least because of signs, such as not to jinx it, it will turn out like in one of the cities of Western Georgia.

There, a kindly businessman of good will suddenly became preoccupied with the state of affairs in winter sports and decided to build a small palace of his name for hockey players and figure skaters. But he hoped for something to build a kind of object for local builders, and he did not call foreign ones who had experience in building ice arenas. In the end, they say, it turned out to be something unsuitable for anything. And it was completely not intended for hockey, because the court turned out to be square, and ordinary glasses, although of extraordinary thickness, were used as protective glasses. In general, a platform for hockey players, fed up with life to the extreme. Perhaps the story is hyperbolized, but the fact is that hockey players still do not have their own arena.

Meanwhile, the history of hockey in Georgia is not so few years. The national team participated in the sports days of the USSR in the 1960s. Even without success. In the 1970s, during the years of the beginning of the battles of the Soviet national team with Canadian professionals, a fan boom was observed at all. Ice battles of the USSR national team at world championships, Olympics, in North American tours, people watched on television, of course, not totally, but with enthusiasm. The names of Maltsev and Kharlamov, Clark and Esposito were not an empty phrase in Georgia. And not in one Tbilisi or Kutaisi yard, the kids drove a puck or a small ball with their sticks on the asphalt, and sometimes the recessed but quickly melting snow. A group of fanatics gradually crystallized out of the mass, always playing, at any time of the year, selflessly, until the legs were numb. In summer – on asphalt, in winter – on compacted in very hard hypostasis snow, less often ice. But snow did not fall in Tbilisi every winter. But the team even managed to win some tournament. In those years, by order of Leonid Ilyich, who loved hockey, they began to develop this wonderful game throughout the immense USSR. So much so that even in Tashkent a hockey team of masters appeared.

In non-hockey areas it was … easier. For the report, several children’s matches and all the best were held in front of Moscow. A man from the district committee of the city committee came to these games and pretended to be involved in the organization of the match. Just after all. Matches were? There were. Was Raykom? It was. Hockey, then, is developing. Hello beloved Ilyich. Just in case – to the mausoleum too. However, the legendary Anatoly Tarasov, the former coach of the USSR and CSKA national teams, and Anatoly Firsov, one of the best strikers in the world of the 1960s and 70s, somehow arrived at one of the tournaments in Tbilisi. After observing the children, they issued a verdict: Georgians will be able to play well, but constant conditions are needed.

However, the “big” people who praised greetings and reports, additional expenses and troubles were useless. And hockey fans were not among them. Of course, they did not prohibit the ban on playing, but waved their hands so that hockey began to seem doomed. The only skating rink, the mentioned skater school in Tbilisi, was reluctant to let them in. And so that the ice does not really spoil, it was forbidden to play the puck. Instead of her – ordinary socks, twisted into a ball and secured in such a form with electrical tape.
Winter was easier. In Bakuriani, this time of year is always snowy and cold. The guys on their own filled the rink (by the way, many hours of exhausting work) and played. Few people knew about this …

So, in spite of everything, Georgian hockey players quietly “played out” before the World Championships in the fourth (lowest) division. Let’s go to Luxembourg. Expectedly lost all matches. Not all dry – which was a success. They piled not childishly a couple of rivals than me, a fan of the Philadelphia Flyers, enthralled. Came back home. And again, the same perennial problems. Although not really …

With ice it became a little easier. In Tbilisi, the city hall in the winter began to arrange artificial ice rinks, which hockey players sometimes managed to break through and arrange demonstration matches. Four clubs continued to play their championship in Bakuriani. About all this, Tbilisi Go Group Media made a wonderful watch film “Rare Breed”. In a word, hockey players began to pay attention. And they immediately paid off truly fantastic successes – they won their division, then the next one and, as they said, reached the group “B” of the second division, in which they took third place in April this year. In April 2020, in Iceland, Georgian hockey players will once again compete in this division for promotion – in rivals: Belgium, Bulgaria, Iceland, Mexico and New Zealand. With a successful performance at the next tournament, rival teams of Georgia, such as Poland, Kazakhstan, Japan, Slovenia, can become Georgian rivals.

“The team is carefully preparing for the tournament in Iceland, where there is a struggle with rivals who have much better conditions for regular training and matches than ours,” says Ilo Davydov, president of the Georgian Hockey Federation.

His brother – Denis, has a special colossal role in the fact that hockey survived in Georgia. It was Denis Davydov who headed the Federation, probably in the most difficult period for Georgian hockey. Then the country was absorbed by catastrophic problems, which put a question mark before the existence of statehood as a whole. And in those conditions, only an extraordinary person who wholeheartedly devoted to the idea could go to instances, achieve something for hockey. Denis Davydov retained hockey for Georgia. Alas, he himself does not see the success of the case to which he devoted himself entirely – ten years ago he died in a car accident in Turkey, where he went on hockey affairs.

In Iceland, the Georgian national team will probably have a harder time than other tournaments. The application with the names of the hockey players and the names of the clubs they represent will feature the Canadian team. And this is a guarantee of increased attention of rivals.