Germans in, Swiss out 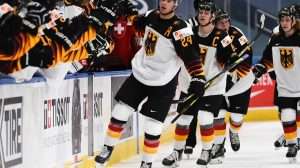 The resilient Germans continued their ascent in the Group A standings tonight, defeating Switzerland, 5-4, in a wild and hairy game that nearly saw a miracle comeback from Switzerland.

With the win the Germans have earned a place in the quarter-finals at the expense of those Swiss, finishing in third spot.

This marks the first time the German U20 team has ever qualified for the playoff round. The Swiss, meanwhile, finish the tournament without a win and are eliminated from further play, although they will not face relegation and will be back in the top pool next year. They scored just five goals in four games, but four of them came in the last ten minutes of tonight’s game as they fought back from deficits of 4-0 and 5-2.

“We didn’t play a bad game, but we have to score a couple of goals in the first 20 minutes,” said a disappointed Noah Delemont. “We played well in the second period, but we missed two empty nets. That can’t happen. Then it’s 4-0 and it’s pretty tough to come back. But we showed some character at the end, and that’s good for next year.”

“It’s disappointing sitting in the room after the last 20 minutes and think that we should have been able to do more in all our games, especially this one,” Noah Meier added. “We had the same problems in this game. In the first two periods, we took too many penalties. That was our biggest problem during the whole tournament.”

This same German team that just a few days ago lost to Canada 16-2 will now face the second-place team in Group B in the playoffs on Saturday. The Germans could dress no more than 14 skaters in its first three games but managed to play with 19 tonight thanks to available players removed from quarantine.

Tonight, the story was simple—the team’s best players played their best. And that means a dominant performance from captain Tim Stutzle and his linemate John Peterka. Peterka had three goals and two assists while captain Stutzle had two goals and three assists. Theirs were dominating performances, to be sure.

John Peterka opened the scoring at 4:38 on a quick and alert play. Goalie Thibault Fatton made a save at the left post, but Paterka got the rebound from behind the net and stuffed it in the other side before Fatton could get over.

Just four and a half minutes later, Stutzle scored a beauty. He made a move on Cedric Fielder at the Swiss blue line, fought him off as he went to the net, and deked Fatton, who went down too early. The Swiss challenged the play, believing Stutzle was offside, but video review showed the German was in control of the puck and the goal counted.

They made it 3-0 during a two-man advantage late in the period. This time Stutzle hit the post with one shot, then dished off to Paterka, who wired a blast short side over Fatton’s glove to complete a perfect period for the team.

Stutzle continued to wreak havoc in the Swiss end in the second, scoring the only goal and putting the game well out of reach for a Swiss team that had the most anemic offence in the tournament.

Paterka fed him a gorgeous little pass along the boards and Stutzle held the puck as he went to the slot, outwaited Fatton, and slipped it in the short side at 13:19.

Oddly, however, the Swiss had the better of play in the second but simply had no finish, no puck luck, nothing when they got near the German goal. Pucks bounced over their sticks; they misfired; pucks rolled by the post. Nothing.

Midway through the third, the Swiss finally connected off a faceoff win. Noah Delemont’s quick point shot trickled to the net and bounced off the skate of German defencemanMaksymilian Szuber. Then just 56 seconds later, they scored again. The second came off a loos puck in the German end. Ronny Dehler whleed and fired, and his shot snuck under the glove of Florian Bugl.

The Swiss came on strong and the Germans were on their heels, but the victors held their own when it mattered most. Coach Marco Bayer pulled Fatton with three and a half minutes left, but Paterka scored an empty netter with an assist to Stutzle to seal the victory.

Justin Volek took a major penalty for cross-checking, though, putting the game in peril for the Germans. With Fatton on the bench, Noah Meier got another at 18:14 to make it 5-3, and then Simon Knak scored with 25.6 seconds remaining to make it a one-goal game.

The Swiss got the puck right back into the German end but couldn’t get that final goal to tie the game, going home in defeat after a vailiant comback in the last half of the period. And the Germans are off to the quarters, but would have preferred a more comfortable ending to celebrate.