Germans Shock Sweden to Advance to First Semifinal Appearance Since 1932 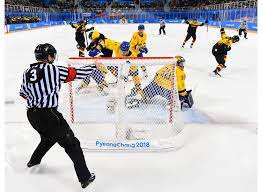 Patrick Reimer was the hero for Germany, giving the team that was ranked ninth-place in the round-robin a shocking 4-3 victory against the top-ranked Swedish team to advance to the semifinals.

Germany had never previously beaten Sweden at a major men’s competition, having only recorded two wins against the boys in yellow in exhibition contests in 2013 and 2016. The victory put them in the final four for the first time since 1932, a major accomplishment for a team that had to play their way into the 2018 tournament in a qualification event back in 2016.

Unexpectedly, Germany found themselves up by two goals early in the contest in a shocking start for the Tre Kronor. At 13:48, a power-play blast by former NHL defenceman Christian Ehrhoff made it 1-0 after the big blueliner took a pass from Patrick Hager, beating Viktor Fasth to make it 1-0.

29 seconds later, the Germans shockingly opened up their lead further. This time, Marcel Noebels was the beneficiary of a loose puck in front of the net. Noebels, a former Philadelphia Flyers prospect, would grab his first Olympic goal after pouncing on the disk before either Swedish defender could turn around and scoop it away, with Noebels knocking it past Fasth to make it 2-0 Germany.

Sweden was unable to change the score at the 40-minute mark, putting them in desperation territory. It was becoming to look like shades of 2002 when Sweden lost to Belarus in the quarterfinals, a team Sweden should have had no issue rolling over. They had already beaten Germany earlier in this tournament, but with a 1-0 victory coming off of the first shot of the game, there wasn’t a lot of confidence that the Swedes could reverse the deficit.

But they still found a way to score twice. At 6:25, top NHL Draft prospect Rasmus Dahlin, who had seen just two shifts prior to Sweden’s goal, took a shot from the point that landed in front of Danny Aus den Birken. Anton Lander was there to scoop up the puck and beat the German goaltender, giving Sweden their first of the game.

Then, at 9:35, Patrick Hersley one-timed a pass from Linus Omark on the man advantage to put the Swedes back within one, just a minute after Dominik Kahun scored Germany’s third goal of the contest.

Germany was doing everything they could to hold on, but at 11:37, the Swedes tied it up for the first time in the game. Mikael Wikstrand would do the deed, sending a perfect wrist shot over Aus den Birken’s glove to make it 3-3, making an exciting game even closer late.

The game would require overtime, the second game to do so in the quarterfinals. Reimer came up huge when it mattered most, scoring shortly after the puck dropped to give Germany the shocking 4-3 victory and a spot in the semifinals on Friday against Team Canada.