Germany gets first win in OT 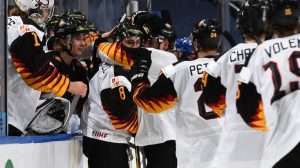 The winner came on the power play at 4:01. Zimmermann scored on a wrister from the high slot with traffic in front of the Slovak net.

In regulation time, Florian Elias added a goal and an assist for Germany.

“I think we have a good spirit in our team and we wanted to win this game,” said Elias. “In the locker room we were so hot. I think that was the reason why we won.”

Michal Mudrik scored twice for Slovakia. Oleksiy Myklukha, who was in the box for hooking when the overtime winner was scored, had the other goal for coach Robert Petrovicky’s team.

“To be honest, we wanted to take the three points today,” said Mudrik. “So it’s kind of disappointing.”

The win is an important boost for Germany’s quarter-final hopes. Both these teams have one preliminary-round game left. On Wednesday, Slovakia battles Finland, while Germany faces Switzerland.

German goalie Florian Bugl made his World Junior debut. The 18-year-old Bugl, who has a 2.07 GAA and 92.6 save percentage with RB Hockey Juniors of the AlpsHL, was unavailable for Germany’s first two games due to tournament health protocols.

“In the beginning, it was tough, because I only had two ice practices before,” said Bugl. “But I think I improved over the game and got more confident.”

The intensity and will to win was high. Coming off a hard-fought 3-1 loss to host Canada on Sunday, the Slovaks didn’t appear unduly fatigued. Meanwhile, Germany’s go-to players stepped up while logging big minutes. Stutzle played 31:01, Gnyp 28:32, and Elias 27:25.

“It was exciting, but our legs are done right now!” said Elias. “But I think we’ll get the physios and tomorrow we’re fresh again.”

Stutzle, a first-round pick of the Ottawa Senators (#3 overall in 2020) who just signed his NHL entry-level contract, drew first blood at 5:39 with impressive hand-eye coordination. Gnyp’s point shot was first tipped by Elias, Germany’s points leader, and then redirected again by Stutzle.

Mrazik made it 1-1 shorthanded at 10:07. The Slovak assistant captain jumped past the German defence, grabbed a loose puck, and flung a backhander through Bugl’s legs. Mrazik celebrated by kissing his glove and pointing skyward as his teammates mobbed him.

“My grandpa passed away a couple of weeks ago, and he was my big fan,” Mudrik explained.

With under three minutes left in the first, Stutzle had another glorious chance on the rush from the high shot, but Latkoczy came out to challenge and allowed no rebound.

At 3:10 of the second period, Myklukha put Slovakia up 2-1 with his first goal of the tournament, taking a beautiful stretch pass from Jakub Kolenic and deking to the forehand before tallying five-hole.

The Slovaks faced adversity when German forward Enrico Henriquez Morales hit Slovak captain Samuel Knazko awkwardly into the boards. Knazko was helped off and received attention on the bench, but would return to the fray.

At 8:13, Stutzle notched the power-play equalizer with a blazing end-to-end rush and a bit of luck. His shot off Latkoczy’s left shoulder bounced in off Slovak defenceman Simon Becar, who was standing in front.

Elias praised Stutzle’s leadership: “I was playing with him two years, so I already learned a lot from him. In the locker room, he’s a quiet guy. He’s the captain of our team, so he wants to push us. He’s unbelievable.”

Near the midway mark, the Germans ran into penalty trouble. First, they got dinged for too many men on the ice. John Peterka nearly gave Germany the lead with a shorthanded break, stripping Myklukha at the German blueline and racing in on goal, but Latkoczy foiled his backhand move.

Refusing to wilt, the Germans tied it up with the man advantage with just 46 seconds left in the second period. On a play reminiscent of Al MacInnis and Joe Nieuwendyk with the 1989 Stanley Cup champion Calgary Flames, Gnyp took a hard shot from the line and Elias extended his stick to tip it in.

The third period took a toll, physically and mentally. German defenceman Steven Raab writhed in pain after taking Knazko’s shot off the inside of his knee.

Bugl made a stellar save on Maros Jedlicka with under four minutes left in regulation to give Germany a chance. Moments later, off a faceoff in the Slovak end, Stutzle rang a shot off the cross bar.

Looking forward to playing Switzerland, Bugl said: “”I expect that we will win and maybe advance to the quarter-finals. And if we keep up the team spirit, we’re definitely gonna win.”

Slovakia is bidding for its third World Junior medal of all time (bronze in 1999, 2015). Germany’s best-ever finish at this tournament is fifth (1981 as West Germany).