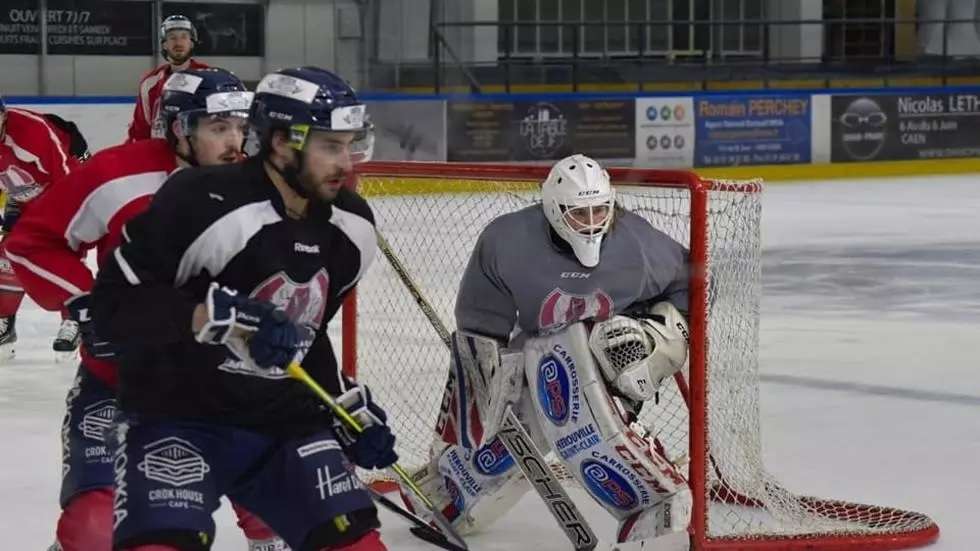 Charlotte Cagigos training among the men

Charlotte Cagigos is the backup goaltender for the Drakkars of Caen, an otherwise all-male team in France’s Division 1 ice hockey league. Her story is exceptional in French professional sport.

A woman plying her craft surrounded by male colleagues is rare in French sport, but that is what every day on the job looks like for Charlotte Cagigos.

Cagigos played her first minutes as a first-team player for the Normandy-based club in an exhibition friendly against the Neuilly-sur-Marne Bisons on January 6.

“The match went pretty well. There was a bit of pressure because it was my first match but that’s not what weighed on me the most. A lot of media were interested in my story and I thought ‘Wow! This actually isn’t very common,’ when for me this game was the logical next step in the journey. I knew the opportunity would present itself at some point since I had been with the group since September,” Cagigos recounts. “I saw that I represented a woman who was playing with the men. And I told myself that, if I had a bad game, it would reflect badly and people would say that women don’t belong here.”

“It’s bizarre to be in the spotlight suddenly when I’m a fairly discreet person. But I tell myself that it’s good for our sport, for the goaltender position and for women’s hockey,” Cagigos explains. “When I was little, I would have loved to see a girl playing on a top team and have her as a role model. I don’t necessarily want to become a symbol but I’d just like to show that it’s possible for little girls to play hockey,” she adds.

Originally from the southern French city of Montpellier, Cagigos first hit the rink at the age of three, following in her big brother’s footsteps. Her parents signed her up for skating lessons, expecting she would gravitate towards figure skating. But Cagigos only had eyes for hockey. “It very quickly became a passion. When I got home after practice on the ice, I’d put my rollerblades on to keep playing hockey,” she says. “While my big brother stopped hockey, my little brother took it up. At home, we always played together.”

At 14, Cagigos enrolled in a sport study programme and left her hometown to join France’s women’s hockey centre in Chambéry, in the Alps. “That’s where I discovered high-level sport. I was with the top girls in France and we played against the boys,” recalls the goaltender, who kept up her studies while in the programme, even passing her high-school baccalaureate final exams a year in advance.

Cagigos is an exception in France, not just within hockey but among all team sports. She is the only woman playing alongside men at the highest level.

Ice hockey is distinctive in that a woman can work her way into a men’s team in front of the net. “In hockey, the goaltending position is particular. The skills it requires are more technical than physical. Mixed sports, why not, but it seems to me difficult to extend to all sports,” Cagigos says.

In 2017, she felt she “needed a change” after a knee injury. “I was looking for a club that would give me ice time and allow me to learn, even as a girl. Not every team has that open-mindedness,” the goalie says. “During an interview in Caen, Virgile Mariette, who was in charge of the up-and-coming players, immediately told me that it wasn’t an issue for him whether I was a girl or a boy. As long as I worked, it would make no difference. That appealed to me right away.”

Another woman had already prepared the groundwork for the Drakkars in Caen. Nolwenn Rousselle, who was trained by the club, was the Drakkars’ official back-up netminder in the mid-2000s. Rousselle was the first woman to appear on a scoresheet in the Magnus League, France’s top men’s hockey championship, one notch above Division 1.

“It’s true that this club is distinctive in that way,” Drakkars’ coach Luc Chauvel tells FRANCE 24. “Nolwenn and Charlotte were used to playing with boys up to the Under-17s and so it was natural for them to move towards goaltending within the men’s leagues. We also try to encourage the development of women’s hockey, but it’s complicated to put together a team,” he laments.

Women’s hockey is considerably more developed in North America than it is in France. At the Olympics, only Canada and the United States have managed to claim gold in the sport since the women’s tournament began in 1998. Olympic goaltenders also have a history of trailblazing in top men’s leagues.

Canada’s Manon Rhéaume made history in 1992 as the first woman ever to play in the National Hockey League when she backstopped the Tampa Bay Lightning in a pre-season exhibition game. Rhéaume went on to win silver at Nagano in 1998. She and Canadian three-time gold medalist Charline Labonté both tended goal in the otherwise all-men’s Quebec Major Junior Hockey League. Goalie Kim St-Pierre, who also won three Olympic gold medals for Canada, has filled in at practice for the NHL’s Montreal Canadiens. The road to success is a narrower one in France.

‘One of the team’

In Normandy, Cagigos has been climbing the Drakkars ranks step-by-step. After two years with the Under-17 elite squad, she spent a season alternative between Caen’s Under-20s and the reserve team, playing in Division 3. Then, in August 2020, when the first team’s back-up goalie left the club, Cagigos officially claimed the job.

“Without being officially on the team, I was already training with them. From that point on, fitting into the team came pretty naturally. The boys were super welcoming,” she recalls.

“Charlotte completely deserves her spot. She’s a hard-worker. She gives it her all. She’s always fully invested and always wants to make progress,” says Chauvel. “She has fit in successfully. The boys consider her one of the team like anyone else.”

Cagigos has taken advantage of the absence of Caen’s number-one goalie, veteran France international Ronan Quemener, who is preparing the next steps of his own career by taking courses in neighbouring Rouen.

While the French hockey luminary has been sharing his experience with her, Cagigos knows she has a long way to go before she can score the role of number-one starting netminder like Quemener. “As it stands, I think I’m still a long way from a number-one goalie job,” she says.

“She still has a lot to learn and experience to acquire to be the number-one starter,” her coach confirms. “But I know that if I need her during a match, she is ready to go.”

The sensible young goalie wants to stay at Caen at least for the next two years, while she completes her Master’s degree in sport sciences “as insurance”. Beyond that, she wants to “not close any doors”, she says.

“I think I’ll find a Division 2 club where it would probably be easier for me to have ice time. Or I might try my luck abroad, in which case I’d switch to women’s championships,” Cagigos says.

Beyond her nascent dreams of a club career, Cagigos especially hopes to earn a spot on France’s national team. She has already had the opportunity to take part in several gatherings with Les Bleues. “Permanently joining the group to be able to compete in the Olympic qualifying tournament for 2022 would be a dream,” Cagigos smiles. “With Covid-19, the competitions were cancelled, just as the World Championships were, but the group has one objective in mind: Competing in the Olympics,” she says.

In Caen, Cagigos’s coach is on board. “She’s dreaming of the Olympics. We’re trying to do everything so that she can make it onto the national squad. The club’s objective is to lead her to the elite level, which would be tremendous for her and for us,” Chauvel says.

Cagigos feels fulfilled by her career so far, but she does miss one thing: The atmosphere in the dressing room, so important in a team sport. “I am all alone in mine. It’s the only sacrifice I make,” she says.