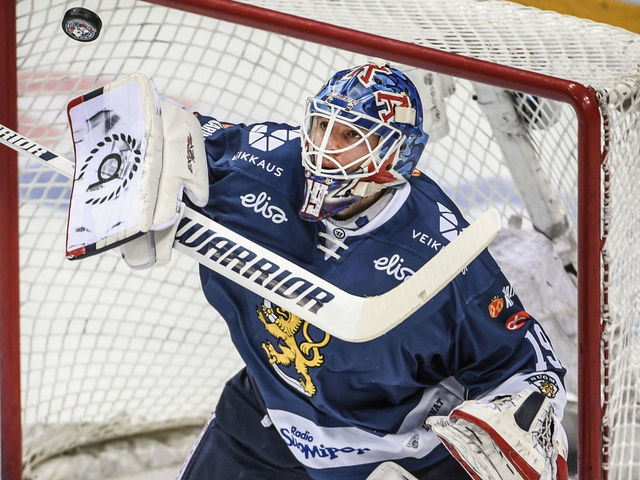 Craig Ramsay knows Russia has the best men’s hockey team at the Olympics.

He just doesn’t think Slovakia is far behind.

The former NHL coach is trying to make Slovakia’s players believe they can beat the likes of Canada, Sweden and the United States.

”We’re trying to change to get the mindset where we’re going to go out and try to win and not just hope we win,” Ramsay said.

Slovakia, Finland and Germany are undoubtedly underdogs in South Korea but have teams – and goaltending – that should make the traditional powerhouses nervous. In a short tournament with three pool games and single-elimination medal-round playoffs, there’s a small margin for error and a big chance for goalies to steal games.

No country exemplifies that more than Finland, which has medaled in four of the past five Olympics and has 6-foot-6 Kontinental Hockey League star Mikko Koskinen and longtime NHL goalie Karri Ramo between the pipes.

”That is our strength in Olympics,” Finland coach Lauri Marjamaki said. ”All three goalies are pretty good goalies, and Koskinen played many years in Russia, (won) KHL championships two times. Karri had a bad injury after the Calgary Flames, but now he’s (in) good shape and play pretty high level.”

Slovakia doesn’t boast the same name-recognition goalies or skaters as Finland, which has 2017 first-round picks Miro Heiskanen and Eeli Tolvanen and more former NHL players, but Ramsay has gotten great play in net so far. In four pre-Olympic tournament games, four different goalies earned first star honors for Slovakia, which could start Jan Laco, Branislav Konrad or Patrik Rybar when it faces the U.S. on Feb. 16.

”You’re a very smart coach when your goalie’s really good,” said Ramsay, a 66-year-old Canadian who coached the Buffalo Sabres, Philadelphia Flyers and Atlanta Thrashers and won the Stanley Cup as a Tampa Bay Lightning assistant. ”Our goalies – Konrad, Laco, Rybar – if they can play as well as they played in all our other tournament games, at least it gives us a chance.”

Ramsay wants Slovakia to play in-your-face hockey, a contrast from most international tournaments and the traditional European, trapping style. Slovakia has only a few former NHL players, including forwards Ladislav Nagy and Tomas Surovy, so it can’t afford to sit back against the Russians or Americans.

”There are times that you have to be smart, but we need to be more aggressive,” Ramsay said. ”We need to get everybody up ice. We need to have five guys together up ice and then five guys coming back. I would rather backcheck skating forwards than just stand around at center ice. I never liked that as a coach and I think we need to be more aggressive and go out there and try to win and not just rely on keeping the game close and hope we can score something later in the game.”

Finland might be able to win with a more conservative approach. The Finns are known for overachieving and being better as the sum of their parts in these kinds of tournaments, and Marjamaki is confident that will happen again.

”I know we will be a tough opponent for the other teams,” Marjamaki said. ”I think we play so disciplined and together and our commitment is great.”

Marjamaki said he believes Finland is on the same level as Canada, the U.S., Sweden and the Czech Republic, but acknowledged: ”OK is not enough. We need top-level (play) to succeed.”