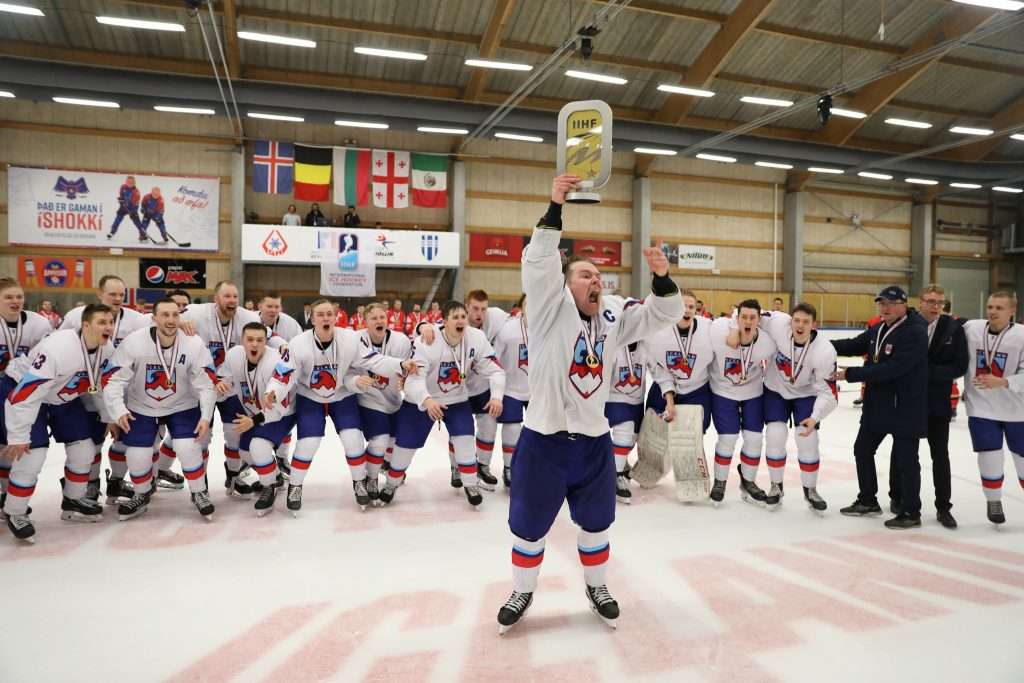 The host nation reeled off four victories, culminating in a 3-2 win over Belgium on Saturday evening to clinch gold in Reykjavik. Georgia, which began the tournament with a surprise win over the Belgians, took silver and recorded its best ever result in IIHF play.

At the other end of the table, Mexico lost all four games and finishes last of the five teams. New Zealand was unable to compete due to Covid restrictions.

Saturday’s showdown between top seed Belgium and host nation Iceland saw the Nordic country come into the game with a three-point advantage. After its 3-4 reverse against Georgia, Belgium needed to win by at least two goals against the undefeated Icelanders if it was to succeed in a three-way tie.

After an even first period, Belgium took lead in the second when Jacques de Ceuster potted his third goal of the tournament. Suddenly, Iceland’s grip on top spot looked less secure and Belgium was one marker away from assuming the lead. However, the home team responded with two goals in the middle frame to move ahead in the game and enliven the Laugardalur Arena crowd.

First, Gunnar Arason’s stretch pass sent Axel Orongan into the danger zone and he deked his way past a defender before beating Arne Waumans in the Belgian net. A needless foul by Hakon Magnusson put Iceland back under pressure, with Johann Ragnarsson called upon for a couple of big saves during the penalty kill, but late in the frame the host nation got in front. This time, it was a spectacular coast-to-coast effort from Halldor Skulason, who managed to squeeze the puck past Waumans just before his momentum sent him crashing into the net. The Belgians protested, claiming the frame was off its moorings before the puck crossed the line, but the officials awarded the goal.

Down, but not yet out, Belgium began the third period with a flurry of chances. The best of them went to Bryan Henry, who found himself clean through on Ragnarsson’s goal but could not find a way past the teenage goalie. Ragnarsson is rated as one of Iceland’s top prospects: this season he has been with Czech club Rytiri Vlasim in the country’s fourth league, gaining experience of junior and senior play in a country with a stronger hockey infrastructure than his native Reykjavik can offer. At this tournament he was deservedly named the top goaltender, thanks in no small part to his impressive performance against Belgium.

Ragnarsson finished the game with 44 saves; his opposite number Waumans faced just 26 shots. But Belgium was unable to find its way back into contention and a tripping call on Alec James handed Iceland the chance to finish the job. The home power play delivered: Orongan blasting home his second of the night from between the hash marks off Bjorn Sigurdarson’s feed. That wasn’t quite the end for Belgium: with 2:34 left on the clock, Frank Neven’s one-timer made it 2-3 as his team converted a power play chance. But there was no late drama as Iceland closed out the final minutes to secure its first gold medal in IIHF competition since winning Division 3 in 2006. Belgium, relegated from IIA in 2019, had to settle for bronze here.

The tournament triumph also saw Iceland’s head coach Vladimir Kolek banish the spectre of relegation in his first season in charge of the team. The Czech, who played several seasons in the Czechoslovak top flight with Dukla Jihlava, took on the Iceland role in the 2017/18 campaign when the team dropped out of Division IIA. The following year brought IIB silver behind Israel before the pandemic halted international play at this level. Back in action, Iceland returned with a youthful roster including seven teenagers while Orongan, a two-goal hero against Belgium, is a 21-year-old making his World Championship debut. There is still room for experience, though: Iceland’s leading scorers here were 28-year-old alternate captains Bjorn Sigardarson (3+6 points), Johann Leifsson (2+6) and 31-year-old Andri Mikaelsson (3+4).

This year’s tournament was also a big success for Georgia, which won silver and clinched its best ever result in IIHF play. In contrast with the winning Icelandic roster, this was an experienced team – average age 28 – featuring many players who have been involved throughout the country’s rise. Just eight years ago, Georgia played its first Division III campaign, losing all five games and allowing 78 goals in the process. In Reykjavik, though, victory over Belgium was followed with further success against Bulgaria (10-3) and Mexico (5-0). Only a 2-5 loss to Iceland slowed the progress of Roland Svanidze’s team.

Georgia also had the tournament’s leading scorers: Nikita Bukiya (7+4) and Ivan Karelin (5+6) both finished with 11 points from four games. Like many on the team, they learned their hockey in Russia, Bukiya playing two seasons in the second-tier VHL in his hometown of Saratov while Novosibirsk native Karelin was part of the system at KHL organisation Sibir before joining Mimino in the Georgian mountain resort of Bakuriani in 2018/19.