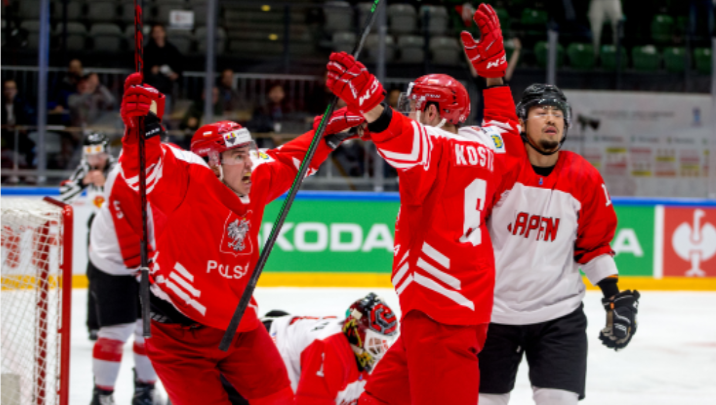 Arkadiusz Kostek was Poland’s unlikely gamewinner as the host nation took gold in Division IB. The 27-year-old defenceman is very much a stay-at-home type – until the 26th minute of today’s game. That’s when he grabbed his first ever World Championship goal, breaking the deadlock and setting Poland on course for a hard-fought 2-0 victory over Japan. Alan Lyszczarczyk added a clincher 96 seconds from the end.

Goaltender John Murray, so impressive throughout the tournament, also had another great game. He made 21 saves for his second shut-out of the championship, none bigger than his stop to deny Makuru Furuhashi a tying goal late in the third period. Murray finished with an impressive 97.78% save ratio but head Robert Kalaber would not be drawn into singling out individuals.

The result secures a return Division IA for the Poles, who were relegated in 2018. Prior to the tournament, head coach Kalaber told journalists that he believed IA was Poland’s natural level and now he has led his team back there.

Japan wins silver, its fourth medal in a row at this level, but a return to the second tier of global hockey remains elusive. Head coach Rick Carriere, who was the Oilers’ director of player development before taking the Japanese job last season, was disappointed with the outcome but encouraged by what he saw in Tychy.

“Games like this are what makes our program better,” he said. “You don’t always get this playing at some other events.

“But playing in a final against a good team like Poland, we learned some lessons and we’re going to get better from it.”

Poland had Aron Chmielewski in its line-up for the first time in this tournament. The forward slotted straight into the first line alongside Lyszczarczyk and Filip Komorski. All three are signed to Ocelari Trinec in Czechia, but while the latter have been available throughout the World Championship after ending the season on loan at farm club Frydek-Mystek, Chmielewski is part of the Ocelari first team that won the Czech championship on Thursday.

“I’m so happy,” Chmielewski said as his second championship party in four days got started. “I didn’t have much time to party with my friends in Trinec before coming here, but now it feels so good.

“The national team had to wait four years for this because of Covid. I’m so happy to be here and to be a part of it.”

In the first period, though, Chmielewski and his teammates found it hard to get much of a result from the Japanese defence. With a typically hard-skating performance, Japan limited Poland’s opportunities and that top line managed just one shot on goal in an opening stanza shaded by the visitor.

At the other end, helped by two power plays, Japan was more threatening. Early in the game, John Murray made a good stop from Yushiroh Hirano and Shigeki Hitosato fired a dangerous shot into the side of the net. Later in the frame, Hitosato was even closer when he forced a sliding pad save out of Murray on the second Japanese power play of the afternoon.

“I was worried before this game,” admitted head coach Kalaber. “When we played exhibition games with Japan, they were very strong. I expected them to be our closest rivals here.

“But I want to talk about our heroes. The way we sacrificed ourselves on defence. The way we stayed solid and organised. That was the key to this victory.”

If the weight of expectation hampered Poland in the first period, the host nation stepped things up after the intermission. Early on, Chmielewski set up Lyszczarczyk for a shot off the crossbar and Japan struggled to clear its lines for long spells. That pressure paid off: five minutes into the middle frame, Lyszczarczyk played the puck out from behind the net, Mateusz Bryk’s point shot was padded away and fellow defenceman Arkadiusz Kostek put in the rebound. Normally, the 27-year-old blue liner would have no business trying to emulate a centre; gold-medal showdowns, though, are a bit different and Kostek could hardly have picked a better moment to open his international account.

Poland hoped to extend its lead on a power play midway through the session, but instead Japan almost grabbed a short-handed goal when Makuru Fukuhashi jumped on a loose puck and engaged the turbos to sprint down the ice and shoot from the top of the circle. Murray made the stop, but in the subsequent puck battle Poland took a penalty.

In the third period, Poland looked to protect its advantage. Mindful of the danger of Japan’s pacy forward line, the Poles opted for a ‘safety first’ approach and, for long periods, there were few chances at either end.
There were still some anxious moments, though, none more so than Furuhashi’s 54th minute breakaway. The speedy forward came out of the penalty box and straight onto a stretch pass that left the Polish defence floundering in his wake. Murray, once again, saved his team and that stop was greeted with a cheer as loud as any goal in this arena.

But the final cheer was for Lyszczarczyk’s goal. Japan will lament a treacherous bounce off an official’s skate the presented the Polish forward with the chance to seal the deal, but few in the Tychy crowd will worry about that as the celebrations of a home gold got started in earnest.