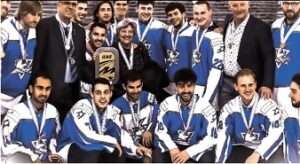 Israel isn’t normally thought of as a ice hockey hotbed, but this past week the Israel national team won the gold medal in the IIHF World Championship Division II Group B tournament held in Mexico City.

The accomplishment made headlines around the world as the blue-and-white flag was raised with pride to the rafters and Hatikvah was sung at full strength.

The Israel Ice Hockey Federation has been around for years, but just this January it joined with the Israel Hockey Foundation of North America, led by Executive Director Stacey Pressman.

“The official launch was at the World Championship with the goal of providing leadership, strategic direction, fund development and organizational resources for hockey in Israel and provide the momentum to create positive change through the sport of hockey,” explained an upbeat Pressman.

“As a Jewish Canadian I have always had a love for both hockey and Israel,” said the Montreal native now residing in Pittsburgh. “When my middle daughter was looking for a mitzvah project to celebrate her bat mitzvah, we decided to sponsor a group of young hockey players from Metula and the Canada-Israel hockey school to visit and train in Pittsburgh for 10 days in 2014.

“This was the beginning of my exposure to Israeli hockey and I have been involved as a spectator and friend ever since. Through a series of events it became clear that a foundation could be created to help and support the federation to grow its programs and help the Israel national team with North American donations and fundraising events.”

The foundation strives to provide opportunities for Israeli youth to travel to North America for hockey training, international competition and player development, while also providing critical resources to the Israel national teams to foster and promote positive hockey role models and national pride for youth in both Israel and North America, in partnership with the Israel Hockey Federation.

“With roughly 1,800 players registered in Israel, winning gold was very important,” noted Pressman. “This medal gives the children training in Israel and abroad hope that they, too, can one day be World Champions! It also brings recognition and exposure for those who may not even know that Israel has a hockey program. We have had a spike in interest in our clubs since the recent success of the men’s team and the U18 team which this year won a silver medal in the Division 3A competition in Sofia, Bulgaria.”

There are 12 native-born Israeli players on the team that participated in New Mexico, while another 10 are from various countries in North America and Europe.

The star of the team was Eliezer Sherbatov, who was born in Rehovot and plays in the Slovakian professional league.

But as Pressman explained, “For the team to be successful we must be great AS A TEAM, and that’s where our focus is, on the team as a whole. We are extremely proud of all of our players who gave everything they had while representing Israel, a tremendous honor.”