Growing the girls’ game in Indonesia

October of 2019 marked the second year in a row that World Girls Ice Hockey Weekend (WGIHW) celebrations were held at Indonesia’s Bintaro Xchange Ice Skating Rink. Young girls flocked to the rink to don skates and gear for the first time, accompanied by others already familiar with the sport who were eager to share their love of hockey with potential new players.

The WGIHW festivities have been highlights in the development of women’s ice hockey in Indonesia, a country that is still relatively new to the sport, having joined the IIHF in 2016. Driven largely by the efforts of coaches Ronald Wijaya and Andianto Hie, Indonesia got a boost in 2014 when Malaysian coach Gary Tan arrived to help build their development program.

“To coach the coaches,” Tan, who was the head coach of Indonesia’s men’s national team from 2016 to 2018, said of what his initial focus was when he first started working with the Indonesian Ice Hockey Federation. “That’s the most important thing, because the coaches are the ones who are going to develop the kids… At that time there weren’t many coaches, maybe three, but I think it has grown due to the nature of the sport right now. So most of the kids that I taught when I first started are coaching right now.”

While still a work in progress, the number of female players has seen some growth as well, in particular following the WGIHW events held in 2018 and 2019. The majority of Indonesia’s female players started out as figure skaters, transferring to ice hockey after seeing siblings or parents play the sport.

“At first I actually wanted [to play hockey], but my parents told me to do figure skating because there are more girls in figure skating,” said 15-year-old Qanita Feira Larasati.

Indonesia has a number of rising star players; 17-year-old Chiara Andini Salsabila, for example, was one of 44 female goaltenders who attended the 2019 IIHF Goaltending Development Camp in Slovakia. She regularly practises with expats and men’s teams.

“The commitment level from the girls, from what I’ve seen, is really incredible,” said Tan. “[In Indonesia, hockey is] a unique thing for a girl to participate in, and to have the passion and the drive to push themselves to improve is incredible.”

Despite sometimes having to travel long distances to get to the rink and struggling to overcome the stigma associated with girls playing hockey, Indonesia’s female players have developed an unbreakable love for the game and their teammates.

“Ice hockey is really fun, and the atmosphere and the people in the rink and the team – it’s really fun,” said 13-year-old defender Ghina Rameyza Salsabila. “It’s like my second or third home.” 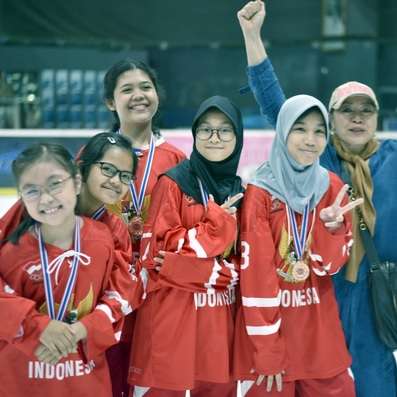 One thing Tan has encouraged the program to do since its inception is play in tournaments to gain game experience. Indonesia regularly sends mixed kids’ teams to tournaments around South East Asia, and while the first few were challenging, the teams have progressively seen improved performances and benefited from an increased following.

“I remember at the South East Asia Youth Cup, [when] we scored our first goal,” 15-year-old Farrah Zabreena Belle Synarso said as she recounted one of her fondest hockey memories. “Even though we lost [the game], we were so happy.”

Competing in tournaments has given Indonesia’s players something to aim for – a crucial element for improving player retention and giving aspiring athletes opportunities to achieve excellence. Many of Indonesia’s players have their sights set on moving up the podium at the South East Asia Youth Cup and improving upon their previous bronze medal finishes.

Meanwhile, the coaches are collaborating on delivering a development program that will see Indonesia climb the ranks in South East Asia and one day play in the both the men’s and women’s IIHF Ice Hockey Challenge Cup of Asia tournaments – and introducing more girls to the sport will be key to this.