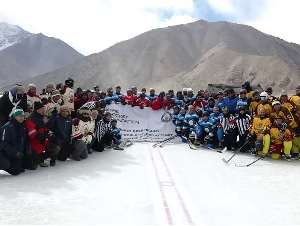 As many as six teams, including five international teams from Canada, Germany, Russia, the USA and India, participated in the tournament.

Reflecting on the same, Lundup, the secretary of Lalok Winter Sports Association, told ANI, “Guinness world record matches are going on here. There are 16 representatives in this tournament from a different part of the country. They are players from Canada, Germany, India, Russia and USA. This tournament is organized by the Ladakh Winter Sports Club (LWSC) in collaboration with the Lalok Winter Sport Association and with the help of the Hockey Foundation. Here the altitude is 14,050 feet of ice hockey ring. So, it’s the highest world hockey rink in this world.”

Tundup, a member of Ladakh Winter Sports Club (LWSC), echoed similar views and said that it is a proud moment for the entire country to host such kind of event.

“I am very happy that here the matches are being played for the Guinness World record. Here five overseas teams have come and there is one team from Ladakh. It is a big achievement for us to organize such kind of event in Ladakh. It is an honour for the entire Singey Lalok area of Leh district to have such event. It is a proud moment for our state and for our country because I believe such kind of event has never happened in India. I want to thank all the ministers of the state for supporting us,” he told.

Meanwhile, Anthon, who has been coaching ice hockey in India for five years now, revealed that they were planning the Guinness World record match for almost two years now and hoped to see many more events like this in future.

“I am from Canada. I have been coaching in India for five years. We have been organizing and planning this Guinness World record for almost two years now.It is such an amazing day for Canadians here those have been involved in the ice hockey in Ladakh. And all the Ladhaki people here, I am happy that they are joining and that they can enjoy this beautiful moment in the history of ice hockey in India. I hope in the coming years there will be more tournaments like this,” Anthon said.

Located at a distance of 160 km from Leh, the natural ice hockey rink is at the altitude of 14050 feet above sea level.

This International standard ice hockey rink is certified by Geological Survey of India.