Hockey in Puerto Rico: a story of triumph, destruction and a new beginning 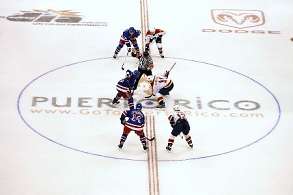 Destruction. Political interference. You name it, Puerto Rico has faced it. After years of having to use flip flops for goal posts, the territory is set to embark on its first international hockey tournament, something many never thought would happen. This is the story of hockey in Puerto Rico.

That’s the best way to describe Philip Painter and the Puerto Rican hockey team. Sneaking into arenas just to play a disorganized version of their favorite sport, only to have it all taken away by outside ruling parties.

But it wasn’t always this way.

During the closing stages of the 2006 NHL pre-season, San Juan, the Puerto Rican capital, played host to a game between the New York Rangers and Florida Panthers. It was the first NHL game played in the Caribbean and what should have been the start of a beautiful partnership between the NHL and the American territory. The game came a year after the grand opening of the 18,500-seat Jose Miguel Agrelot Coliseum, something that was set to kick off hockey in the area after years of organization.

It flopped. It didn’t help that the game was during the slowest tourism season in September, but poor promotion of the event led to poor attendance which is estimated to have been around 5,000 patrons.

“The government had to bus in children from local housing projects, just to have bodies in the building,” said Phillip Painter, the director of hockey in Puerto Rico and the man in charge of growing the sport locally.

It was supposed to be something special for an area that had been through so much just to make it happen. Early hockey action began on the island more than 40 years ago in a rink known as the Reina de Hielo in San Juan. In 1978, the rink shut down, so locals had to wait until the Aguadilla Ice Skating Arena opened up in 2004 to try again. Using a machine that he said looked more like a cross between a Zamboni and a golf cart, the arena would finally become reality. Thousands of people came to the opening day festivities. It truly looked like the sport could see some success on the island. Ex-pats showed up from North America looking for a chance to play abroad.

The NHL’s failure to capitalize in Puerto Rico resulted in no hockey being played in the main coliseum. Players had to travel three hours outside of San Juan just to play in Aguadilla. But as time went on, operations began to go downhill. The local government relocated skating programs to other areas or shut them down altogether. Hockey players began sneaking into the rink just to play in the middle of the night with makeshift equipment, but when the nets were thrown out, they resorted to using flip flops for posts and other equipment just to get a taste of the action. 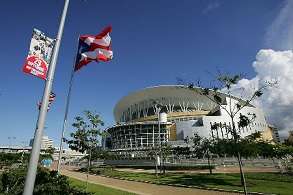 The federation tried talking to the NHL, NHL Players’ Association, USA Hockey and Scotiabank, among others, to help look for support. Nothing came from it, rendering all progress idle. The federation would make some requests to the Puerto Rican Olympic Committee and the Department of Sports and Recreation about the state of the sport, but the appeals went unnoticed. Meanwhile, there were still a lot of people sending inquiries to the Puerto Rican hockey website about hosting games and tournaments, all of which were impossible. The dream of building hockey in the Tropics looked unlikely.

“‘Diversity’ seemed to be the buzzword of the day, yet an entire continent was being ignored,” Painter said. “We don’t need licensed merchandise. We needed rinks and instruction, support and everything needed to create a true hockey environment. The rest will fall into place in good time.” 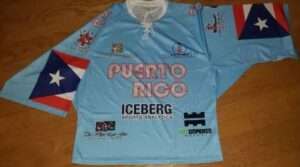 In 2011, the Panthers offered to run youth hockey camps in the territory, but the Puerto Rican government wouldn’t allow the team to book any ice time in Aguadilla. The Panthers still offered to help out, operating a street-hockey clinic for a couple of years. In 2013, fed up with the lack of support from the government, Puerto Rico sent a team out to Argentina to participate in the End of the World Cup, a small tournament involving other new hockey nations. Puerto Rico could only field a team of seven players, and with no ice to play back home (despite having the biggest arena of any of the countries involved), the team was a shell of what truly could have been something impactful. Hockey in Puerto Rico is completely self-funded by the players themselves, meaning every dollar counts when trying to rebuild a program on a limited budget.

But the introduction of sledge hockey in early 2017 provided hope. Maybe hockey could work, albeit in a different fashion than originally planned. The demonstration put on by the program was a success, and there’s a true interest in growing the niche sport there. But later that summer, thousands of lives were lost due to Hurricane Maria, and the territory continues to feel the devastation of the storm today. The rink in Aguadilla was used as an emergency center with extra supplies, water, food and more. But the arena suffered significant damage itself after battling winds upwards of 200 MPH, making further growth more challenging. Communication was limited for a while; Painter himself was left without power for five months.

Since then, it’s all been about rebuilding. Painter, a reporter at the San Juan Daily Star, has been in charge of bringing the rink in Aguadilla back to life. With the help of Ron Robichaud from the Florida Sled Hockey Association, the rink received new regulation boards, glass and dressing rooms. The one thing Puerto Rico has going for them is an actual rink, even though the one in Aguadilla isn’t an NHL- or IIHF-sized building. Haiti and Jamaica, for example, have played in tournaments in North America but don’t have rinks back home. 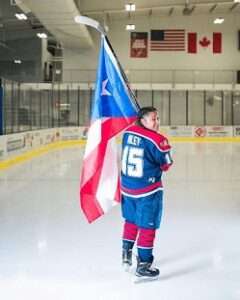 For Puerto Rico, it’s been a long road, but the hard work is about to pay off.
When it plays Argentina on Sept. 6 in Coral Springs, Fla., at the Latam Cup, it’ll mark the first time Puerto Rico has ever played in an international tournament. The Latam Cup, previously known as the Pan-American Ice Hockey Games, serves as a development platform for nations new to hockey to grow. Colombia has been the dominant force for most of the tournament’s existence, with Mexico, Argentina and Brazil all contending at one point or another. Jamaica and the Falkland Islands will also have players making their international tournament debuts this weekend. All games will be streamed for free on HockeyTV.com, which Painter said will be huge. “Every sports bar (in Puerto Rico) will be tuned in.”

Puerto Rico, fortunately, missed the brunt of Hurricane Dorian, but members of other nations weren’t so lucky. Some players had flights cancelled, and some early practice sessions were cancelled. Most of Dorian’s path will miss Miami, allowing the Latam Cup to operate, but it seems like terrible storms follow Puerto Rico’s hockey dreams everywhere.

No NHLer has ever been born in Puerto Rico, but Auston Matthews, Al Montoya, Scott Gomez and Max Pacioretty, among others, are of Latin American descent. S0me of Puerto Rico’s players for the Latam Cup have experience playing in Canada and the United States, and some even have college hockey experience.

“We followed IOC (International Olympic Committee) guidelines and were able to recruit stateside Puerto Ricans eager to represent our country,” Painter said. “I was surprised at the skill level of players. Although we haven’t had the chance to gel as a squad yet, I have no doubt we will prove strong enough to match up against anyone in our division.”

With more than 100 registered hockey players in Puerto Rico, the rebirth is in full swing. When the tournament concludes, the plan is to begin the final renovations to the rink. It’ll be utilized for a youth program and an adult 3-on-3 league, with players from Canada and United States showing interest. Just partaking in the Latam Cup is a step in the right direction for Puerto Rico, but there’s a lot of work still left to be done. Painter is determined to make hockey work in Puerto Rico and hopes to host the Latam Cup in the future.

The territory had to literally overcome destruction to get to where they are today. Any momentum Puerto Rico acquired over time was quickly terminated due to outside sources. For now, the team enters as underdogs in the second division – the ‘Bad News Bears,’ as Painter describes. But the only thing that truly matters is that Puerto Rico has finally arrived on the world stage