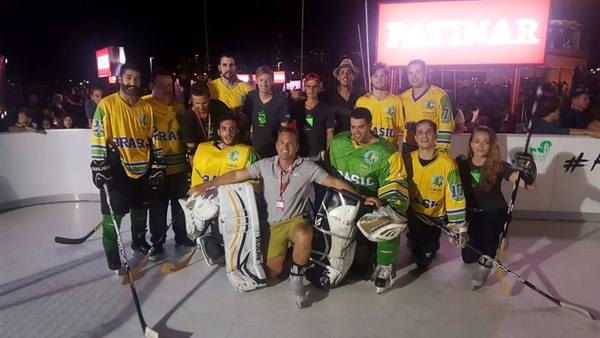 The 2016 Summer Olympic Games from Rio de Janeiro recently finished off with one of the most memorable Olympics in recent years, albeit for many negative reasons. Whether it be political turmoil, financial issues or general problems with the venues themselves, it was a tournament doomed from the start.

For Brazillian athletes, it was tough to see what the world was saying about the country. But while everyone was critiquing the world’s most talented athletes, a seemingly unknown Brazilian sports team was coming off a recent tournament appearance of their own. They’ve been together for a few teams, but unless you’re a hardcore fan, there’s a good chance you had no idea they even existed.

Like many warmer nations, Brazil got their hockey start on roller blades. In inline hockey, there are nowhere near the amount of teams that participate due to the lack of general popularity in the sport. Regardless, Brazil has put together a very serviceable team over the past few years, competing at the Division I tournament back in 2014.

But from their start, getting a chance to play hockey on ice was their goal. The team paired up with the Brazillian Confederation of Ice Sports, which gave them some legitimacy, but that was about it. They had to work their tails off to make sure they could hit the ice some day.

It seemed impossible, especially with their weather conditions, but they were still going to find a way.

They had no sponsors, limited funding and very few experienced players. But Brazil still entered the 2014 Pan-American Ice Hockey Games with high hopes and excited dreams. The brand new tournament was a strange one, getting delayed a while before eventually making their summer debut in 2014.

It seemed weird that Brazil was attempting to play ice hockey, but they surely showed up ready to battle.

Their first time playing internationally definitely left a lot to desire. It didn’t help that most of the team had very little time on ice beforehand. In fact, most players made their debut at the tournament itself. But every team has to start somewhere. They played their very first game on the ice against Mexico on March 2nd, 2014, a game that they knew was going to be tough, especially since Mexico was using much of their World Championship roster.

Their next game was three days later, a game that was surely going to be more competitive against Argentina. They were close, with Daniel Baptista scoring twice late in the third and Jose Henrique Vasconcelos adding a third goal in a late game dash, but they couldn’t overcome their opponents in an eventual 5-3 loss.

And then they had the great honour of playing against Canada, made up of former minor pro and junior hockey players. Canada participated at the Pan-Am to help smaller countries develop by having their expertise in tournament planning and development make their way down south to Mexico. For Brazil, it was a great chance to see what the top ranked IIIHF nation was all about.

Brazil would lose to Colombia 14-0 in their final game of the tournament, a result that ultimately put them in dead last. But that was to be expected for a team that had never graduated from inline hockey beforehand. They set their sights on 2015, where they would hope for a better result under the guidance of coach Jens Hinderlie.

2015 saw what can only be considered to be their best effort yet. In the days leading up to the tournament, Hinderlie made sure to get the players as much ice time as possible. When playing against tournament powerhouse Mexico, and even the rising stars from Colombia, they would need a good effort to contend for a medal.

With no Canada, their odds were better than ever. On the opening day of the tournament, June 3rd, 2015, Brazil managed to beat a team of Mexican U17 hockey players by a score of 5-2, their first ever ice hockey victory. They followed that up with an impressive 7-0 victory against Argentina’s B squad, their first ever international shutout.

Things truly were looking really bright for Brazil. Their 3-0 loss to Colombia in the third game didn’t actually seem like that bad of a loss, especially since Colombia eventually went on to get the surprising gold medal. They’d win one more game before the tournament was over, a 6-1 victory over Argentina’s best team.

All of a sudden, Brazil had a bronze medal. They had just made ice hockey history with a bunch of people you’d never expect.

Brazil found themselves in the 2016 edition of the Pan-American Ice Hockey Games, this time winning just two games. Unlike in 2015, the tournament had a formal medal round format, with Brazil falling 2-0 to Mexico’s B team in the bronze medal game. It was still an effort worth congratulating, despite falling to Mexico’s second best squad. For Brazil, it showed tremendous growth from their first tournament, where embarrassment took over due to their lack of prior ice hockey skill.

The future looks bright for the team. They still continue to train with inline hockey, but they’re hoping for more on ice in the future. Hinderlie is looking into getting synthetic ice for training, and while it won’t make you eligible to play World Championship events, it is the step in the right direction for a team looking for every advantage they can get. They still play to play in the 2017 edition of the tournament, and with future funding from other sources and any success they have on the ice, the team will look to expand for the future.

We’re pulling for you, Brazil.