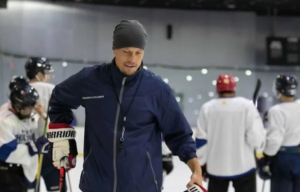 Juhani Ijäs of Finland has been formally installed as head coach and program director of the Philippine ice hockey team.

The Finnish coach was introduced on Saturday on the Hockey Philippines Facebook page and was shown skating at the Mall of Asia ice rink in an Instagram post on Wednesday.

“Juhani spent five successful years with the ice hockey program of Thailand and will now bring his vast experience to the Philippines,” Hockey Philippines added on its Instagram post.

Ijäs was previously the head coach of Thailand’s national team, which clinched the gold medal in the 2019 Southeast Asian Games held at the SM Mall of Asia ice skating rink. According to hockey statistics website Elite Prospects, he coached the Thais from 2017 to 2022 before being named to the Philippine national team.

The 37-year-old former ice hockey defenseman played in junior leagues in the United States, and professional leagues in Finland, the United Arab Emirates and Thailand.

He was also an assistant coach of the UAE’s national ice hockey team from 2011 to 2016.