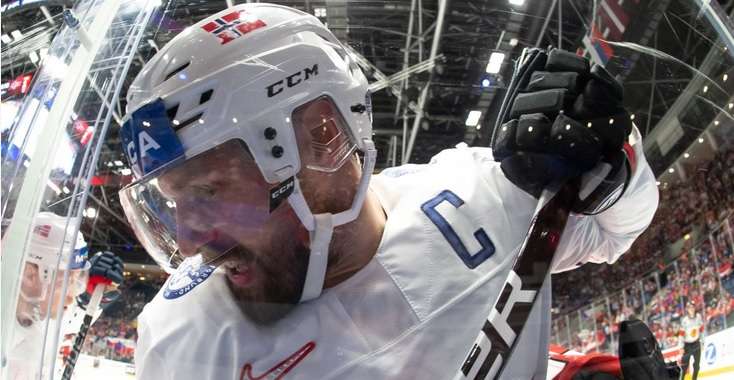 Norway’s Jonas Holos, who will play his 15th IIHF World Championship in Latvia, averaged 23:11 in ice time per game at the last Worlds in 2019

In hockey, you’ve got to stay in the moment and keep your eyes on the puck. Yet in the uncertain year of 2021, with the Beijing Olympics looming, you’ve also got to look toward the future. That reality will affect the shape of Norway’s IIHF World Championship squad in Latvia, with several key veterans opting to save their strength for the home-ice Olympic qualification tournament in late August.

The Norwegians, heading into their 15th consecutive top-level Worlds, haven’t cracked the quarter-finals since 2012, and they came 12th at the last tournament in 2019. That said, their eighth-place finish at the 2018 PyeongChang Olympics equalled their previous best from Sapporo 1972. If everything goes perfectly, another top-eight finish in Riga isn’t out of the question for coach Petter Thoresen’s troops, many of whom earn their living in Sweden or Germany. Let’s dig into how they might fare in Group B.

There could be a real battle for crease time among the three goalies returning from the 2019 Worlds.

Henrik Haukeland, who won the 2020 Gullpucken as the Norwegian Player of the Year, performed creditably as an SHL starter in 31 games with Farjestad BK (2.55 GAA, 91.0 save percentage). Meanwhile, Jonas Arntzen, who didn’t see the ice in Slovakia, has matured at age 23. Serving as 2013 Worlds gold medalist Jhonas Enroth’s backup with Orebro HK (2.87 GAA, 90.4 save percentage), Arntzen stepped in and made 30 saves in a 2-1 overtime win versus Leksands IF to complete a four-game quarter-final sweep.

You can’t count out Henrik Holm, who enjoyed the lion’s share of starts (five) at the last Worlds. The 30-year-old, a six-time champion with Stavanger Oilers, put up elite numbers (2.03 GAA, 92.5 save percentage) before the Norwegian season was officially cancelled in mid-March due to COVID-19 concerns.

Jonas Holos has anchored the Norwegian blue line like a tireless, indestructible cyborg for years. The 33-year-old national team captain, who wore an “A” with Linkoping HC for the second straight season, sits at 95 career Worlds games, and can join the 100-game club in his 15th Worlds. Among active players, Holos ranks second only to 37-year-old Swiss forward Andres Ambuhl (107 games played), who is set to tie countryman Mathias Seger’s all-time record for most tournaments (16).

Alexander Bonsaksen, a 34-year-old three-time Olympian who captains Liiga’s KooKoo, is out due to hip surgery. That will increase the demands on other veterans like Erlend Lesund (Rogle BK) and Johannes Johannesen (Dusseldorfer EG). Not overly physical as a group, the Norwegian D-men must rely on solid positional play and good first passes to avoid getting eaten up against Group B powerhouses such as Canada and Finland.

Alas, the biggest names aren’t coming. Mats Zuccarello, Norway’s all-time NHL points leader, is preparing for another playoff run with the Minnesota Wild, and Patrick Thoresen, whose 39 points as Storhamar’s captain topped the Norwegian scoring race, is resting up for the Olympic qualification. But that doesn’t mean Norway lacks hope.

Centre Mathis Olimb, still a nifty playmaker at age 35, led Wolfsburg Grizzlys with nine points in 10 games en route to the DEL final. His younger brother Ken Andre Olimb, with whom Mathis enjoys some Sedin-like chemistry, could be a difference-maker too in his first Worlds since 2018.

If Valerenga captain Tobias Lindstrom can repeat his 2019 team-leading performance (4+2=6), that would be a major plus. And watch out for the skill and speed of 21-year-old Mathis Emilio Pettersen, fresh off his AHL rookie campaign with the Stockton Heat, Calgary’s affiliate. The 21-year-old is healthy after struggling with injuries this season. Dubbed the “Norwegian Gretzky” for his YouTube moves as a preteen, Pettersen will be eager to make an impact in his Worlds debut.

Norwegian hockey is a tight-knit family, and head coach Petter Thoresen – Patrick Thoresen’s father and a five-time Olympian as a player – knows he must cultivate that family feeling for these underdogs to succeed. That’s especially true since Norway, with a limited player pool, continues to lean on its core of aging veterans.

The 59-year-old must manage his team’s morale and energy properly during back-to-back struggles against Finland and Canada (25 and 26 May). It’s about making sure they have enough left in the tank for host Latvia (28 May) and the also-winnable group finale against Kazakhstan (31 May). The Norwegians will likely do better 5-on-5 than on special teams, as their power play was ranked 12th (13.6 percent) and their PK 13th (69.5 percent) at the last Worlds.

This will be Thoresen’s fourth straight Worlds since taking over from longtime bench boss Roy Johansen. So far, his best result has been 2017’s 11th-place finish.

Let’s take a moment to dream. Despite not icing a star-studded roster, the Norwegians could potentially win four games in Group B. History is on their side.

They face Germany in their opener. They haven’t lost a Worlds game to the Germans since 2007, with wins of 3-2 in 2008, 12-4 in 2012, and 5-4 (shootout) in 2018. Norway also pushed Marco Sturm’s eventual Olympic silver medallists in a 2-1 shootout loss in group play in PyeongChang. Then, Game Two is versus Italy, whom Norway hasn’t lost to since 2001. Thoresen’s troops can go out and play pressure-free since there is no relegation in 2021. It all creates a fairly rosy picture.

Yet ultimately, the likelihood is that there’ll be a few slip-ups along the way, and the Norwegians will once again end up around their current position in the IIHF Men’s World Ranking (11th).