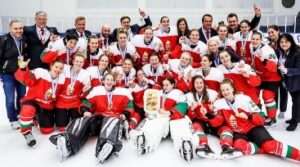 Host Hungary won the gold medals at the 2019 IIHF Ice Hockey Women’s World Championship Division I Group A in Budapest by only having one blemish on its record which was a shootout lose to Slovakia. They will be promoted together with second-ranked Denmark.

“This is a sweet taste since there was tremendous pressure on the team. We played against some hard opponents as we battled for promotion, this is a great feeling right now. We needed to play as a team and not rely on two or three key players,” said Hungary’s head coach Pat Cortina after the last game, a win against neighbour Austria.

Heading into the tournament there were no clear-cut favourites to win the group but it did make things easier that the top-two teams in the group were to move up to the top division with the new format and ten teams. Hungary and Denmark will replace Sweden and France for the 2020 IIHF Ice Hockey Women’s World Championship in Halifax, Canada.

Everyone knew that a loss would not eliminate the chances of promotion but make things harder. When asked just about what their expectation were for the tournament, almost every head coach said the same. That they will be taking the tournament one game at a time but they feel that they have a team that can earn promotion to play in Halifax next year.

Back to Budapest, the 2019 IIHF Ice Hockey Women’s World Championship Division I Group A started off with Denmark getting past Slovakia by the score of 3-1 thanks to a brace by Josephine Jakobsen. In the second game of the opening day Hungary just got past Norway 2-1 as Averi Nooren scored a goal and helped set up one as well. The opening day closed out with Austria cruising past Italy 4-1, Theresa Schafzahl closed out the match with two goals.

All six teams were back on the ice the following day, Denmark got past Italy 6-1 as all six goals were scored by someone different. Hungary hit a road bump as they lost to Slovakia 2-1 in sudden death shootout. Norway squeaked out a one goal win in a game that produced nine goals in total. After the second day the two Scandinavian countries were sitting at the top of the standings. 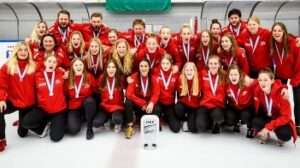 Silver makes happy if you earn promotion. Denmark will play at the top-level Women’s Worlds for only the second time after 1992