Ice hockey coach warms to the challenge of Olympics 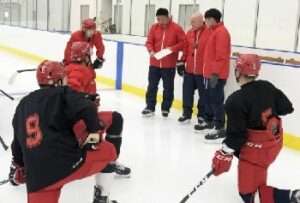 For coach Hu Jiang and China’s ice hockey players, the clock is ticking to the 2022 Beijing Winter Olympics.

He has often felt the weight of a nation in his selection and training of players for the event.

“Ice hockey is quickly growing in China, especially in terms of the number of players and the scale of tournaments. But it still takes time to close the gap with the superpowers in the game,” said Hu, who is also a deputy representing the Heilongjiang province at the National People’s Congress.

The International Ice Hockey Federation has granted China spots in the men’s and women’s section for 2022. China was ranked 33rd in the 2018 men’s world rankings.

Hu has just returned from a training camp in Finland with his players before attending the annual legislative session in March. “We are trying our best to meet the nation’s expectations for the upcoming Winter Olympics.”

The 43-year-old built his coaching reputation with Qiqihar, Heilongjiang province, where he grew up and received training as an ice hockey player.

He started playing the game when he was 10, and turned professional in 1992. “The training of professional teams has always been rigid, with the inevitable injuries and fatigue. But I never allowed any complacency,” he recalled.

He was first selected by the national team in 1997, and remained part of the national squad before retiring in 2008.

Hu attributed his success as a player to hard work during training and his natural fitness.

After his retirement, Hu became an assistant coach with Qiqihar’s men’s hockey team. He was appointed head coach in 2013.

He went on to guide the team to several national championships and trophies between 2013 and 2018.

His love for the game also empowered him to guide his son, Hu Wenhan, 14, to become an ice hockey player.

“To me, ice hockey is the best way to improve physical fitness and the team spirit of a child,” he said.

However, Hu can barely spare time to coach his son, who has been training under his own coaches.

The youth ice hockey friendly between China and Russia in June last year, a match that was watched by President Xi Jinping and Russian President Vladimir Putin, was the first time that Hu Wenhan played under his father as coach.

However, Hu insisted that the father-son relationship was not a factor that affected his team selection or tactical decisions on the ice rink during the game. “On the rink, I was the coach and he was only one of the players,” he said.

As a coach to the men’s national team, Hu has long been troubled by the shortage of homegrown talent. During the Asian Winter Games in Sapporo, Japan in 2017, he expressed his worries about the lack of top players available for selection after Team China was outscored 32-0 in its three games.

In order to truly catch up with the ice hockey giants in the world, the country should continue to focus on the fundamentals, he said. He noted that the deficiency of top players was not simply because of a lack of young players coming through.

Indeed, young players registering for the game surged to about 20,000 last year compared with a mere 300 players about 10 years ago, he said. In Harbin and Beijing, 200 primary schools have launched ice hockey teams, in which at least 6,000 pupils have participated.

“One problem is that children are giving up the sport as soon as they enter junior high schools as they begin to come under greater academic pressure. Meanwhile, there are barely any middle schools that are running ice hockey teams,” he said.

The lack of channels for young hockey players to progress through the academic system is another important reason, as few colleges in China grant scholarships to children playing the sport, he said.

He noted that a number of players for the Chinese men’s hockey team, such as Ying Rudi, Song Andong and Yan Juncheng, moved to North America for ice hockey training when they were about 10 years old.

Song Andong was the first Chinese-born player drafted into the National Hockey League. He was drafted in the sixth round, 172nd overall in the 2015 NHL Entry Draft by the New York Islanders.

“Going abroad was virtually their only choice if they were to continue to seek a career in ice hockey,” Hu said.

Cost is a factor, he said. There is the maintenance of ice hockey rinks, cost of gear, uniforms, equipment and coaching fees. “Many universities cannot afford the yearly investment of up to 3 million yuan ($447,000) each year.”

He called on education authorities to come up with concrete policies and a plan to support the development of ice hockey so that young players can have a way to get through college with ice hockey scholarships.

“The development of college games is the core part for the sustainable development of ice hockey. By having college hockey teams, we can also encourage the growth of teams at primary and middle school levels,” he said.

“That could be the best way for Chinese ice hockey to truly take off.”