Ice hockey teen duo hopes to do Singapore proud in 2017 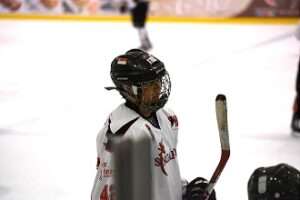 At the tender age of four, his mother took him to an ice rink in Singapore to dabble in figure skating.

After watching ice hockey players who also happened to be there, Singapore-born Richard O’Brien, who has American parentage, instead chose to master the stick and puck on ice.

Fast forward to 2016, and the 18-year-old is now a member of the national squad, training together with players who are mostly 10 years his senior.

“I’ve been playing in the national team for two years now. A lot of my friends are surprised that I play ice hockey, especially in Singapore,” said the Catholic Junior College science student.

Before he enlists for National Service after completing his A-Levels next year, O’Brien is hoping to help Team Singapore win a medal at the 2017 SEA Games in Kuala Lumpur, when the sport will make its debut appearance at the regional competition.

He said: “Next year will be quite tough to balance everything, since the SEA Games will be held right around when the prelim (exams) will be.

“Our training sessions are quite late at night, so I use most of the day to complete my school work and do my studying. It’s been okay so far.”

The elevation of ice hockey to a SEA Games event comes at a time when there is growing interest in the sport in Singapore, although most players are foreigners.

Drop by any ice hockey league game at JCube on Monday, Thursday and Sunday nights, and one would notice a majority of American and European expatriates playing the sport. But as O’Brien observed, more Singaporeans are beginning to take it up.

He said: “Currently, I would say that the sport caters to a lot of expats, but there’s been a much larger increase in the number of Singaporean players playing the sport from the time I started venturing into ice hockey.”

He added: “(Back then), there were very few Singaporeans playing and most were of mixed-parentage like I was, with parents who were from overseas and played ice hockey as a child. Now though, there are a lot more Singaporeans who are joining and taking up this sport.”

Having a diverse membership in the national team is an experience in itself for O’Brien, with players of various ages and backgrounds coming together to form the national team: “It’s a very lively locker room. There’s a lot of Singlish and Hokkien being spoken, which makes for an interesting mix.”

He added: “Initially when I joined, I felt like the little kid in the national squad, but I feel like I’ve earned my place in the team. I definitely still feel like one of the younger players, but I think I’ve earned the respect of my team, especially since I’ve been with the squad for two years now.”

USING SPEED TO MAKE UP FOR LACK OF SIZE

Just like O’Brien, team-mate Ryan Tan is also preparing for his A-Levels. At 17, the Raffles Institution student is the youngest member of the ice hockey national team.

Although he does not possess O’Brien’s height, what Tan lacks in physicality, he makes up for with guile: “One of my assets is speed. Being light, I’m slightly faster but I also have a disadvantage when it comes to size and experience. That’s where we help each other out on the ice.” 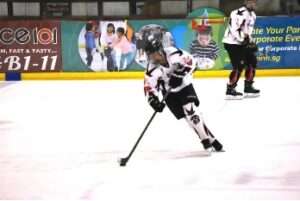 As the youngest member of the team, forward Ryan Tan (#68) aims to utilise his speed

“Being smaller may be a disadvantage, but it also means I can squeeze out of a situation more easily. Also, being aggressive isn’t just about physicality but it’s also a mental trait as well which makes me do well in international games,” he added.

Noting how ice hockey is an extremely fast-paced team sport, Tan said that it is not enough to be good at a single skill in order to be a useful member of the team: “The sport is very dynamic as you need a combination of attributes, and not just speed or size.”

Developing new talent is essential for the growth of ice hockey in Singapore, according to Singapore Ice Hockey Association (SIHA) president Alphonsus Jude Joseph, and introducing younger players like O’Brien and Tan to the national set-up will help achieve that.

Joseph, who also plays for the national side, said that both teens are key to the future of Team Singapore: “Both of them will be the main building blocks for the national squad. They’ve got a good 10 to 15 more years ahead of them, in terms of playing international games.

“(Having them in the squad) is all part of bringing in the next generation into the national team. It gives them the clearance to play in high-level competitions from young and be able to lead the (other) youth players once they grow older.”

Despite the physical and technical demands of the sport, O’Brien insists that ice hockey does not solely rely on the stamina and pace of its younger players, and appeals to a wide cross-section of people.

He said: “I wouldn’t say (ice hockey) suits younger or older players more. It’s just the kind of player you are – if you’re the kind that enjoys fast-paced action, then this is what will suit you. It’s also more about having the kind of stamina where you’ll have to make constant short bursts, like for example in a 400m runner. That’s probably the closest equivalent to the kind of stamina you’d want to have.”

SIHA’s head of coaching development, Kevin Tan, hopes the teen duo will inspire more youths to take up ice hockey in Singapore: “The current senior squad grew up playing together, and are now starting their own families and advancing in their respective careers outside the sport.”

He added that the sport is at a transitional phase of grooming players (like O’Brien and Tan) to take over from the present batch. “(Hopefully), they can be role models for our youth to pick up the sport, and someday represent Singapore on the international stage.”