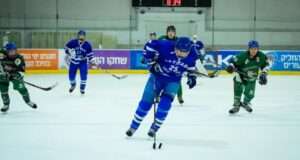 An Israeli hockey league game at the rink in Holon, near Tel Aviv. (Facebook)

Most just saw a tiny rink but Shindman had a vision.

Ice hockey in a Mediterranean climate? Most people would throw up their hands and head to the beach. Not Paul Shindman. The Canadian ex-pat who made aliyah, or immigrated, to Israel in 1987, may have left behind his home country but not his love of hockey.

Shindman was inspired in the late 1980s by Israel’s first ice skating rink in Kiryat Motzkin. Most just saw a tiny rink but Shindman had a vision.

He got a job working for rink owner Asher Farkas, helping build the second, bigger rink in Bat Yam that featured a floor cleaner converted to serve as a Zamboni. His initiative to collect hockey equipment and start a league got a boost thanks to a group of Canadian soldiers stationed in Israel at the time.

One can say Shindman’s dream came true. Ice hockey is flourishing in Israel. The country is a member of the International Ice Hockey Federation (IIHF), and the sport is considered to be one of the most popular during the Maccabiah Games.

“The ice rink [in Kiryat Motzkin] wasn’t huge. It felt about the size of a big living room and dining room combined. But it was a rectangular shape with round corners, and you could play hockey on it. We started playing three-on-three, and I started collecting equipment. I asked people to bring donations, like pads, sticks, when they came to visit Israel. 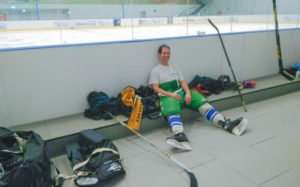 “By the end of 1988, I had enough equipment. I started recruiting guys, mostly by word of mouth. I put an ad in the Association of Americans and Canadians in Israel monthly newsletter, and I found a couple of guys that way. We started a four-team league.

“In 1989, we had the first experimental season in Bat Yam, with four teams – Jerusalem, Netanya, Bat Yam and Haifa. They played a double-round round-robin. The first game would finish and the guys would take off the equipment to give it to the guys for the next game.

“It was on a dinky rink. What happened was, the rink owners hired me because I’m great at mechanical engineering. I’m a hockey player and coach, so I was going to be their adviser. But they surrounded the rink with plate glass windows. After we shattered two of them, they decided to get sheets of plexiglass with little grommet holes. Before every game, we’d go around and hang these sheets of plexiglass to protect them from getting shattered.

“At the time, I was in touch with the International Ice Hockey Federation and the International Skating Union because we started a nonprofit, originally called the Israel Ice Hockey and Figure Skating Association. There were less than 100 athletes. We registered, and I turned to the IIHF and they said the qualifications to join the IIHF are, ‘You need a full-size rink and an official recognition from your national Olympic committee that you are the representative body for the sport.’

“I turned to the Olympic committee, and they basically laughed and said don’t waste our time. The major event that really got us started was when I got a call from the liaison person who was handling the rest and relaxation for the Canadian Peacekeeping troops. Canada, at the time, had a couple of hundred peacekeepers in the Golan Heights. They heard there was ice in Israel, so they had equipment sent over. They wanted to have an exhibition game, which was in February 1990.

“We got blue and white hockey sweaters made, and we had Team Israel versus Team Canada. I invited the mayor of Bat Yam, the general manager of the Israel Olympic Committee, who knew the mayor, and we invited the ambassador of Canada to do the official puck drop. This tiny rink was packed with 200 to 300 people.”

“The entire staff of the Canadian Embassy came out to cheer. We did the whole shebang with national anthems, gift exchange and the like, and the Canadians clobbered us, 20-2. It was bizarre, but the Israel Olympic Committee saw we were for real, gave us a letter and I turned back to the IIHF and, in 1991, Israel became a member.”

What’s been the biggest challenge for ice hockey in Israel since then?

“The biggest challenge for many years was there wasn’t enough ice. All of the rinks in the center of the country were tiny. There were about 10 different rinks that opened and closed.

“The Olympic rink opened in 1994 in Metulla on the Lebanese border, and that story is a book in itself. So, to play full hockey, you had to go to Metulla, which is about a three hour drive from the center of the country.

“About seven years ago, an Israeli entrepreneur built a large rink in Holon, which is just outside of Tel Aviv. You can play four-on-four full-rink hockey with blue lines. It’s a shortish, narrowish rink, about two-thirds the size of a full rink. But you can have real games. Suddenly, Metulla became second fiddle. You’d go up once a month to Metulla, but you played all of your hockey in Holon.

“Pavel Levin, father of ice hockey player David Levin, is a roller hockey coach. He got investors and built an NHL-size rink in the moshav called Tnuvot, which opened last year near Netanya. Now, you can have a certified international tournaments near Tel Aviv. Israel now has two full-sized rinks and three you can play hockey. There’s a national senior league, junior league, kids leagues, non-contact leagues and several thousand people are playing hockey. What’s amazing is that Arab countries play hockey, too, mostly in the Gulf states.”

You hear about sports bringing Arabs and Jews together. How is that happening with ice hockey?

“There are some Israeli Arabs who play up north in Metulla. But the rinks aren’t near any Arab population centers. Arabs in Israel play a lot of roller hockey, but there hasn’t been a big move to get them on the ice yet. That really needs a hockey, Zionist philanthropic boost from somebody who can get them involved. There is interest. The big breakthrough, I think, is signing the peace treaty with the United Arab Emirates. They will hopefully get the OK to play ice hockey against Israel.

The UAE, Kuwait and the other Arab countries refuse to play Israel, and the IIHF understands that. Israel is grouped in Europe and the Gulf States are grouped in Asia. Now that there will be direct flights and full diplomatic relations, there’s no reason that the UAE can’t play games against Israel.”

What would that mean for you to see that happen for Team Israel?

You saw that with judo just a year ago with Sagi Muki.

“Judo is the prime example. It happens in other sports as well, including hockey, but at a low-key level. The international organization realizes the political reality and doesn’t group Arabs with Israel. Now with the UAE peace deal, there’s no reason not to. We’ll have to see where that goes.”

What’s the goal for hockey in Israel?

“My goal was to – I lived the Canadian-Jewish-Zionist dream – I made aliyah and played hockey in Israel. It doesn’t get better than that. We’re there. We’ve made it.”

Is there a potential to pursue an Olympic run?

“No, Israel is too small. The countries that make the Olympics have a bigger population, a much more northern location and a lot more resources than we do. We only have a few thousand people playing hockey with a few rinks. You can’t go out in the winter and skate in your backyard. You don’t get that ice time.

“There’s an Israeli kid, David Levin, when he was 12 years old, told his parents he wanted to move to Toronto to live with his aunt and uncle in order to play hockey. He moved to Canada and grew up playing there, becoming a top junior player and getting tryouts with a couple of NHL teams, but moving there was one of the reasons why he could make it.

“Israel in the Jewish Olympics? Yes. Ice hockey is already a Maccabiah sport… For the hockey final at the Maccabiah games in 2017, four Jewish NHL owners donated a rink to the City of Jerusalem. They set it up in the basketball arena Hapoel Jerusalem plays in. It was basically NHL size. They advertised the final, which was Canada versus USA. Six thousand people showed up to the final. Wayne Gretzky sent in a video greeting that they put on the scoreboard in between periods. It was the biggest event at the entire Maccabiah besides the opening ceremonies.”