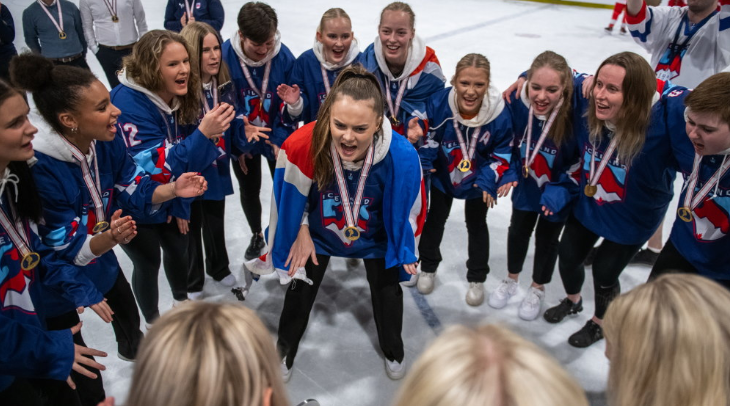 The Icelandic players celebrate with their gold medals and trophy after winning the 2022 IIHF Ice Hockey Women’s World Championship Division II Group B in a nailbiter of a game against Australia.

Iceland kept a cool head to win gold by the tiniest of margins at the 2022 IIHF Ice Hockey Women´s World Championship Division II Group B in Zagreb, Croatia.

Team captain Silvia Bjorgvinsdottir led by example by scoring the shootout winner to give Iceland a 2-1 victory over Australia. Her coolly dispatched backhand high past Australia’s netminder Olivia Last seals top spot for the Scandinavians. The Icelandic team captain was the sole skater to convert in a nailbiter of a shootout contest lasting six rounds.

“We have been working so hard for the past three or four years for this moment. I am so proud of all the girls on the team, and I think that we deserved it this year,” said the 22-year-old following an afternoon of high drama inside Zagreb’s Velesajam Ice Rink.

A vital cog in the Icelanders’ memorable promotion success was also netminder Birta Helgudottir, who kept all of Australia’s half-a-dozen penalty shots out of her net. Helgudottir and Silvia Bjorgvinsdottir were selected as the tournament’s best goalkeeper and forward respectively by the Directorate.

“It was a very important win for us in a game where the difference between the teams was small in details but huge by going up a division. Everyone contributed as we rolled four lines for most of the game so for me the win came from a team effort,” said Iceland head coach Jon Gislason.

“Our focus was to grow fast as the tournament went on and save the best for last and that worked out for us this time. I felt we improved our puck game throughout the tournament and we had to work hard for any possession against a strong forechecking Australian team that I feel belongs in the group above. But I think we do as well and ahead of next year with good preparation I believe we can play good games and compete for a win against any team in Division IIA,” he said.

The win sees Iceland promote to skate at the 2023 IIHF Ice Hockey Women’s World Championship Division II Group A. It also marks the highest overall position Iceland’s women’s national team has been at since entering World Championship play in 2005.

“Huge compliments to our girls who have worked very hard for this for many years and also to all our former players who have made this all possible. Our new generation of players are bringing new skills to our program while our veteran players guide them well and share their experience to take this team to new levels,” said Gislason, who as a player himself was an influential member of the Icelandic men’s national team, who back then punched well above their weight.

In Zagreb, Iceland had gotten the tournament underway by scoring double-digits in a 10-1 win against South Africa. A tougher nut to crack came against eventual bronze-medallists Turkey in game two as Sunna Bjorgvinsdottir scored the winner early in the third period in a 3-2 victory. An 11-1 blowout against Croatia then set them up in a winner-takes-it-all game for gold against Australia on the final day.

In a see-saw battle in Velesajam Ice rink, Australia started the brightest, but as the period wore on Iceland worked themselves into the game, winning the shots 10-6 during a goalless first frame.

Despite being outshot the Scandinavians broke the deadlock with 2:23 left of the second period. From her position along the boards Silvia Bjorgvinsdottir picked out Teresa Snorradottir whose shot from the point was saved by Last before Sunna Bjorgvinsdottir reacted quickest on the rebound to score Iceland’s opener.

Australia’s men’s team had withdrawn from World Championship play contested last month at this very same venue. With the women’s team now being able to return to the world stage as first team from Down Under in two years, the “Mighty Jills” were eager to make up for lost time.

They were level at 7:31 of the third peirod. Iceland’s Sunna Bjorgvinsdottir failed to control the puck in her defensive zone, it was snapped up by the lighting quick Kristelle van der Wolf. From her position in the slot between the two face-off circles, she unleashed a wrister between the pads of Helgudottir to tie things up.

With the game appearing now appearing to tilt over into Australia’s favour, 60 minutes of regular time were unable to separate the two evenly matched teams. With overtime and three-on-three taking over, it appeared to suit the pacy Australians better. They outshot Iceland 7-2 but failed to find a way to get the puck behind Helgudottir in the Icelandic net.

“I felt our speed and skating ability was a little bit better than theirs. However, they were able to skate with us during that time and outmuscle us during the 3-on-3. Even though we had a lot of the play at their end, we had a few high scoring chances but we were just unable to put the puck into the back of the net,” said Australia’s head coach Stuart Philps.

Throughout the tournament, Last of Finland’s RoKi Rovaniemi played 125 minutes and conceded just one goal for Australia. She shared goaltending duties with 33-year-old Tina Girdler of the Sydney Sirens, who did not concede a single goal in 120 minutes of play. Rylie Ellis also stood out for Australia being voted the best defender by the Directorate. Going forward they found the net with ease scoring 38 goals while conceding only twice in four games.

“A shootout is not a good way to win or lose a tournament. But that’s the way it is, which we have to accept. The performance of the Australian team has been outstanding. For a team brought together with short notice and to only concede one goal in regulation time in the entire tournament is a credit to our players and goaltenders,” said Philps.