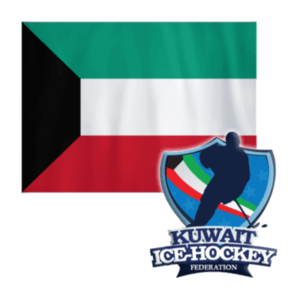 Having already crisscrossed through snow and sand, the humidity of Southeast Asia now awaits Kuwait in a milestone of a season.

Entering the final straight of a hectic second half of the 2017/18 season, sees the Gulf nation compete at the top division of the 2018 IIHF Ice Hockey Challenge Cup of Asia in Manila, Philippines. Contested between 3-8 April with Mongolia, Thailand, Singapore and hosts Philippines awaiting, the challenge comes in the wake of another significant first for Kuwait.

Barely a month has passed since taking the plunge and competing at the 2018 IIHF Ice Hockey World Championship Division III Qualification. Debuting in wintry Sarajevo saw Kuwait suffer consecutive reversals against hosts Bosnia & Herzegovina, eventual runaway winner Turkmenistan before closing things off with a tight encounter against their regional rivals United Arab Emirates. Despite three straight defeats, it was to be one giant leap for Kuwaiti hockey.

“It was a big level, but it was a huge step for Kuwait to be there,” said Kuwait’s assistant coach Bojan Zidarevic on moving up to the World Championship qualification stage. “But for each game, we are learning more and our goal is set for the next Asian Winter Games. Last year it was held in Sapporo and now we have four years to prepare our young kids for that tournament,” he continued.

Zidarevic, a former World Championship player for Serbia, arrived in Kuwait three-and-a-half years ago. Apart from working with the senior national team, he is also developing teams from U15 to U10 level while also still playing for Kuwait Stars.

Being upended 1-44 against the might of Japan at the Asian Winter Games, Kuwait got a harsh introduction to international hockey back in January 1999. Followed by years of small but consistent steps forward, a considerable change took place when hosting the 2015 IIHF Ice Hockey Challenge Cup of Asia Division I. With hockey being showcased on in Kuwait City, three straight wins against India, Oman and Macau increased efforts almost overnight.

“Winning that tournament changed everything. We got good points from the IIHF and we started our development program,” said Zidarevic as Kuwait then continued their winning streak on home ice by retaining top spot at the 2017 IIHF Ice Hockey Challenge Cup of Asia Division I in Kuwait City.

“We now have 160 kids, starting from the age of four to 15 all fully equipped. We now hope our U20 national team will soon play in international tournaments and we also have our women’s national team who are looking to play at the Challenge Cup of Asia,” said Zidarevic on the burgeoning interest for hockey in a country with a population of just over four million.

With interest spreading down the ages, the most pressing challenge facing Kuwaiti hockey is now to try and channel the youth into an aging senior national team.

“I have played for 25 years and many of those as the goalie for the national team. I’ve had to operate my shoulder, twice I had surgery on my right knee, another one of the left knee, so my body is collapsing,” said Jasem Al Sarraf, who played through the pain barrier as the first-choice goaltender clocking up 154:43 minutes in three games at the recent World Championship Division III Qualification in Sarajevo.

“We are changing many things at the moment. I am 40 and we have another six to eight other players finishing this year as we are 40 or older. There is a new team coming from juniors, so this year is going to be tough for us as we are changing everything. We need to give the youth more experience and leave them on the right path,” he continued.

Well aware of his playing days now entering its twilight days, Al Sarraf will cherish many memories from a career encompassing quarter of a century. One such took place during Kuwait’s regular visits for training camps in Sweden, where the unexpected presence of his hero gave the whole Kuwait team a lift in their preparations ahead of the 2015 IIHF Challenge Cup of Asia.

“We met Nicklas Lidstrom twice that year when we were in Hallstahammar in Sweden. First, he came to see us as he had heard about us and wanted to show his support. The second time we played against a team of his son and he was happy to see us moving up a level since he first saw us,” said Al Sarraf who was touched by the humility shown by one of the all-time greats representing Sweden and Detroit Red Wings.

“It was just like a dream. You have watched NHL on television, you are a fan of Red Wings and then you get to meet him. He was very happy to see us, so it was great to know that we have him to support us,” said Al Sarraf.

Despite now being on the verge of hanging up his skates at the national team level, Al Sarraf is set to continue playing in the domestic championship while sharing his know-how to the next generation of athletes. Relishing a challenge, Al Sarraf’s involvement will also include developing a wide range of winter sports such as speed- and figure skating, curling, and skiing, all eager to follow in the footsteps of the recent success of hockey.

“It is a country of sand and it is plus 50 degrees Celsius, but when it comes to hockey we have good management, a nice arena with two ice surfaces and players turning up for practice. In the end, our hard work will bring good results and I believe we have a good plan for the future,” said an optimistic Zidarevic.