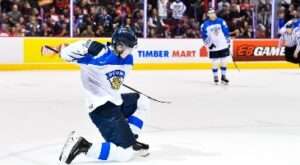 The Finns will come to the 2020 IIHF World Junior Championship in the Czech Republic as the defending champions after last year’s triumph in Canada. Finland has been the most successful team in the U20 competition in recent years with three gold medals in the last six years. Can they repeat on Trinec and Ostrava ice?

“The strengths of the Finnish junior team are speed, commitment, dynamics, great skating and, especially, the Finnish work ethic and team cohesion,” said Petr Hubacek. The 44-year-old former forward, who spent a total of five seasons with JYP Jyvaskyla where he won a Finnish Liiga title in 2012, will be the ambassador of the Finnish team at this World Junior Championship.

In the hockey world, the Finns are known above all for their hard work and team cohesion. “It was exactly these aspects, which I mentioned, on which the Finnish national men’s team at this year’s World Championship in Slovakia was built. That’s how they had success,” said Hubacek.

Finland has played continuously at the top division of the World Junior Championships since 1977. The Finns have been the third-most successful team at the event with five gold medals. Their first title came in Czechoslovakia in 1987 – however, their first-place finish that year was significantly affected by the bench-clearing brawl between Canada and the USSR, which resulted in the disqualification of both teams.

How does it feel to win the World Junior Championship at home? Ask the Finns, who have triumphed twice in Helsinki in 1998 and 2016. The gold medal captured last year in Vancouver was Finland’s third in the last six years – more than any other country in that time.

The Finns are the reigning World Junior Champions, capturing the title with a victory last January at Rogers Arena in Vancouver. Jussi Ahokas’s team went through the group stage with a 2-2 record to place third, forcing them to meet host Canada in the quarter-finals. On the verge of being eliminated, Aleksi Heponiemi tied the game in the last minute of the third period and Toni Utunen scored in overtime to send the Finns to the semis.

The youngsters from the Land of a Thousand Lakes then easily handled Switzerland to set up a match-up against the USA with the title on the line. Dramatically, Kaapo Kakko scored the winning goal with 1:26 remaining to secure a 3-2 win for the Finns. Goaltender Ukko-Pekka Luukkonen was a big reason for Finland’s victory, and he was named to the tournament all-star team.

When talking about junior-aged Finnish hockey players, there’s only one place to start. “Every fan knows one name – Kaapo Kakko – thanks to the World Championship in Slovakia. The kid scored 22 goals in the Finnish league last season – the overwhelming majority of them when he was still just 17,” Petr Hubacek said about the current New York Rangers right winger. And because he’s now in the NHL, it remains to be seen whether or not Kakko will play at this year’s World Juniors.

As for other stars of the Finnish team, Hubacek mentioned Ville Heinola, who has already signed a professional contract with the Winnipeg Jets. He called the 18-year-old returnee: “A great, playmaking defenceman who likes to handle the puck.” Last year in Canada, Heinola contributed to his team’s title with one goal and one assist. At the upcoming tournament, he should be given a leadership role from coach Raimo Helminen.

The ambassador of the Finnish team also encourages fans to follow Rasmus Kupari, a draft pick of the Los Angeles Kings who is currently gaining experience in the AHL. “Another Karpat Oulu product,” Hubacek said of the creative centre. “He is said to be a combination of Sebastian Aho and Jesse Puljujarvi.”

The fourth name mentioned by Hubacek is Anttoni Honka, who plays in the Liiga for JYP Jyvaskyla, where Hubacek spent many years. A creative defenceman and excellent skater, Honka is now in his third season in Finland’s highest league and is a core member of JYP’s defence. “He’s an offensive d-man who likes to make plays and handle the puck,” the Finnish ambassador added.

But while he extols the virtues of so many potential members of the team, Hubacek reminds us that the Finns are firm believers in playing a team game. “I think the Finns generally produce a lot of good hockey players and it really pays to come and see them,” he says. “But not only the individual players, rather the whole team.”

The coach of the team is Finnish hockey legend Raimo Helminen. The 55-year-old was inducted into the IIHF Hall of Fame in 2012 and played 331 games for the Finnish national team between 1983 and 2002. He took part in six Olympic Games and 11 World Championships and holds the record for the most games played at the international level. Along with fellow Finn Teemu Selänne, he has played in the highest number of Olympic tournaments.

“It’s a great opportunity. It’s great to work with young players. In this age category, hockey is very fast and fresh. I am honoured to be part of this journey,” Helminen said in January about his new position. He will be assisted by Tommi Miettinen, Erik Hamalainen, Ari Moisanen and Jukka Varmanen.