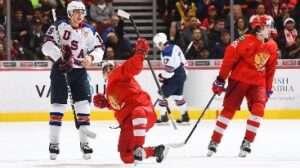 Grigori Denisenko will be one of the star players on the Russian team at the 2020 IIHF World Junior Championship.

Russia’s national junior team has entered virtually every IIHF World Junior Championship as one of the medal favourites. Combined with their totals from the Soviet Union, their total of 36 medals is more than any other nation, and their 13 gold medals is second only to Canada. Amazingly, they have never gone two seasons in a row without a medal, and the bronze claimed last year in Vancouver assures that streak will continue. However, the Russians enter year’s tournament having not struck gold in eight straight tournaments – their longest ever drought. Can they return to the top of the podium this year?

Three years with Lokomotiv Yaroslavl and one year with Atlant Mytishi. In those four years contained many highlights in the ongoing career of the 38-year-old Irgl. Russia isn’t only a place for him to play hockey but it’s now part of his family, as his second wife Irina Pavlina comes from there. As for the World Juniors, Irgl was part of the Czech team that won the gold medal in 2000. For those reasons, he was the Organizing Committee’s obvious choice to be ambassador of the Russian team.

“The Russians will undoubtedly bring a great team and be a favourite for a medal,” Irgl says. The product of the Vitkovice Ostrava club, who now plays for HC Olomouc, will also promote the championship in Russia, where his reputation among local fans is still high. Counting his three seasons with Dynamo Minsk, he played in KHL for seven straight seasons.

What makes Russian hockey so special? “Let me give you an example. When I saw the dry-land training in Russia, I was very impressed. Every exercise was aimed at working their legs and hands together,” said the silver medallist from the 2006 World Championship. “That’s what makes hockey players in individuality skilled as the Russians are able to be. If you can combine the work of the legs and hands in today’s hockey – that is, two things at once – you’ve won.”

Russia will compete in Group B in Ostrava along with Canada, the USA, Germany and the Czech Republic.

Today’s hockey in Russia follows on the legacy of the legendary Soviet machine. Even in the junior category, the Soviets were dominant. A tough military education from an early age was a necessity because the junior program was the hatchery for future championships of the USSR men’s national team.

The Soviets dominated the early unofficial years of the tournament (1974, 1975 and 1976) and then the first four official World Junior Championships, when the team featured future hockey legends such as defencemen Vyacheslav Fetisov and Alexei Kasatonov and forwards Vladimir Krutov, Igor Larionov and Sergei Makarov. The first blotches on their record came in 1981 and 1982, when the Soviets placed behind first Sweden and then Canada. Nevertheless, by 1992, they had received nine more medals, including five golds. In 1987, the whole team was disqualified after the famous “Piestany punch-up” with the Canadians and all players from both teams were barred from international play for six months.

In the later years of the Soviet Union, Pavel Bure – nicknamed the “Russian Racket” – launched onto the world scene by scoring more goals in the World Juniors than anybody before or since. The future star of the Vancouver Canucks and Florida Panthers managed to score an impressive 27 goals in the 1989, 1990 and 1991 tournaments combined.

After the collapse of the Soviet Union, successor Russia didn’t win another World Junior Championship until 1999, when a team built around Maxim Afinogenov beat host Canada in overtime. That was followed by two more golds in 2002 and 2003. Members of the latter championship team included Alexander Ovechkin and Yevgeni Artyukhin. Ovechkin would go on to score 18 goals over three years.

The most recent Russian triumph came in Buffalo 2011, when a team including Dmitri Orlov, Yevgeni Kuznetsov and Artemi Panarin helped overcome a 3-0 deficit in the final to win 5-3. Russia took medals from each of the six following tournaments but none of them were gold. Then in 2018, the Russians couldn’t get past the quarter-finals and finished fifth.

Following their disappointing 2018 tournament, Russia was not particularly favoured in 2019. From the view of many NHL scouts, the MHL and VHL are less adept at developing young talent than in Sweden or Finland. Nonetheless, the Russians topped their group in Vancouver, beating Denmark, the Czech Republic, Switzerland and Canada in succession.

The Russians continued their strong play in the quarter-finals, beating Slovakia convincingly. In the semi-finals, however, they lost a tight battle with the USA. The line-up around Alexander Romanov, Grigori Denisenko and goaltender Pyotr Kochetkov had to settle for bronze, following another win over the Swiss.

Which of the Russians are worth watching? “Definitely Denisenko and Podkolzin,” says Irgl. What makes them so exceptional?

19-year-old winger Grigori Denisenko is one of the greatest jewels of the Russian youth program. The product of the Lokomotiv Yaroslavl program is considered one of the future stars of the senior men’s team. “He is very skilled; extremely good with the puck,” says Irgl. Last year, Denisenko was drafted 15th overall by Florida, but in the last year’s World Junior Championship, he exceeded all expectations to top the tournament in scoring. In Ostrava and Trinec, he should be one of the leaders of the team.

18-year-old forward Vasili Podkolzin is another of a number of talented Russian bombers. Scouts admire his incredible complexity. “He’s a hockey player on a level who has all the tools. I think he’s going to have a great career,” Irgl believes. This year, Podkolzin was picked 10th overall by Vancouver, but for the time being he remains with SKA St. Petersburg, where he plays in KHL, VHL and MHL games. The captain of this year’s Russian U18 team already appeared at last year’s World Juniors, and that experience should prove valuable this year.

The Russian pilot is the extremely experienced, 63-year-old Valeri Bragin – an old-school practitioner who began coaching Spartak Moscow, and for a short time he was the head coach of CSKA Moscow. Otherwise, he has worked within the Russian Ice Hockey Federation. He was head coach of the 2011 IIHF World Junior Championship gold-medal team and since then, claimed three silvers and two bronzes for the Russian juniors. As well, he was coach of the Russian team that won gold at the 2004 U18 World Championship.