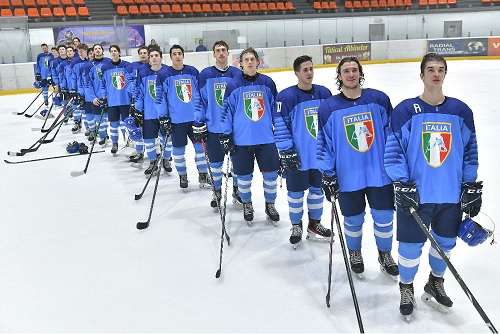 The Italian players during the national anthem after the deciding win against Korea for first place in the 2022 IIHF Ice Hockey U20 World Championship Division II Group B.

Getting off to a flyer and never looking back, Italy needed only four games to secure a top-place finish at the 2022 IIHF Ice Hockey U20 World Championship Division II Group A in Brasov, Romania.

Securing promotion in emphatic style, Italy took maximum points from its first four games to open up an unassailable advantage over the rest of the chasing pack ahead of Sunday’s concluding game against Great Britain.

Italy’s gold medal triumph was confirmed while lounging in the stands of Brasov’s Olympic Ice Hall. They had looked on as their only remaining contender for the top spot, Great Britain, suffered a second-period meltdown as Romania hit four unanswered goals to record a memorable 4-3 victory.

Competing at the 2023 IIHF Ice Hockey U20 World Championship Division I Group B, Italy will be able to call up 10 players from their gold medal-winning roster from Brasov to skate at the higher level next year.

Thomas Galimberti led in scoring for the Italians tallying 4+2 points in four games. He was closely followed by 17-year-old debutant Tommy Purdeller of the Red Bull Hockey Academy from Austria, who notched a couple of goals and three helpers. But Italy’s recipe for success was not down to individual efforts, but to a team full of attacking options. Head coach Giorgio de Bettin witnessed 12 different players net Italy’s 19 goals en route to winning promotion.

While the Italians enjoyed versatility going forward, they were rock solid at the opposite end. 71:07 minutes of play was required before conceding their first goal in Brasov. Carlo Muraro and Damian Clara shared goaltending duties with almost identical save percentages. With Italy only conceding four goals in as many games, their two goaltenders both enjoyed two wins and a shutout each with a GAA of 0.50. 16-year-old goalie prospect Clara enjoyed a shutout at his U20 Worlds debut for Italy and still has three more years left to shine at this level. Clara wrote history earlier this year by being named to the World Championship roster of the senior national team at his young age.

As Italy celebrates gold, the surprise package of the tournament was undoubtedly newly promoted Korea. They showed few signs of any jet lag seeing off Romania 4-1 in their opener. Woojae Kim’s team followed it up by edging Spain 2-1 in overtime, before rallying back from a two-goal deficit to beat Great Britain 5-4 after penalty shots. In the end, it wasn’t enough to deny Italy, though, when the two teams clashed in a key game between the two only undefeated teams on Friday night.

An interference penalty against Johannes Gschnitzer gave Korea the first power play of the game, which they took full advantage of as Heegon Jang converted at 11:24. But with 20 seconds left of the first frame, Italy was level. Leonhard Ludwig Hasler and Purdeller combined for Jakob Prast to tie the game at one apiece.

16 out of 22 Italian players on their roster skate in their home country. One of those, Hasler currently on loan at Sterzing-Vipiteno in the AlpsHL, enjoyed a particularly fine afternoon against Korea. He provided his second assist of the game as Enrico Larcher put Italy ahead at 8:40 of the middle frame. With Korea’s Minjae Park sitting out a holding minor, Hasler himself converted on the powerplay at 13:35 to stretch the lead to 3-1.

Italy powered on in the third frame. At 2:28, the red-hot Hasler notched his fourth point when providing the assist for Marco Zanetti to hit home 4-1. With the Koreans chasing a goal and running out of steam, Galimberti, who plays his hockey at Pelicans Lahti’s U20 team in Finland, closed the scoring for Italy on the powerplay with 1:27 left to record a fine 5-1 win.

The event was played in Brasov’s Olympic Ice Rink, a venue named at a time when the Transylvanian city hosted the European Youth Olympic Festival (EYOF) in 2013. Then future NHL stars such as Finland’s Sebastian Aho and Kevin Fiala of Switzerland both skated in Brasov at the EYOF hockey tournament. Perhaps a new generation of future Italian stars now saw the light at the very same venue hosting the U20 Division IIA tournament almost nine years later.

Earlier in the tournament, Italy had ruthlessly blanked both Lithuania and Romania 7-0 and 5-0 respectively in their opening two games. The Azzurri then rallied back from a goal down to edge Spain 2-1 during game three, with Italy’s top scorer Galimberti netting Italy’s winner midway through the contest.

The competition concludes Sunday, and there’s still plenty to play for during the final round of games. Korea and Great Britain, level on points are both in contention for silver or bronze. At the bottom end of the table, Romania, Lithuania and Spain will all be fighting to avoid relegation to Division IIB.