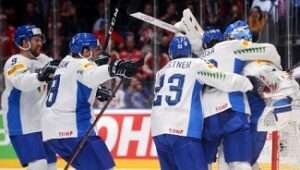 In a battle between the two bottom teams from Group B at the ice hockey worlds, Italy upset Austria 4-3 in a shootout on Monday and relegated their opponents from the elite category.

Italy’s first and only win in the group means they will stay in the top pool for next season. Austria is leaving for Division 1 after three years.

Italy was the first to strike after Anthony Bardaro’s highlight move around a defender and the shot that went past David Kickert’s glove. Austria tied the scores with Manuel Ganahl scoring on a rebound 90 seconds later and Michael Raffl added another goal in the first period to lift Austria to 2-1 lead.

Italy responded with the same tactic in the second period. Simon Kostner tied things up from the slot and Marco Rosa put Italy in the 3-2 lead.

Raffl’s second of the night tied the game up again, and after the goalless overtime, a shootout drama had to determine the winner and the team to get relegated.

Italy’s Sean McMonagle became the hero in the seventh round of the shootout with a nice backhand deke to put the game away at 4-3.

It was the last game at the 2019 worlds for both teams.