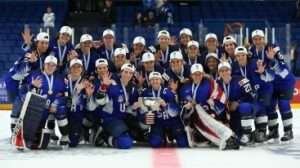 The host Finns, who won their first silver medal ever, were heartbroken after they thought they’d won it all in overtime. Goalie Noora Raty put on a goaltending clinic on her hometown ice in Espoo, as the U.S. outshot Finland 52-27.

“Obviously that was such an exciting game for them to take us to a shootout,” said U.S. goalie Alex Rigsby, who conceded just one goal to Minttu Tuominen on four Finnish shootout attempts. “Props to Noora. She played an unbelievable game. I think it’s really great for the sport as well, for us to be able to play against Finland and for them to come out and get a silver medal here in their home country.

“Sport is tough and hard sometimes, but after the game you need to accept what is in the scoreboard,” said Finnish captain and tournament MVP Jenni Hiirikoski. “Life goes on, and we will be super proud of what we have done here.”

It’s the eighth time in nine years that the Americans have prevailed, their string only broken by Canada in 2012.

“We have a really special group,” said Hilary Knight, who led the tournament with seven goals and 11 points and was named to the all-star team. “I can’t say it enough. It’s really magical to be in our room and something we try to cultivate every single time we get together.”

This is the second straight year an IIHF women’s final has been decided in a shootout. But this thriller was even more over-the-top and unimaginable than PyeongChang, where the U.S.’s Jocelyne Lamoureux-Davidson’s goal and Maddie Rooney’s final save on Canada’s Meghan Agosta were the difference.

The 4-on-4 sudden-death overtime was full of wild incidents.

Petra Nieminen thought she had scored the deciding goal at 11:33 of overtime. Hiirikoski made an end-to-end rush and her initial shot was stopped by Rigsby. As Rigsby slid out of the net and Hiirikoski made contact, with the U.S.’s Kacey Bellamy right on top of her, Nieminen banged the rebound into the gaping cage.

A lengthy video review ensued, reminiscent of when Canada’s Anson Carter scored in overtime on Sweden’s Mikael Tellqvist in the 2003 IIHF World Championship gold medal game. When the officials waved the goal off for apparent goalie interference, the fans howled in derision.

“It almost would have been easier if we’d lost 5-0,” said Raty. “I’d probably be happier right now. But we were so close. We could taste it — “Holy cow, we’re world champs” — and they take it away.”

Asked how confident she was that it was not a goal, Rigsby offered: “I was very confident. I was trying to rally the team up so they weren’t getting too down. Obviously it was a long break for them to try to figure it out. But for me to get interfered with like that, it shouldn’t be a goal.”

The Finns did get a power play, as Rigsby was also called for tripping on the play, but they couldn’t capitalize, and also couldn’t score when Megan Keller was called for slashing at the end of overtime. Earlier in overtime, the U.S. narrowly failed to capitalize with Finland’s Venla Hovi in the box.

Finland’s first silver medal ever is an incredible achievement, especially considering that most observers figured the host nation was bound for bronze for the 13th time at this tournament. No European nation has ever played in the final before. As great as the 18 previous all-North American derbies have been, this tilt proved definitively that Finnish female players can dazzle at the highest level too.

“I hope a lot of little girls were watching today and they can start dreaming of playing in the finals,” Raty said. “I’ve been in a bronze medal game too many times. Sometimes you just want more. We’ve always believed we can do this, but still a lot of people didn’t give us a chance. So proud of my teammates.”

Even though the Finnish women couldn’t complete their own answer to the U.S. men’s 1980 Olympic “Miracle on Ice” victory over the Soviets in Lake Placid, what happened in Espoo over the last 11 days should retain a certain fairy-tale quality for Finnish fans.

This final was always destined to hinge on Raty’s ability to deny America’s overwhelming firepower. The U.S. entered the final with 39 goals-for to Finland’s 20.

The energy was through the ceiling at Espoo’s Metro Areena, starting with the pre-game introductions. The first period raced by at an extraordinary tempo, and the entire game was pure flow and thrills.

“I think this is Finland’s best team we’ve ever seen,” Knight said.”You’ve got to tip the cap to them. They played a great game. They locked us down when they needed to and got bounces when they needed to. It’s great for women’s hockey to have different teams in the final.”

While the Americans outshot Finland 17-4 in the first, Raty showed some Patrick Roy-like swagger with the way she caught and deflected pucks.

The hosts did a good job of keeping shots mostly to the outside and competed hard in one-on-one battles. And while it was defence-first for coach Pasi Mustonen’s troops, gone are the days when Finland simply hangs back and clogs up the neutral zone. The Finnish flag-waving crowd of 6,053 mounted exuberant chants of “Suomi!” to counter the minority cries of “USA!”

The U.S finally opened the scoring at 15:46 of the second period. Pankowski got the puck from U.S. captain Kendall Coyne Schofield, crossed the blue line on the right side and used Hiirikoski as a decoy to beat Raty low to the glove side. It was her fourth goal of the tournament.

With 1:31 left in the second period, the building exploded when Tapani notched the equalizer for Finland. Inside the U.S. blueline at the right point, Nieminen grabbed the puck and sent a diagonal cross-ice pass into the left faceoff circle for Tapani, who zapped it high past Rigsby on the stick side. Tapani got hot in these playoffs, notching the quarter-final winner against the Czech Republic and the semi-final winner against Canada.

Raty, who stepped up again in overtime with 14 saves, said: “I thought I made a lot of great saves, but if you want to win something, your goalie needs to be good.”

In 1849, the definitive version of the Kalevala, the Finnish national epic poem, was published. Now, 170 years later, the Finnish women’s national hockey team has begun to forge its own legend — even if it is written in silver letters rather than gold.

“It was a huge step for us, but we were here to win gold today,” said Michelle Karvinen. “It’ll take a little time to get over this, but I’m still proud of the team.”

Of her own future, Raty said: “I have to take a summer off and see what I want to do with my career. A lot is going to depend on what is going to happen with the North American leagues. Obviously I’m under a China contract, and now that we don’t have a league in the CWHL, I have to see what China is going to decide, if I’m going to go back or not. I think there’s a lot of moving parts.”

Earlier, the Canadians settled for bronze after beating Russia 7-0. Canada holds the record for the most consecutive Women’s Worlds golds with eight straight between 1990 and 2004, and 10 in total. This was the ninth American gold.

Looking at the months to come, Knight said: “I think our sport’s in great hands. We have a lot of talented, young, powerful women that feel empowered to shape the future of this sport as they see fit. So you’re going to see some probably exciting times in women’s hockey to come.”

In 2020, will the Americans make it six in a row? Can Canada return to the top of the podium? Or will the Finns go all the way? Join us again next year at the IIHF Ice Hockey Women’s World Championship in Halifax and Truro, Nova Scotia, Canada.