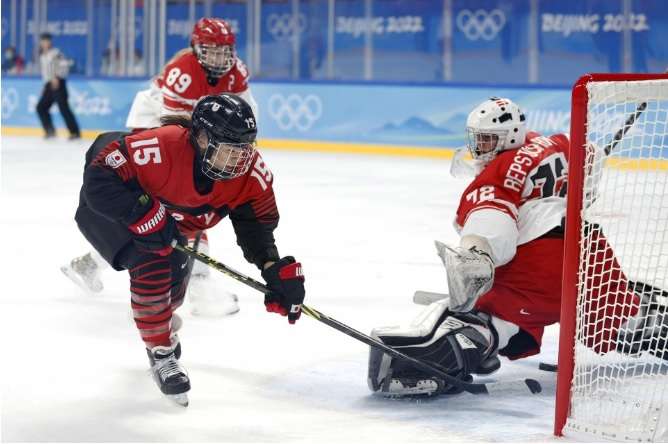 Japan, ranked sixth in the world and appearing in their third straight games, finished clinically against the 11th-ranked Olympic debutant at Wukesong Sports Centre as they moved top of the five-nation Group B from which the top three teams will advance.

Two days after beating Sweden 3-1, Japan could have gone behind soon after the drop when Josefine Persson put the puck between a Japanese defender’s legs before her close-range shot was stopped by Japan goalkeeper Nana Fujimoto.

But Japan grew into the game with multiple attempts saved before Hikaru Yamashita finally broke the Danes’ resistance near the 11-minute mark, the 21-year-old streaking across goalie Cassandra Repstock-Romme on a breakout before calmly threading in her shot from close range.

The goal opened the floodgates as Haruka Toko doubled the lead two minutes later, breaking clear down the left and scoring through the five-hole.

Two days after scoring the winner against Sweden, Rui Ukita made it 3-0 a minute later as she also scored on a counter, crisply moving to her right in a one-on-one with Repstock-Romme to score. The goalie was pulled immediately after.

Ayaka Toko scored a superb fourth three minutes into the second period following a pass from her younger sister Haruka, finding the left top corner with a shot from distance to make it four.

Mia Bau got one back for Denmark 10 minutes into the second period with a shot from the left crossing the line at the near post, but Japan restored its four-goal cushion just before the second break with a well-controlled effort from Akane Shiga finding top right of the goal.

Haruna Yoneyama buried Japan’s sixth from a tight angle nine minutes into the final period and although Josefine Jakobsen squeezed in Denmark’s second moments before the final buzzer, the result was clear.