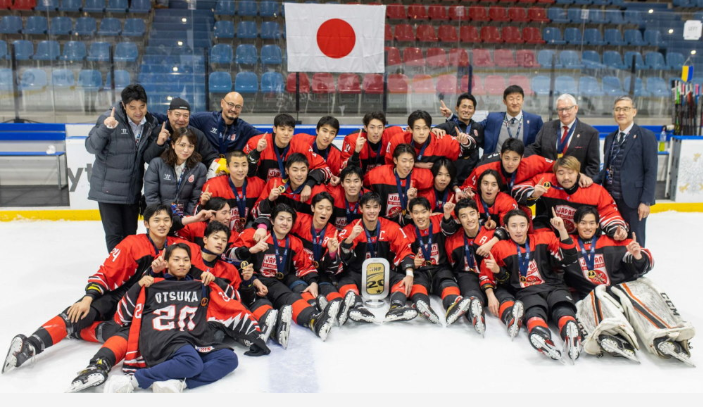 The Japanese players celebrate after receiving their gold medals and trophy at the 2023 IIHF Ice Hockey U20 World Championship Division I Group B.

Japan’s juniors are back in the second tier of international competition after taking gold in the 2023 IIHF Ice Hockey U20 World Championship Division I Group B in Bytom, Poland. A final-day win over Ukraine saw the team jump into top spot and secure its place in next season’s Division IA competition.

Now the Japanese are just one promotion away from the elite for the first time since 2010/11. That was the last season before the Division I was split into A and B groups.

Ukraine suffered its first loss of the competition in that game despite a four-point game from forward Mykyta Sydorenko and had to be content with silver. Italy took bronze, despite a surprise loss to Estonia on the last day.

Going into Saturday’s deciding game, Ukraine had the advantage. Olexander Bobkin’s team won each of its four games with a 19-5 goal difference. Japan, meanwhile, dropped an overtime verdict against Italy and knew that only victory in regulation would be good enough for gold.

And the Japanese flew out of the blocks in the first period, swarming around the Ukrainian net from the opening faceoff. The game was barely a minute old when Savva Serdiuk was forced to make a big stop to deny Fuji Suzuki’s backhand effort after Shiryu Koiwa sliced through the defence.

Japan’s head coach, Perry Pearn, wanted his players to make the most of their mobility and they certainly did so.

“We’re not a big team but our speed and quickness is really noticeable,” Pearn said. “We’re much better skaters overall than most of the teams in this tournament. That has to be our strength and what we have to rely on.

“The flip side of it is that we are not so big as some of the teams – Ukraine would be a good example – so we have to be really smart in terms of winning battles by playing a different way than probably a team like Ukraine is able to play.”

Ukraine’s physical strength played a part in the opening goal, with Sydorenko holding off the attentions of Ichiro Takahashi before his reverse pass set up Illia Dubsky. However, that 10th-minute marker was against the run of play and Japan was soon level thanks to Rukia Morita.

Much of Japan’s success was down to the work of the coaching staff in the buildup to the game, according to Ukraine’s forward Olexi Dakhnovskyi.

“They were the best team because they were so prepared for us,” he said after the game. “They were the most disciplined team we faced. They were ready and it was like they knew what we were going to do on every centimetre of the rink.”

In the second period, Japan converted that preparation into a commanding lead. During a passage of four-on-four play, that extra mobility paid off when Junya Owa released Suzuki to make it 2-1. Another 68 seconds went by and Yutaka Toko made it 3-1, chasing Serdiuk from the net. Ukraine’s incoming goalie Hlib Artsatbanov lasted less than four minutes before allowing a goal from Kotaro Murase, and Taisetsu Ushio made it 5-1 before the second intermission.

Ukraine’s golden dream was almost over, but the impressive Sydorenko battled hard to keep his team in contention. The 18-year-old from Donetsk missed the previous game against Korea due to injury but demonstrated a full recovery. He scored a hat-trick in the third period, but it was not enough to salvage the game. A flurry of penalties brough two quick power play goals for the Japanese as the game finished
at 7-4.

For head coach Bobkin, the disappointment of missing out on promotion was tempered by the enthusiasm his young players showed for representing their country. Ukraine’s young players are dispersed throughout the world, with only two currently based in their homeland. But that did not prevent them from answering the call.

“The most important thing is that it was not hard to get everybody to our team, to our training camp,” Bobkin said. “Everybody on the team understands the importance of playing at the World Championship, especially at this hard time for our country. They are really proud to represent us at the tournament.”

Japan’s juniors on the rise

For Japan, gold here represents another step up the junior hockey ladder. The team won promotion to this level in 2020 and is moving up again at the second attempt (the 2021 tournament was cancelled during the pandemic). Head coach Pearn believes that Japan’s youngsters can acquit themselves well at a higher level.

“Before this tournament we played Hungary, who are in Division IA,” he said. “We won one game 4-3 and lost the other 3-5 so I think the top teams in this group are going to be very competitive with the teams in the next group as well. I think it speaks volumes for junior hockey, that this is strong in many countries.”

That strength resulted in a competitive tournament, with most games in the balance until the closing moments. Poland bucked the trend on the final day, thrashing Korea 11-2 to finish its tournament in style. That result was vital for the host, which needed the victory to escape relegation. It also proved costly for the Koreans, who dropped into sixth place after Estonia edged Italy 2-1 to secure its survival at this level. Despite that loss, Italy still had enough to claim bronze behind Japan and Ukraine.

Victory in Bytom is the first success for veteran coach Pearn following his move to Japan. The 71-year-old will remain active in the Far East as he looks to mastermind a promotion push for the men’s team, which also competes in Division IB. Pearn brings a wealth of experience to the role: two decades of experience as a bench coach in the NHL, plus taking charge of Team Canada at the 2019 IIHF Ice Hockey Women’s World Championship.

The tournament directorate nominated Italy’s Damian Clara as the top goalkeeper. He played every minute for his country, stopping 91.67% of shots for a GAA of 2.58. Japan’s Junya Owa, whose three helpers against Ukraine saw him finish the competition with 6 (1+5) points, was named best defender. Danylo Korzhyletsky of Ukraine was selected as the best forward. Poland’s Krzysztof Macias led the competition in scoring with 10 (7+3) points. Kotaro Murase of Japan also had 10 (2+8) from his five games.