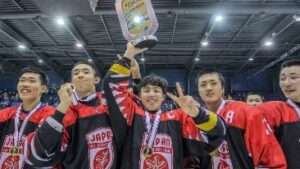 Japan’s dazzling skills and lightning speed brightened up a grey and rainy week in Lithuania’s capital Vilnius, as they raced through the 2020 IIHF Ice Hockey U20 World Championship Division II Group A with an unblemished record.

In front of a full house of 2,387 at the Pramogu Arena, Japan defeated hosts Lithuania 5-2 during the final game of the tournament to secure the gold medals and promotion to the 2021 IIHF Ice Hockey U20 World Championship Division I Group B.

Japan’s first line led the way against Lithuania, with centreman Teruto Nakajima flanked by forwards Yu Sato and Chikara Hanzawa notching three points each. Nakajima was also the tournament’s top scorer with 5+8 in five games while Hanzawa – voted Best Forward of the tournament – followed closely on 7+5.

Earlier in the U20 Division IIA, Japan had opened their promotion campaign by beating Great Britain 6-3 before blanking both Romania and Spain 8-0 and then scoring double digits against Serbia in a 10-2 win. Being in a class of their own in Vilnius, Japan found the back of the net on 37 occasions while conceding only seven in five games.

Netminder Eiki Sato was selected as the Best Goaltender of the tournament, aided by solid defending that saw Japan go through a spell of 134:23 minutes without conceding a goal.

Heading into their Sunday night showdown against hosts Lithuania, Japan needed a single point to finish top. Lithuania, on the other hand, required a regular-time win to leapfrog Great Britain and Japan and get their hands on the gold medals.

The new President of Lithuania, Gitanas Nauseda, had barely taken his seat next to Dainius Zubrus, Lithuania’s hockey president and legend, up on the tribune before Japan had opened the scoring. 17-year-old Yu Sato saw his effort find a way past an unlucky Nikita Kuzminov and into Lithuania’s net after just 13 seconds.

Buoyed by their dream start, Japan soon after staved off a two-minute minor penalty as Lithuania battled energetically with high forechecking in an attempt to put pressure on Japan’s build up play. Heading into the halfway stage of the first frame, Japan doubled their lead as Rioto Takeya snapped a shot from the right boards through traffic fooling Kuzminov after 9:28.

Backed by a sea and yellow and black up the stands supporting their home favourites, Lithuania’s uphill struggle became steeper with 4:11 left to play of the first frame. Yu Sato charged in towards the net from the left side with Hanzawa stabbing home the puck to stretch their lead of 3-0. Lithuania’s head coach Doug Boulanger reacted as Kuzminov in Lithuania’s net was replaced with the more experienced Laurynas Lubys entering the fold.

“This was the hardest game for us in this tournament,” said Japan’s head coach Teruhiko Okita. “Lithuania is an offensive team with good players and there were also a lot of people coming to watch the game which many of our players are not used to,” he continued.

With Lithuania now having to chase the game, they matched Japan evenly for long spells of the second period. Shots were tied 9-9 but once again it was the Japanese who capitalized. Thanks to a brilliant piece of combination of skill and quick transition, Hanzawa picked out Yu Sato, who flew down the left wing and ripped a wrister high past Lubys for his second of the evening to silence the home crowd.

But this crop of Lithuanian youngsters was to show great resilience as they refused to wilt down. Heading into the third frame, they got a lifeline when Timonas Mazulis was picked out by Martynas Grinius in front of Japan’s net to pull one back for Lithuania at 48:08. The roles were reversed with 6:58 left to play of the frame. Japan’s Yuto Taneichi serving a tripping minor and Grinius scored on a rebound by Eiki Sato to send the home crowd back to their feet with “Lietuva! Lietuva!” ringing out from the stands.

Japan’s head coach Okita took a time-out to cool heads and despite Lithuania frantically trying to claw themselves back into the game, any faint hopes of a comeback were crushed with 2:09 left of the game when Nakajima hit the final nail in the coffin with his 5-2 goal.

“We played well during the first and second period. Then in the third they came back, but we took a time-out and once again talked about what we needed to do,” said Japan’s Hanzawa as he singled out the key-component in Japan’s recipe for success in Vilnius. “All our guys play for the team. We are not selfish, but always playing for each other as a hard working team.”

Behind the runaway winners, Great Britain improved on last year’s third spot by finishing with the silver medals, despite the omission of Arizona Coyotes draft pick Liam Kirk.

Following their two defeats against Great Britain and Japan, hosts Lithuania had to settle for bronze, while newly promoted Serbia, who could have gotten something out of four out of their five games in Vilnius, finished winless to return straight back to Division IIB.