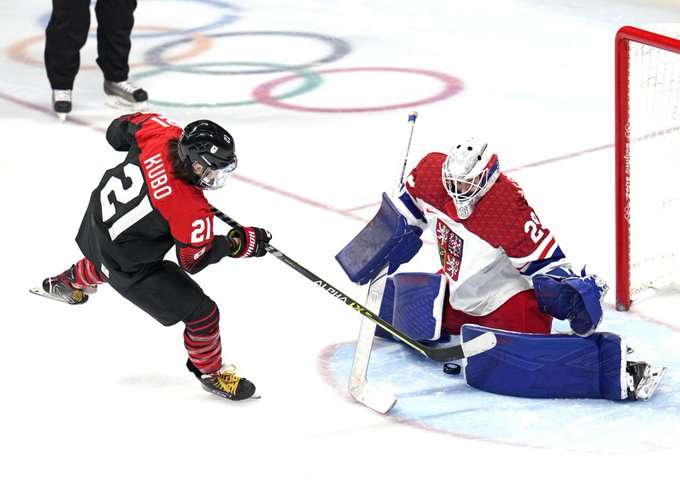 Japan’s Hanae Kubo (21) scores in a penalty-shot shootout against the Czech Republic in the preliminary round of the women’s ice hockey at the Beijing Winter Olympics.

Japan progressed to the women’s ice hockey quarterfinals as Group B winner on Tuesday at the Beijing Olympics, beating the Czech Republic 3-2 after a penalty-shot shootout.

Haruka Toko scored both goals for Japan during power plays in regular time but the Czechs twice tied it at Wukesong Sports Centre. Both teams were already through but desperate for a win, with a more favorable draw in the last eight going to the group winner.

“I’m really happy as topping the group was our first target,” said Toko, whose goals were both assisted by her older sister Ayaka. “I felt we had to top the group to get a medal. I feel we took a step closer to it.”

“We will definitely be the underdog so we’ll go into the game with the mentality to challenge our opponents and get the win at any cost to progress.”

Japan struck early after the Czechs had Katerina Mrazova penalized for interference. The opener came just four minutes in, Toko’s smacking the rebound past keeper Klara Peslarova into the top right corner after her first shot was blocked.

Japan survived two power plays from their European rivals on either side of the first break but the game was level seven minutes into the second period, Tereza Vanisova picking up a loose puck in the Japanese half before Denisa Krizova just barely squeezed in a close-range shot off the desperate keeper Nana Fujimoto.

Japan struggled to get shots until another power play, 13 minutes into the second period, when Toko flashed her shot just wide.

Two Czech penalties gave Japan a five-on-three advantage with 55 seconds left in the period. Japan capitalized seconds into the third period, with Toko getting her second.

With just over 20 seconds remaining for the two-player advantage, Japan pinned their opponents back and Toko picked up the rebound to score after her initial shot hit the left post.

Japan’s pressure high up the rink left Suzuka Taka with a huge chance but her shot was blocked, and the Czechs tied again six minutes into the final period as Natalie Mlynkova’s clever long-range went in past Fujimoto, who was screened.

Vanisova had the chance to turn the game around after a misplaced pass from Japan allowed her a break-away, but Fujimoto denied her shot superbly, and her right leg denied Vanisova again in the final action of overtime to force the shootout.

Japan’s second penalty-taker, Hanae Kubo had the puck, struck Peslarova’s skates but somehow trickled across the line, while Fujimoto thwarting all five Czech attempts to secure the win.

“For us as a team, it’s only one stage along our journey,” said Ayaka Toko. “We’ve been aiming for a medal these past four years and we’re only at a start. We won’t want to say ‘we’re close,’ we want something tangible.”